Although HIV became a human disease vector only recently, possibly through transmission to humans from chimpanzees in central Africa, it is already clear that AIDS is one of the most serious diseases in human history (figure 3). The fatality rate of AIDS is 100%; no patient exhibiting the symptoms of AIDS has ever been known to survive more than a few years without treatment. Aggressive treatments can prolong life but how much longer has not been determined. However, the disease is not highly contagious, as it is transmitted from one individual to another through the transfer of internal body fluids, typically in semen and in blood during transfusions. Not all individuals exposed to HIV (as judged by anti-HIV antibodies in their blood) have yet acquired the disease. 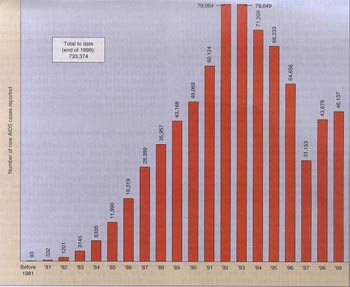 HIV positive patients that have not fully exhibited AIDS symptoms can be more effectively treated with drugs. Until recently, the only effective treatment for slowing the progression of the disease involved treatment with drugs such as AZT that inhibit the activity of reverse transcriptase, the enzyme needed by the virus to produce DNA from RNA. Recently, however, a new type of drug has become available that acts to inhibit protease, an enzyme needed for viral assembly. Treatments that include a combination of reverse transcriptase inhibitors and protease inhibitors appear to lower levels of HIV, though they are very costly. Efforts to develop a vaccine against AIDS continue, both by splicing portions of the HIV surface protein gene into vaccinia virus and by attempting to develop a harmless strain of HIV. These approaches, while promising, have not yet proved successful and are limited by the fact that different strains of HIV seem to possess different surface antigens. Like the influenza virus, HIV has high mutation rates that result in antigen shifting, making it difficult to develop an effective vaccine.

AIDS destroys the ability of the immune system to mount a defense against any infection. HIV, the virus that causes AIDS, induces a state of immune deficiency by attacking and destroying CD4+ T cells.