1. To defeat an infectious disease, you must control its vector.

The Battle Against Infectious Disease

Very few students reading this chapter have been seriously affected by infectious disease. One of the greatest triumphs of modern medicine has been the control of infectious disease. Particularly with the advent of antibiotics and immunization, it has become possible to eliminate or treat diseases which used to kill tens of thousands of Americans each year. Largely safe from the threat of dying due to infection, it is easy for us to forget that the infectious diseases that killed people in the past are perfectly capable of doing it again. In less fortunate countries lacking the modern medical care we take for granted, infectious disease remains a real danger. Nearly 2 million people will die of malaria this year, and some 3 million of tuberculosis (TB).

Much of our success in combating disease has come from understanding the transmission of particular diseases from one person to the next. Some disease agents pass directly from one individual to another; others are transmitted by living infectious agents, called vectors. A vector is a living agent that transmits a disease. One of the great lessons of the long battle against infectious disease, perhaps the greatest lesson, is that to control the spread of a disease, you must control its transmission.

As a way of understanding the problems posed by infectious disease, and the success we have had in combating it, it is useful to take a look at some of the big killers, their vectors, and the reservoirs of these vectors.

A variety of serious human diseases are transmitted by flea vectors that reside on rodents (rats and mice), a reservoir found worldwide. Among the most important of these rodent diseases are bubonic plague and typhus.

Bubonic Plague. Plague is a deadly disease caused by the bacterium Yersinia pestis. The plague bacteria are carried from one person to the next by fleas on rats (also wild rodents and squirrels). Common in wild squirrel populations in the western United States today, plague killed one-fourth of the population of Europe in the 14th century. Plague is not the major killer it used to be, as its 14th century reservoir, rats, are not as numerous as they used to be and dont move about, carrying plague from one focus of infection to another in the way that used to spread the disease rapidly within human communities.

Typhus. Typhus is one of the greatest killers of people in recorded history. It strikes in times of crowding and poor sanitation. It is caused by a small kind of bacteria, Rickettsia: R. typhi is transmitted from one human to another by the bite of rat fleas, and R. prowazekii is transmitted from one person to another by human lice. Soon after infection, an acute fever develops, and a rash appears on the chest only on the 5th day. One of the most deadly of diseases, typhus has a peak untreated mortality rate of 70%seven in ten people contracting typhus die of it. In the Crimean war (fought between a British/French/Turkish Coalition and Russia in 1854-1856), before the typhus vector and its reservoir was understood, this disease had a devastating impact:

Eighty percent of casualties and 62% of deaths in the Crimean War were due to typhus! The British, horrified, set out to understand typhus better, and learned that the disease passes from one human to another in two ways: on the lice that often inhabit an unbathed soldiers hair, and on fleas carried by rats from one person to another. To control the disease, they set out to eliminate the vector. Rats were ruthlessly exterminated in army camps, as were lice on soldiers heads. Army camp sanitation and bathing were improved. In the first world war, the British had not one death due to typhus. The Russian army, which adopted none of these measures, lost over a million soldiers to typhus.

Among the most contagious and deadly of infectious diseases are those carried by arthropodsprincipally flying insects. The greatest killer among these diseases is malaria.

Malaria. In 1941, more than 4,000 Americans died of malaria. In the year 2000, by contrast, only five people died of malaria in the United States. The key was a discovery made many years before in the summer of 1897 by an English physician, Ronald Ross, working in a remote field hospital in Secunderabad, India (figure 2). Malaria, which took more than a million lives in India that year, was known to be caused by a microscopic parasite called Plasmodium, which could be found in the blood of malaria victims. However, no one was sure how the parasite was transmitted. How did infected people acquire the parasite? Working alone, Ross discovered the answer to this key question. 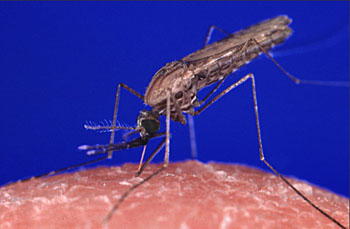 Figure 2
The malaria vector. Control over malaria only became possible when a British doctor, Ronald Ross, discovered in 1897 that mosquitoes transmitted the disease from one person to the next.

Ross observed that patients in the field hospital who did not have malaria were more likely to develop the deadly disease in the open wards (those without screens or netting) than in wards with closed windows or screens. This suggested to Ross the hypothesis that in the open wards, mosquitos, a kind called Anopheles, were spreading the disease from patients with malaria to patients who did not have the disease. To test his hypothesis, Ross compared the blood of mosquitos that had fed on malaria patients with the blood of mosquitos which had fed on uninfected individuals. In the blood of mosquitos that had fed on malaria patients he found parasites; in that of mosquitos that has fed on uninfected individuals, he did not. He carefully dissected each mosquitos stomach and found that mosquitos that had fed on malaria patients contained living malaria parasites. By contrast, when he gathered newly-hatched mosquitos that had not yet eaten, fed them blood from people who did not have malaria, and examined their stomachs, he found no malaria parasites. Ross went on to show by careful dissection that the parasites spread through the mosquitos body to its salivary glands, passing in the saliva to anyone the mosquito bites. The idea that malaria epidemics could be prevented by combating the mosquito vector was first put forth in a letter written by Ross to the government of India in 1901. Before the end of that year, American army doctors had eliminated almost all malaria from Havana, Cubawhere malaria had been at an epidemic stageby greatly reducing the mosquito population. Malaria was virtually eliminated in the United States when discovery of DDT and other insecticides made it possible to eliminate the Anopheles mosquito vector by spraying.

Yellow Fever. Yellow fever is caused by a flavivirus, and spreads from one human to another by the bite of mosquitos. Infection results in a high fever that is often fatal. If untreated, this disease has a peak mortality of 60%. During construction of the Panama Canal early in the last century, yellow fever killed in excess of 20,000 before American army doctors learned that mosquitos were the vector transmitting the virus. Strenuous programs to eliminate mosquitos quickly brought the yellow fever epidemic in the Canal Zone under control.

Some of the most serious infectious diseases are transmitted directly from one person to another without a vectorin a very real sense, we ourselves are the reservoir. Among these diseases are influenza, one of the greatest killers of all time, killing 20 million in 18 months in 1918-19, smallpox, hemorrhagic fevers like Marburg and Ebola, tuberculosis, and cholera.

Cholera. Another of the great killers, cholera is a bacterial infection causing severe diarrhea that can lead to death by dehydration. Peak mortality is 50% if the disease goes untreated. Like typhus, cholera is a major killer in times of overcrowding and poor sanitation; over 100,000 died in Rwanda in 1994 during a cholera outbreak. There have been six major pandemics of cholera in the last two centuries. During the epidemic in London in the 1850s, John Snow linked the transmission of cholera to consumption of water contaminated with human wastes. In an attempt to understand the epidemic, he carefully mapped the location of each fatality. Snows map showing cholera deaths in London in 1854 (figure 3) enabled him to pinpoint a well on Broad Street as the source of the epidemic. The well was contaminated with human feces, suggesting for the first time that poor sanitation was the culprit. The disease is controlled by good sanitation, which prevents its spread from one individual to another. The infectious agent that causes this disease was not clearly recognized until Robert Koch discovered the causative bacterium, Vibrio cholerae, in 1883. 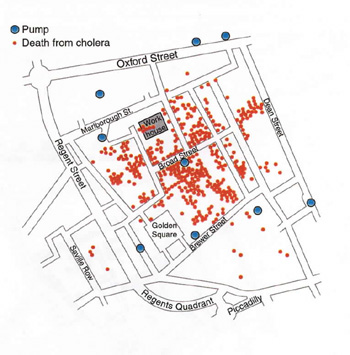 Figure 3
Discovery of how cholera spreads. There have been six major pandemics of cholera in the last two centuries. During the 1850s London epidemic, John Snow made a map of cholera deaths in London, enabling him to pinpoint a feces-contaminated well on Broad Street as the source of the epidemic.

The killer infectious diseases are kept under control by controlling the transmission from one human to another.