A Closer Look at Smallpox

Smallpox has been one of the most deadly diseases in human history. Caused by a virus named variola (from the Latin word for spotted), smallpox is an ancient human disease. Introduced to the New World by one infected slave in Cortezs second voyage, smallpox had a devastating effect on the American Indian population, which had no native immunity. While there are no precise numbers, roughly 90% of the Indian population of Mexico and Central America died within 100 years, over 12 million people. Later, in New England, the Native American population went from 72,000 in 1600 to 8,600 in 1674, the deaths largely from smallpox. The Huron Indians lost two-thirds of their population in eight years! These numbers are of particular interest today, because the American smallpox vaccination program stopped in 1980, and the vaccine only protects effectively for 7-10 years. Americans today have never been exposed to smallpox, and are as vulnerable as the Indians who first met Cortez.

Smallpox is highly infectious, passing in the air within tiny droplets of moisture from infected individuals to others. For 12 days there are no symptoms, as the virus multiplies within an infected individual. For several days before onset of symptoms, virus levels are high enough that the person becomes infectious, spreading the virus to others by the simple act of breathing. On about the twelfth day a fever appears, soon followed by a rash and spots all over the body. Over a period of days the spots become disfiguring pustules and the fever continues. One in three infected individuals die.

The Eradication of Smallpox

Humans are the only hosts of the smallpox virus. No animal reservoirs exist. Fortunately, an effective vaccine exists. Indeed, vaccination was invented by Edward Jenner in the 1790s to combat smallpox by inoculating people with its harmless relative, vaccinia (cowpox). Thus if all susceptible people can be inoculated, it should be possible to eradicate the disease.

Officials of the World Health Organization of the United Nations reported in 1948 that widespread vaccination had eliminated smallpox from North America and Europe. By 1959 the disease had been eliminated throughout much of the Western Hemisphere, and an intensive worldwide campaign was initiated. As late as 1967 smallpox was still common in thirty three countries, with ten to fifteen million cases occurring that year.

Attention then switched from attempts at universal vaccination to a focus on individual outbreaks. Every time a case was reported, the sick individuals were isolated and everyone in the vicinity was vaccinated. Asia was clear of the disease by 1975. By 1977 Somalia, in Africa, was the last country on earth in which the scourge of smallpox persisted. A 23-year-old resident of Merka, Somalia named Ali Maow Maalin contracted the last known case of naturally-occurring smallpox anywhere in the world in 1977 (figure 7). 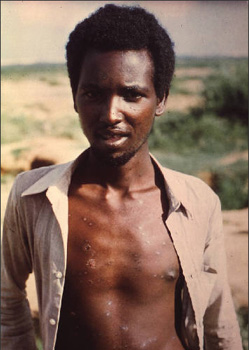 Figure 7
The last smallpox victim. Ali Maow Maalin of Somalia is the last known individual in the world to have contracted smallpox, which left permanent lesions on his chest.
Source: Centers for Disease Control and Prevention

The Continuing Threat of Smallpox

Smallpox is an ideal bioweapon, if the object is mass destruction of life. Russia produced 20 metric tons of variola virus during the high-point of its bioweapons programs, only destroying this lethal harvest in the late 1980s as Russia dismantled its bioweapons effort.

There has not been a reported human death of smallpox since the death of a laboratory worker in 1978. Because the smallpox virus requires humans to spread, its total absence as a disease anywhere in the world ensures that it is extinctexcept in two government research laboratories, one at the Centers for Disease Control and Prevention in Atlanta, and the other in a laboratory in Russian Siberia. The destruction of these last samples of the virus was delayed repeatedly as scientists studied them, each country feeling the need to develop better vaccines lest the other use the virus as a weapon. The possibility that another nation, or a terrorist group, has obtained the virus led the United States in 2001 to order the production of 300 million doses of smallpox vaccine, enough to vaccinate every American.

Smallpox has been eradicated as a disease, but there is fear that the virus may find its way into terrorist hands.