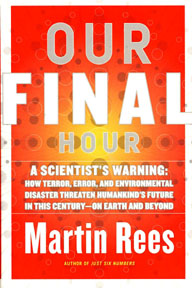 If Chicken Little was a scientist, he would have writtten this book. Subtitled A Scientists Warning: How Terror, Error, and Environmental Disaster Threaten Humankinds Future in This Century — On Earth and Beyond, this short book is is essence a catalogue of things that might go wrong, and what would happen if they did. On the principle that Shit happens, Rees gives civilization as we know it only a 50-50 chance of surviving the 21st century. One of the scarey about Our Final Hour is that the man who wrote it is no poorly informed science writer. Martin Rees is a Cambridge Professor and Britains Astronomer Royal, one of the worlds most brilliant cosmologists. Rees deadpan account of all the ways the sky might fall can be scary when the threats he sees are credible, like bioterror, nuclear war, global warming, and asteriod impact. His account is downright irritating when the threats are less credible, like the potential creation of intelligent self-reproducing nanoparticles that might consume all living things (the subject of the science fiction novel by Michael Crichton, Prey), or the one in 50 million possibility that an experiment by physicists might collapse all matter on earth into exotic dense particles called strangelets ( it didnt). Rees, a long-time arms control advocate, argues that science is too important to be left to scientists. Whatever one makes of nanoparticles or strangelets, his point seesm to me well taken.