This week the world’s AIDS researchers held the 17th Annual AIDS Conference in Mexico City. The news is not good.  AIDS (acquired immunodeficiency syndrome) was first recognized as a disease in the United States in June of 1981.  130 Americans died of AIDS that year.  By the end of 2006 in the United States, more than 565,000 individuals had died of AIDS, and some 1.3 million others were thought to be infected with HIV (human immunodeficiency virus), the virus that causes the disease. Worldwide, 33 million are infected, and 25 million have died. HIV apparently evolved from a very similar virus that infects chimpanzees in Africa when a mutation arose that allowed the virus to recognize  human cells. 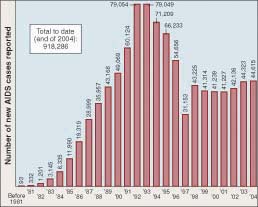 The HIV virus attacks and cripples the immune system by infecting its cells. HIV-infected cells die after releasing replicated viruses that proceed to infect other cells. Over time, the body’s entire population of immune defense cells is destroyed. With no defense against infection, any of a variety of commonplace infections proves fatal. Also, with no ability to recognize and destroy cancer cells when they arise, death by cancer becomes far more likely. More AIDS victims die of cancer than from any other cause.

The fatality rate of AIDS is 100%; no patient exhibiting the symptoms of AIDS has recovered. The disease is not highly contagious, because it is only transmitted from one individual to another through the transfer of internal body fluids, typically in semen or vaginal fluid during sexual intercourse and in blood transmitted by needles during drug use. However, symptoms of AIDS do not usually show up for several years after infection with HIV (typically 7-8 years), which means that infected individuals can unknowingly spread the virus to others.

Education and awareness campaigns in the United States have helped reduce the numbers of new AIDS cases.   At the peak of the outbreak in 1992-93, the United States was seeing 79,000 new AIDS cases each year.  Since 20060 the numbers have been less than half that, around 37,000 each year.  The good news, then, is that the AIDS epidemic has peaked.

The bad news is that there has been little luck in developing an effective AIDS vaccine. Many promising approaches have been tried, but none have worked.  In labs all over the world, its back to the drawing boards.

A lot of recent attention is being given to the possibility of preventing HIV infection by administering drugs already being used successfully to fight the virus in AIDS patients.

A variety of drugs inhibit the growth of HIV inAIDS patients. These include AZT and its analogs (which inhibit virus nucleic acid replication by blocking the action of the virus enzyme reverse transcriptase) and protease inhibitors (which inhibit the virus enzyme that cleaves the large virus proteins into functional segments). A combination of a protease inhibitor and two AZT analog drugs entirely eliminates the HIV virus from many patients’ bloodstreams.

In attempts to find a daily pill to avert HIV, researchers have for now focused on AZT-like drugs that inhibit virus reverse transcriptase.  Initial studies are testing tenofovir, emtricitabine, and efavirenz, often taken as a three-drug combo dubbed Atripla. Up to 15,000 people are expected to be participating in the clinical trials by the middle of next year.  Sites include Africa, South America, Asia, as well as the United States.

Many other drugs are being developed that target different phases of the viral infection cycle. To date there are six classes of drugs, described in the table and keyed to the diagram, that disrupts the ability of HIV to enter the cell, to replicate its DNA, and to form new viral particles. As of yet, there has been little drug development targeting the final phase of the infection cycle, viral exit (where new viruses leave the cell).  In principle, any of these drugs could also be taken to prevent HIV infection.  We should begin to get results from the reverse transcriptase inhibitors next year.  If they are promising, I would imagine these other drugs would soon be tested as well.