Every fall, about the time the leaves change, a few scientists become recognized as superstars. That is when the Nobel Prizes are awarded. Being a biologist, my interests focus on the science I know best, the Nobel Prize in Physiology or Medicine.

This year, the Nobel Prize in Physiology or Medicine recognized the great advances that have been made in understanding how our brains create mood and memory. The award was shared by three scientists — like a play in three acts, this understanding developed in three stages.

ACT ONE. Arvid Carlsson (University of Gothenburg, Sweden) Working at the NIH in the 1950s, Arvid Carlsson was one of an army of scientists trying to sort out how the brain changes from day to day. Mood and memory were blank slates, their mechanism a mystery, but brain scientists like Carlsson suspected that the bizarre zoo of chemicals present in the brain might provide a clue.

Measuring levels of dopamine in different parts of the brain, Carlsson found that there was an awful lot of it in the corpus striatum, the part of the brain that regulates movement. Was this just a coincidence, or might dopamine be a signal the brain uses to control movement?

In one key experiment, he and his colleagues gave rabbits a drug that depletes the brain’s dopamine, and looked to see if movement was affected. It sure was — the rabbits went into a stupor. The rabbits could be roused, however, if Carlsson then injected the rabbits with L-dopa, a chemical which the brain converts to dopamine.

In later work, Carlsson and others found that Parkinson’s disease, which causes tremors and loss of muscular coordination, results from degeneration of dopamine-producing cells in the corpus striatum. Not enough dopamine was made to allow proper control of movement. This led directly to the use of L-dopa as a therapy for Parkinson’s patients.

Carlsson work demonstrated that many other chemicals in the brain also act as important signals. One called seratonin, for example, seems to play a key role in establishing mood — a shortage of seratonin leads to depression. One way to offset such a shortage is to make the limited supply of seratonin go further. Prozac relieves depression by allowing individual seratonin molecules to keep signalling longer — like pulling the trigger of a signal gun not once, but again and again. ACT TWO. Paul Greengard (Rockefeller University) In the 1960s Paul Greengard took Carlsson’s work several steps further by figuring out how dopamine and serotonin molecules are able to trigger responses in target nerve cells. Back then, most researchers thought their effect was strictly electrical, a matter of admitting charged ions across nerve cell membranes. Greengard found that this was only part of the story.

Greengard found that the nerve signals dopamine and serotonin act not electrically, over in a flash, but biochemically, causing much longer-lasting changes. When a dopamine molecule bangs into a receptor protein on the surface of the target cell, this triggers release of an internal signal within the nerve cell, what researchers call a “second messenger.” This second messenger activates an enzyme in the cell that adds phosphate groups onto key proteins. Like lighting a fuse, this addition sets off a chain of biochemical events that modify the cell’s membrane, increasing or lessening its sensitivity to electrical signals in a way that persists for quite a while.

Kandel worked with Aplysia (the giant sea slug) because it has giant nerve cells that are easy to study. He found that slugs maintain short term memories of touches or electrical shocks, exhibiting heightened responses for days or weeks. What sort of changes produce this memory? Kandel found that the molecular mechanism for this short term memory involved Greengard’s phosphorylation process. Phosphates are added to proteins that form pores through the cell membrane for calcium and other ions involved in nerve signals. This makes future signals pass more easily — short term memory.

Many of the exciting advances in neurobiology of the last decades rest squarely on the pioneering work of Carlsson, Greengard, and Kandel. This year’s Nobel was richly deserved. 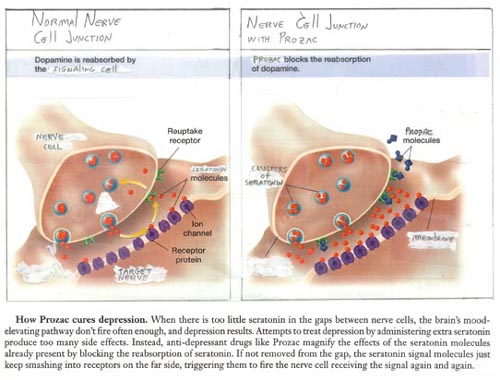