I hate fat. Particularly on me. There is a picture in our kitchen of the svelte 165 pound me that married my wife 18 years ago. I weigh 36 pounds more now, two pounds for each year, most of them adorning my middle. I hate that picture.

I am not alone in wishing for a thinner self. More than half of Americans are overweight, and we buy fad diet books like candy. While the U.S. Department of Agriculture is currently evaluating the most popular of these fad diets, I know of no reputable scientist who believes they really work.

Your body is your own worst enemy in trying to loose weight. When you overeat, your body dampens your appetite by producing a hormone called leptin. This leptin is carried by the bloodstream to the brain, where it turns off the “I’m hungry” signal, reducing your desire to eat.

The difficulty in actually loosing weight by dieting is that when you eat less, your body decreases its sensitivity to the leptin, and as a result you tend to be hungrier and eat more. In this way your body adjusts your appetite and metabolic efficiency to keep your weight at its current value.

That’s why administering leptin does not work as a treatment for obesity — it just makes you hungrier.

Not a very promising picture for us overweight fat haters, is it? So you can imagine my excitement this week when Dr. Frank Kuhajda of the Johns Hopkins University School of Medicine reported in the journal SCIENCE the discovery of a drug that causes mice to rapidly loose weight, with no apparent ill effects.

Kuhajda had been studying how our bodies make fat. The building blocks of fats are long molecules called fatty acids. These fatty acids are assembled like a pearl necklace, one two-carbon pearl at a time, by an enzyme called fatty acid synthase (FAS for short). Kuhajda set out to see if he could prevent the body from storing excess fuel as fat by inhibiting FAS.

There is a fungus chemical called cerulenin that is known to inhibit FAS, but it is unstable and so reactive that it is toxic to humans. Kuhajda’s team made a series of derivatives of cerulenin looking for a less reactive, and thus safer, FAS inhibitor. They tested hundreds of compounds. With one, called C75, they hit paydirt. It is as good an inhibitor of FAS as cerulenin, but is not toxic.

What happens to fat synthesis when you administer C75 to overeaters? When Kuhajda feeds it to obese mice, it has a dramatic effect: instead of not getting fatter, the mice begin to loose weight, a lot of it, and fast. Kuhajda reports that “The mice drop their weight like a stone, losing 25 percent of their body mass in a couple of days.”

Kuhajda must have been pretty surprised. The response to C75 was unexpected and powerful, like lighting what seemed a firecracker and getting a dynamite explosion. 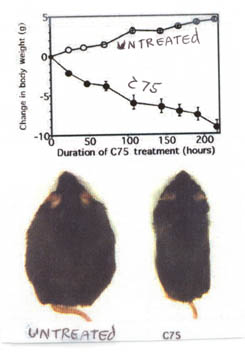 It turns out that when C75 inhibits the enzyme FAS, the two-carbon “pearls” that are prevented from assembling into fatty acids accumulate in the liver. This was expected. What was not expected was that, carried to the brain, the two-carbon pre-fat molecules act to suppress appetite. Treated animals eat just 10% of the food that untreated mice consume, dropping on average a third of their body weight.

Even more exciting, the response seems to bypass the leptin control of body weight. If you feed treated and untreated mice a reduced diet, both loose weight, but the C75-treated mice loose 45% more than untreated mice fed the same amount of food. C75 seems to ignore the leptin-mediated metabolic slowdown that in fasting animals compensates for reduced food intake. Kuhajda confirmed this by showing that C75 quells the appetites of mutant mice totally lacking the leptin hormone

What C75 is doing, in effect, is fooling the brain into thinking that the body is consuming food when it is not. Because neuropeptide Y levels don’t rise, appetite stays down. You see the beauty of it — you eat less, but don’t get hungry.

I want some of this stuff. Unfortunately, its not likely to be available anytime soon. Its not even clear that it will work in humans, or that it would be safe — the effects of C75 are pretty severe. But you can bet a lot of researchers will be working on it. Hope they hurry.