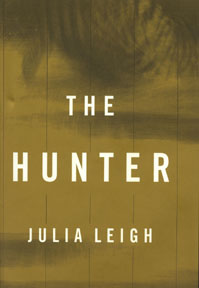 The Hunter is a little book, only 170 pages long. I read it in three hours. It is a strong, almost hypnotic short novel about a professional hunter sent to the frigid wilderness of Tasmanias plateau bya shadowly biotechnology corporation. The hunters job is to hunt down and kill for its genetic material a thylacine, if one exists. The last thylacine, the marsupial Tasmanian tiger, was thought to have died in a rural zoo in Tasmania in 1936, but rumors of a survivor on the desolate central plateau have recently surfaced. The professional hunter sets up a base camp with a young family whose father has gone missing on the plateau, and for ever-longer periods camps on the desolate plateau in search of his elusive prey. The Hunter is not divided into traditional chapters. In a continuous flowing narrative, the hunter tells the story of his pursuit of the thylacine, and reveals both his growing obsession with his prey and his increasing isolation from his fellow human beings. A kind of Tasmanian Heart of Darkness, the hunt for the thylacine becomes an expedition to the black interior of the hunters life. Spare, clean, and chillingly beautiful, this is an unsettling book that is difficult to remove from your mind. The film, made in 2011 and recently released on NETFLIX, does wonderful job of showing the harsh beauty of the Tasmanian interior.