The Evidence for Evolution

The Fossil Record. When fossils are arranged in the order of their age, a continual series of change is seen, new changes being added at each stage.

The Evolution of Horses. The record of horse evolution is particularly well-documented and instructive.

The Beaks of Darwin’s Finches. Natural selection favors stouter bills in dry years, when large tough-to-crush seeds are the only food available to finches.

3. Evidence for evolution can be found in other fields of biology.

The Anatomical Record. When anatomical features of living animals are examined, evidence of shared ancestry is often apparent.

4. The theory of evolution has proven controversial. 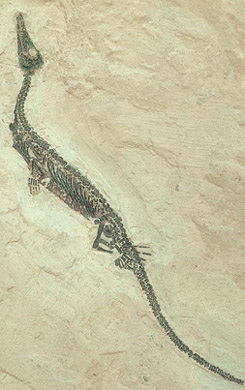 A window into the past. The fossil remains of the now-extinct reptile Mesosaurus found in Permian sediments in Africa and South America provided one of the earliest clues to a former connection between the two continents. Mesosaurus was a freshwater species and so clearly incapable of a transatlantic swim. Therefore, it must have lived in the lakes and rivers of a formerly contiguous landmass that later became divided as Africa and South America drifted apart in the Cretaceous.

Of all the major ideas of biology, the theory that today’s organisms evolved from now-extinct ancestors (figure 1) is perhaps the best known to the general public. This is not because the average person truly understands the basic facts of evolution, but rather because many people mistakenly believe that it represents a challenge to their religious beliefs. Similar highly publicized criticisms of evolution have occurred ever since Darwin’s time. For this reason, it is important that, during the course of your study of biology, you address the issue squarely: Just what is the evidence for evolution?