As JURASSIC WORLD roars in theaters, scientists again debate whether dinosaurs were killed by an asteroid or by volcanos 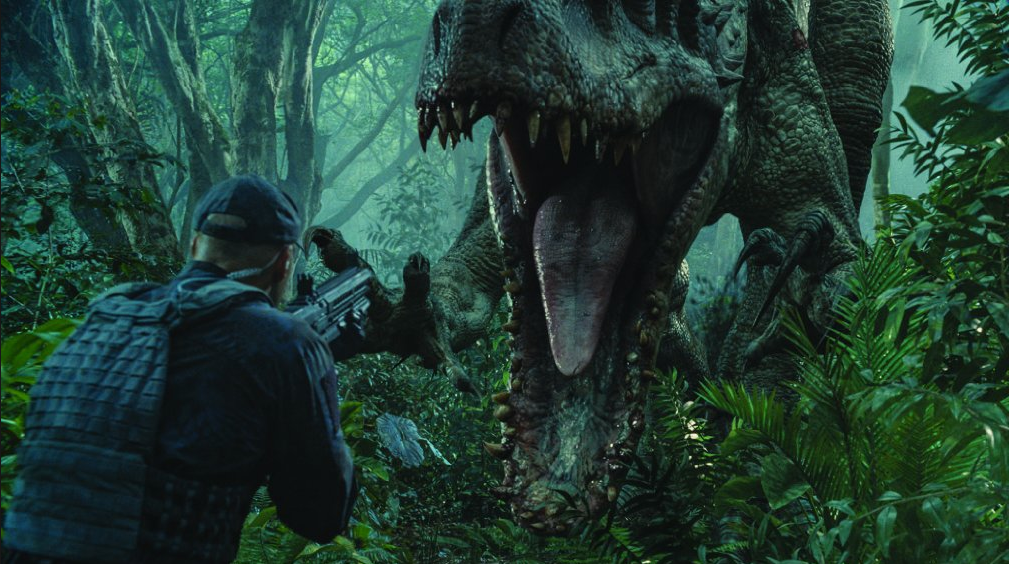 The current film hit Jurassic World, like the three dinosaur thrillers before it, involves killing a lot of dinosaurs running amuck on an isolated island. Ignoring Lewis Carroll’s warning to “shun the frumious Bandersnatch,” scientists on the island have genetically engineered dinosaur DNA to create really scary critters, who of course get loose and begin eating people. How do the folk in these movies kill the dinosaurs? They shoot them, blow them up, electrocute them – almost anything a kid would dream up playing with toy dinosaurs on the kitchen floor.

Oddly enough, the key dramatic question driving the action in all of these films – how to kill a dinosaur – has become a very lively topic of argument among scientists in the last few months. There was a day – last year, say – when we thought we knew how all the dinosaurs died. Killed by a meteor impact, right? Now… maybe not. Another candidate for Dino Killer, long discounted, has returned to the list of possibilities. How it has done so is a story too good not to explore, so lets have a look:

The event we are talking about – the extinction of the dinosaurs – took place at the end of the Cretaceous, 65 million years ago. Not only did all dinosaurs disappear, but so did flying reptiles (pterosaurs)but not birds, swimming reptiles (ichyosaurs and plesiosaurs) but not fish, all ammonites (a very diverse group of marine animals), all marine forams (the White Cliffs of Dover are made of foram shells)   — in fact, everything in the sea with a shell became extinct, and everything large on land except plants. Whatever killed the dinosaurs did a very thorough job of killing.

Needless-to-say, people have wondered what happened. When you discount the “crazy” theories (dinosaurs were hunted to extinction by cavemen, mammals ate all the dinosaur eggs, a dino virus did them in, etc), there are only three theories in serious contention.

Failure to Adapt. During the Cretaceous period, earth’s climate gradually grew cooler. This theory proposes that dinosaurs were unable to adapt to a cooler earth, and gradually died out. The problem with the theory is that the change in the fossil record is far more abrupt than the climate change, a few hundred thousand years at most, and probably far less. If you look at a specific place – say the Hell Creek dinosaur bed in Alberta – there is no change in dinosaur diversity right up to the very end of the Cretaceous – then no dinosaurs at all. So this theory is rejected by the data. While a drastic change in the environment surely has something to do with the dinosaur death, that change was not gradual.

Death from Space. If you look at old rock, there is a clay layer that formed at the end of the Cretaceous. In 1978 Paleontologist Walter Alverez set out to look carefully at this band to see if the tiny sea shells of this clay were of uniform age – a technical point, but of interest to him. To date the calcium carbonate of the shells, he needed a constant reference point. He chose the element iridium, common in meteorites (500 parts per billion) but very rare in the earth’s crust (only 0.03 parts per billion). Everything went pretty much as expected until Alverez’s measurements reached a thin, dark line in the center of the clay layer: the iridium in this narrow band of rock was 450 parts per million! Puzzled, he took this alarming data to his father Luis, a Nobel Prize winner and so no slouch at sorting out scientific puzzles. The Alverez brothers looked at other rock samples. Wherever on earth the samples came from, rocks sampled from the boundary layer marking the end of the Cretaceous contained iridium, lots of it, while no other rocks did. The boundary layer rock also contained shocked quartz grains of a sort found only at nuclear test sites and meteor craters like the one below. 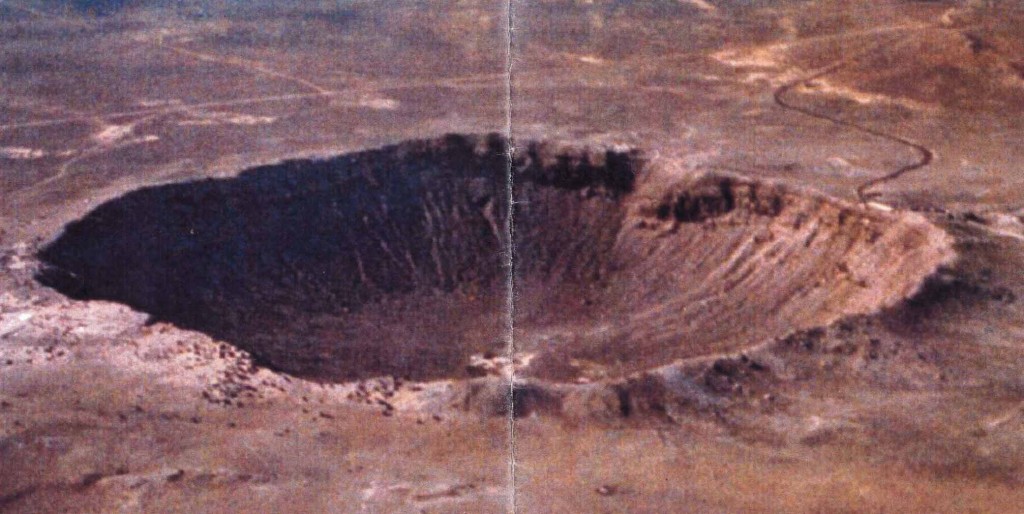 Their conclusion: the iridium found in the boundary layer is extraterrestrial, and came from the only place in our solar system where there is a lot of iridium – a meteor. To get enough iridium, they calculated the meteor that hit the earth would have to have been some 10 km in diameter, so big that it would have created a 185 mile diameter crater! In 1990 a candidate crater was 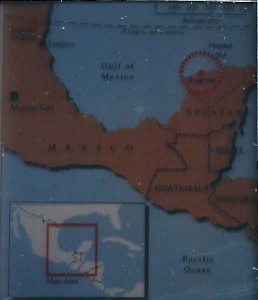 found, at Chicxulub (“dragon’s tail”), off the north coast of Yucatan, Mexico. The crater was big enough (110+ miles in diameter) and the right age (just 32,000 years before the end of the Cretaceous). A blast of the size such an impact would have created could easily have had enormous environmental impact all over the world, enough to kill dinosaurs. And the impact happened just when all the dinosaurs disappeared. For the last 35 years, this asteroid theory of dinosaur extinction has been the winner, widely accepted as proven.

Volcanoes. There has however, in the background, been another theory that refuses to go away. To get our hands around it, it is useful to step back a minute. There have been five mass extinction events in the history of life on earth. The most extensive 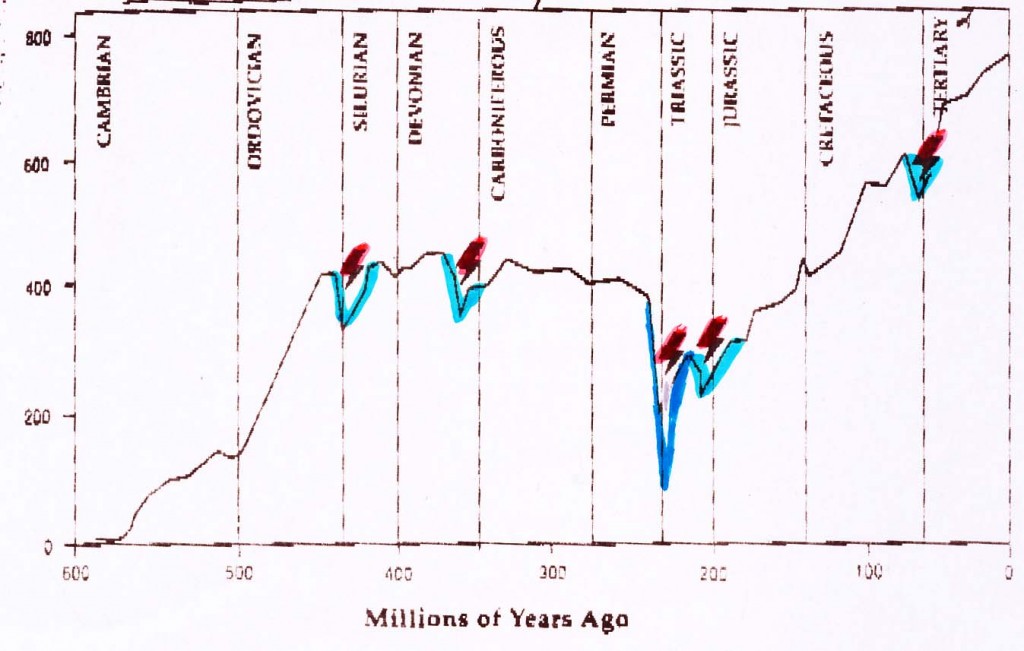 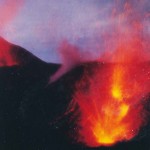 greatest volcanic outbursts in earth’s history, they covered Siberia with a blanket of lava miles thick bigger than the area of Western Europe, and much of the floor of the North Atlantic. Might these fiery events have led to mass extinctions? To find out, geochemists measure the age of the old lava, using the slow but steady radioactive decay of uranium-238 to lead-206 in tiny zircon crystals created by the eruptions. New, very precise measurements of the volcanic rocks date them bang-on with the mass extinctions: the Siberian lava is 252.3 million years old, and the Permian extinction took place 251.9 years ago. 50 million years later, lava gushed from the seams of the supercontinent Pangaea as it broke apart, creating the Palisades across from New York City – whose age has recently been measured as matching the date of the mass extinction at the end of the Triassic.

So what has this got to do with the dinosaurs? You got it – there was another massive volcanic event that occurred in west India 65 million years ago at the end of the Cretaceous – the same time the dinosaurs went extinct. Called the Deccan (Sanskrit for Southern) Traps (Dutch for staircase), the lava flows cover 2 million square kilometers! As you can see in the photo, the layers of lava from successive eruptions do indeed look like a staircase. Until recently, it was thought that the volcanic activity occurred over a protracted 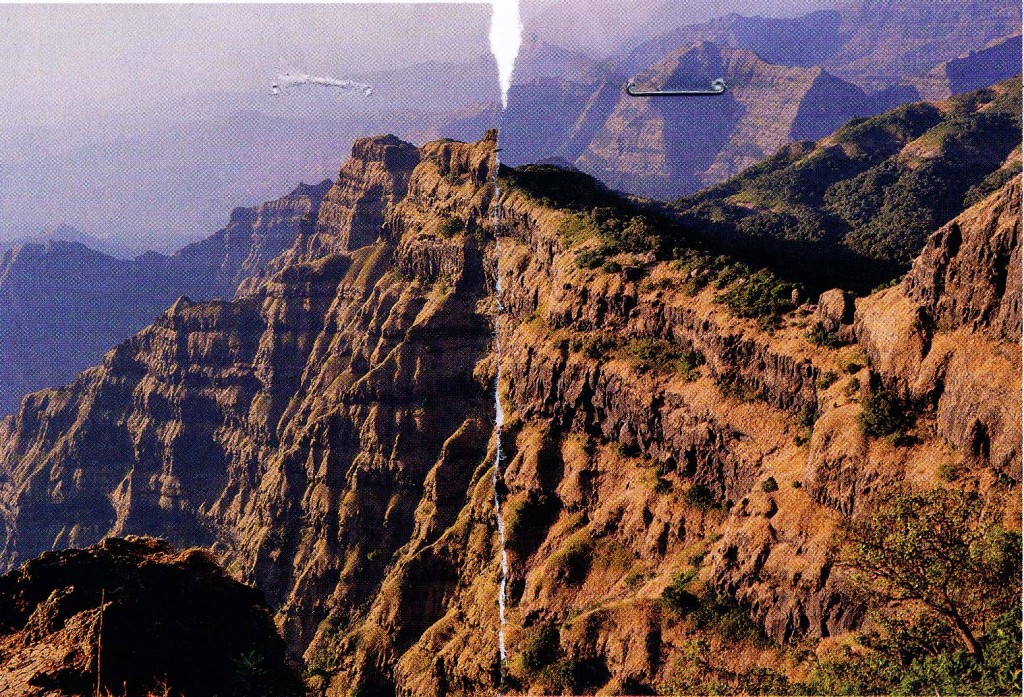 period of half a million years, way too slow a change to have removed the dinosaurs. New more accurate lava dating, announced only last month, changes that conclusion. It now appears that most of the lava erupted in less than a million years. When? As you can see in the graph below, just before 65 million years ago. Just when the dinosaurs made their exit. A “smoking gun” indeed. 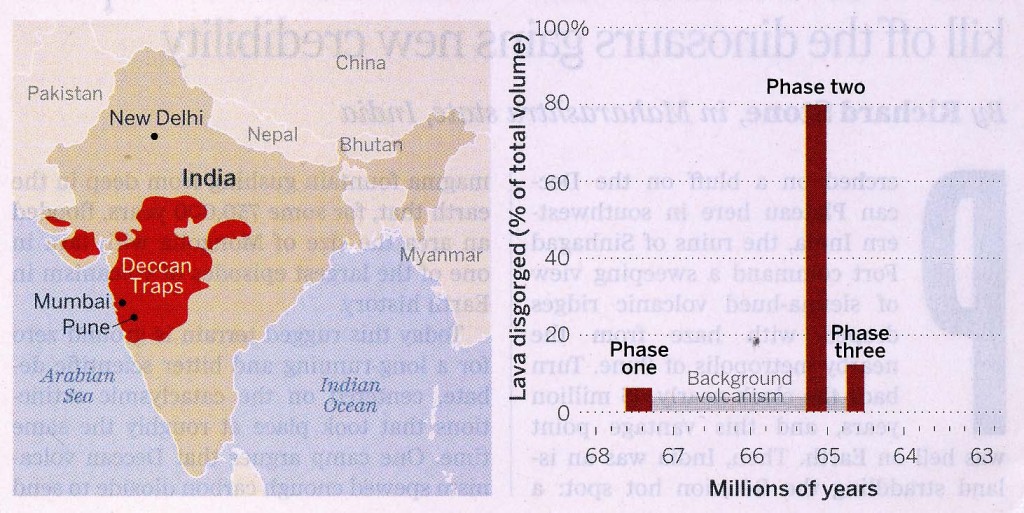 So, two rival theories. The volcano theory has the advantage that it can be put to work explaining three mass extinctions. Could asteroid impacts also explain other mass extinctions? Two candidates come quickly to mind: the 62-mile-wide Manicouagan crater in Quebec should have been big enough to wipe out a third of life on earth, but when dated had no discernable effect on biodiversity. Nor did the huge meteor that created a 90 km crater under Chesapeake Bay 35 million years ago. Other than at the end of the Cretaceous, there are no asteroids at mass-extinction boundaries. One point for the volcano guys.

The dinosaurs were not the only groups to go extinct at the end of the Cretaceous. Everything in the sea with a shell also disappeared. Its easy to explain this with volcanic eruptions – injection of massive amounts of sulfur into earth’s atmosphere would lead to world-wide acid rain (sulfuric acid, no less!) and acidification of the world’s oceans. Calcium carbonate dissolves in acidic water. There go the shells of ammonites and forams. Can asteroid impact match this? Not well. In a bit of a stretch, it is conceivable that the intense heat of the shock wave could have caused O2 and N2 to combine to form nitric acid, acidifying the oceans that way. A bit far-fetched. On balance, another point for the volcano guys.

So who wins? There is no way to choose, really. Both asteroid impact and volcanic eruption events occurred at the time the dinosaurs disappeared. Imagine someone shot at the same time in head and heart by two assailants. Who killed him? Either bullet would do the job. You pays your money, you takes your choice.