If the Paris accords fail, GeoEngineering may offer our last best hope for beating global warming… but there is much we do not yet know.

Atmospheric carbon dioxide levels are at a 2 million year high, with most of the rise since 1900. In response, global temperatures are rising rapidly. If nothing is done to reverse this trend, earth’s oceans are going to rise as polar ice melts and flood coastal cities like Miami. Drought and weather extremes will become commonplace. 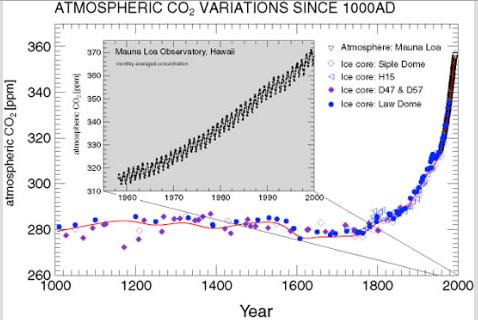 The amount of CO2 in earth’s atmosphere, estimated in many different ways, shows little increase for the first 800 of the last thousand years. Over the last 200 years, however, levels have increased dramatically. Precise measurement at Mauna Loa Observatory, Hawaii indicate the steady rise continues unabalted today.

What should we do to reverse this trend? There are only two feasible solutions to global warming induced by the carbon dioxide released by humans into earth’s atmosphere. One is to reduce the amount of CO2 humans release. While attempts are being made to reduce car and power plant emissions, no serious impact has been achieved. Meeting in Paris last week, the nations of the world agreed to attempt better control of carbon emissions, setting long range targets focused on reducing the burning of coal and other fossil fuels. The goal: to reduce carbon emissions to keep the rise in global temperature  “well below 2 degrees C.”  No one knows if these promised efforts will succeed in meeting that ambitious goal, but the attempt is essential.

Discouragingly, even if the goal is met, the Paris target gets us only half-way there… which takes us to the other potential solution to global warming: GeoEngineering.  GeoEngineering is a  deliberate intervention to alter earth’s climate. Among a host of proposals, many impractical, two approaches are being evaluated seriously. One removes CO2 from the atmosphere by fertilizing earth’s oceans to induce massive photosynthesis, while the other injects sulfate aerosol into the atmosphere to reflects sunlight away.

Ocean Fertilization.  Removing the excess CO2 from earth’s  atmosphere is easier said than done. Attempts to store (sequester) atmospheric  CO2 in deep wells do not seem practical on a large scale. Where else might one put it? The most promising answer, oddly enough, is: back where it came from.

In 1988 Ocean ecologist John Martin famously said, “Give me half a tanker of iron and I’ll give you an ice age.” He was pointing out that earth’s oceans are rich in marine algae, their growth limited primarily by lack of iron (Fe). Adding iron to the upper ocean could trigger an algal “bloom,” its intense photosynthesis sequestering massive amounts of CO2 in organic matter that would then fall to the ocean’s bottom where it could no longer react with earth’s atmosphere. In essence, fertilizing the oceans with Fe would reverse man-made global warming, returning CO2 to the state from which the burning of fossil fuels had released it.

In the laboratory, experiments had suggested that every pound of iron added to ocean water could remove as much as 100,000 pounds of carbon from the air, so Martin’s quip was taken seriously. However, while exciting, Martin’s iron dump hypothesis is not an easy idea to test. In a series of small-scale tests of the idea, adding iron to sea waters always succeeded in drawing carbon from the atmosphere into the oceans (Figure 38.7) , although not as efficiently as in the laboratory. 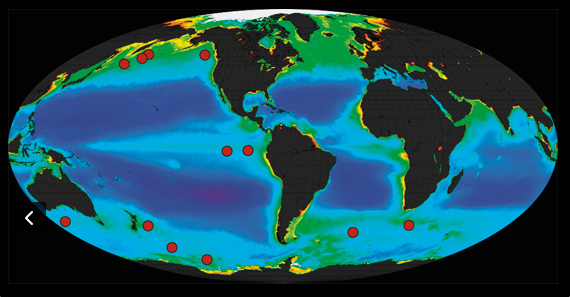 12 small-scale ocean experiments have been carried out since 1988 (red dots on the map).

However, two potential problems were revealed by these early experiments: 1. Tiny xooplankton that live on the ocean’s surface eat much of the bloom of algae as soon as it forms, returning the CO2 back to the atmosphere; 2. Surface bacteria consume dead algae, and in doing so remove life-giving oxygen from the water. These two processes both assume the algae do not sink beneath the ocean surface, as Martin had claimed they would. Do they? In these studies, ocean currents have confused our ability to assess this critical question, but researchers in 2012 found a solution. In the Southern Ocean near Antarctica, currents swirl, forming stable eddies within which the necessary measurements could be made. If Martin is right, adding Fe to the ocean waters should produce an algal bloom within the eddy that would then fall downward into the deep ocean. 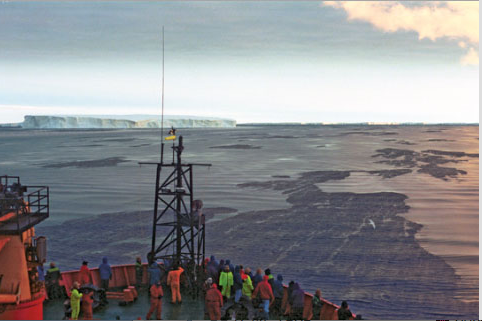 To test this prediction, a businessman-turned-eco-warrior named Russ George added 100 tons of iron sulfate from a fishing boat into the ocean eddy, and then for a month measured organic carbon and chlorophyll in a 100 meters deep column of ocean water. 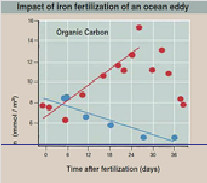 You can see in the graph what happened in the graph: a week after fertilization an algal bloom explodes within the eddy waters, reflected in rapidly rising levels of organic carbon. Another week later, the bloom reaches its maximum size, and then begins to fall as the algal mass sinks to the ocean bottom. Martin’s iron dump hypothesis is confirmed.

While this result is promising, ocean fertilization remains a highly controversial approach. Legal and ethical issues arise fom the fact that no one country owns the earth’s oceans (for example, George’s experiment, done without obtaining any international approvals, was greeted with outrage by many countries). The key problem is that the potential ecological impact of extensive and prolonged Fe fertilization is poorly characterized, and may be significant even if the Fe-induced algal blooms sink below 1000 m. It seems likely, for example, that Fe fertilization will promote growth of the bacteria responsible for nitrification in the oceans, and N2O is a much more powerful greenhouse gas than CO2. Simply said, there is a great deal we don’t know, making iron fertilization of earth’s oceans ecological risky until these matters are more clearly understood.

Sunlight Reflection.  A second geoengineering approach makes no attempt to reduce CO2 levels in the atmosphere. Instead, it turns the upper stratosphere into a mirror, reflecting the sun’s rays back into space. Despite rising CO2 levels, the world’s climate does not warm because light is not being absorbed by the CO2 molecules.

How to convert the stratosphere into such a mirror? Researchers propose to inject sulfate particles high up into the air; suspended in an aerosol, these particles act like countless tiny mirrors. Seen from space, the earth would look bright with reflected light.

Could this be done? Almost certainly. A few hundred thousand tons of aerosol would need to be added to the atmosphere annually, not a simple task but doable.

Would it work? Much of the support for the approach comes from computer climate-prediction models which have a record of uncertainty. The only way to know for sure will be to try it.

Like iron fertilization of earth’s oceans, using sulfate aerosols to reflect sunlight from earth’s atmosphere is a controversial approach because of the possibility of profound unintended ecological and climatic consequences. A recent event provides a picture of the sorts of things that might happen: On June 15, 1991 the top blew off Mount Pinjatubo in the Philippines, delivering 20 million tons of sulfur dioxide to the stratosphere. 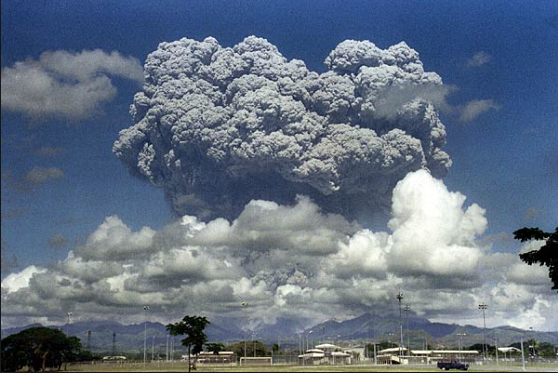 As would be expected, earth experienced a general global cooling (about 0.9 degrees F) due to this stratospheric reflective veil of sulfate, but some regions experienced significant warming instead; a large portion of the earth experienced dought conditions in 1992, in patterns difficult to predict. The influence on agricultural photosynthesis was profound but patchy in ways not well understood.

There is a second problem with this approach, subtle but profound. It does nothing to slow or reverse the steady increase of CO2 in earth’s atmosphere. The ocean acidification that results from CO2 dissolving into seawater (CO2 + H2O = carbonic acid) continues unabated, with ecological impacts at least as unpredictable as those of ocean fertilization. Again, there is simply a great deal we do not know.  And there is this: increasing levels of atmospheric CO2 in the future, unreduced by this approach, will make abandoning the program of sulfate aerosol injection less and less possible as years go by, lest we cook the earth.

On balance, then: No clear solution provided by GeoEngineering, with what we now know.  Clearly, time to start learning more.