Since the United States and Russia began large-scale bioweapons programs after World War II, the possibility of germ warfarewar using infectious disease as a weapon of mass destructionhas been a nightmare growing ever closer to reality.

In the summer of 1968 the nightmare achieved chilling closeness. Near a small atoll in the South Pacific a thousand miles southwest of Hawaii, American forces were in the midst of highly secret tests of germ warfare weapons. At sunset one quiet July day an armada of ships was positioned in the ocean waters around Johnston Atoll, upwind from a line of barges with hundreds of cages containing Rhesus monkeys on their decks (figure 4). A lone Marine Phantom jet flew in low past the island, then shot off over the horizon. As it passed the island, a pod under one wing released a powder into the air, a long tendril of smoke that soon disappeared. Only a small amount of powder was released in the few minutes the plane shot across the several miles of this line source laydown, and the wind soon carried the tiny particles out to sea. A thin, long curtain of powder swept past first one barge loaded with monkeys, then, at increasing intervals, another and another, finally passing the most distant barge nearly fifty miles away. Afterwards, the monkeys were taken back to Johnston Atoll. Over the next few days half of them died. Even the monkeys positioned fifty miles away from the laydown were not protected by distance. Anyone watching the test that day knew beyond any doubt that bioweapons really work, that germ warfare could be used to kill millions of people. The same Phantom jet passing down the Hudson River could kill a large fraction of the people in Manhattan. 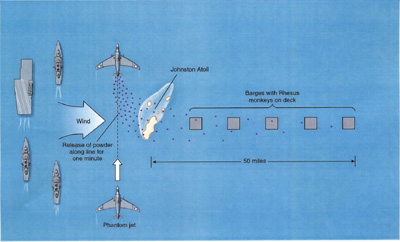 Figure 4
Proving that bioweapons work. In this 1968 weapons field test near Johnston Atoll in the South Pacific, the bioweapon agent was released as a fine powder by a jet, and carried by the wind past a series of barges. Rhesus monkeys on the barges were severely affected for up to 50 miles.

The nature of the bioweapon tested at Johnston Atoll has never been confirmed by the U.S. military, but it seems likely to have been a weaponized form of anthrax. In 1969, one year after the secret Johnston Atoll tests, President Nixon renounced the use of bioweapons by the United States, and ordered all American bioweapons destroyed and American research into germ warfare halted. In 1972 the United States signed the Biological and Toxin Weapons Convention, along with over 140 other countries. The convention called for the destruction of all stocks of offensive bioweapons, and termination of all research on their development.

The Russian Bioweapons Program Does Not

Russia also signed the treaty, but interviews with defecting senior officials of its bioweapons program now reveal that Russia viewed Americas retreat from bioweapons as an opportunity for them to gain a military advantage. The bioweapons treaty had no inspection provisions (It has been speculated that American pharmaceutical industries feared the loss of trade secrets), so no one outside of Russia knew at the time that, instead of stopping, the Russian military massively expanded their bioweapons program. Their focus was on anthrax, bubonic plague, and a lethal fever of horses called glanders caused by Pseudomonas mallei recently renamed Burkholderia mallei). Nor was the bioweapons program limited to research. At the height of the Russian bioweapons programs, the Soviet military was manufacturing more than a thousand metric tons of each of these agents each year (table 2).

The cessation of American vaccination for smallpox in 1980 (the year after the disease was officially certified as eradicated by the World Health Organization) was viewed by the Russians as another strategic opportunity, and they began a program to weaponize the variola virusto modify the virus so that particles of it can be efficiently disseminated in tiny aerosol droplets. They then set out to produce the weaponized smallpox virus on a very large scale. Ken Alibekov, former first deputy chief of research (that is, second in command) for the Soviet bioweapons program, who since defected to the United States, reports that by 1989 over 20 metric tons of weaponized smallpox had been produced, and tons of it loaded into missiles to be dispersed in bomblets.

With the economic meltdown of the Soviet Union in the 1990s, the Russian bioweapons program ground to a halt. The bioweapons are said to have been destroyed, lest the treaty violation be proven. Substantial numbers of the scientists and technicians working in the large Soviet bioweapons programs found themselves without salary. Iran, Iraq, Syria, and North Korea actively recruited some of these workers (most apparently resisted the temptation to emigrate), and with the lax security of Russian research centers in recent years no one knows what knowledge or bioweapons samples might have found their way to countries sponsoring terrorism.

In the classical myth, Pandoras box, once opened, is not easily closed. That is the nightmare of bioterrorism we facewe may never be rid of the weapons we have created. Weaponized anthrax, smallpox, and other lethal bioweapons have not been destroyed (samples preserved in government laboratories in the United States and Russia may have escaped their confinement. We cannot rule out the possibility that rogue states may have acquired one or more of the bioweapons, and might at any time provide them to others. The largely ineffective anthrax attack launched through the mails against American news organizations and the United States Government in September, 2001 suggests the reality of the danger.

While America and Russia have ceased their bioweapons programs, the weaponized agents and the knowledge of how to prepare and use them may have escaped control.