A Closer Look at Anthrax

Anthrax is a disease of cattle, goats, and sheep caused by a bacterium, Bacillus anthracis. It is rare for humans to be infected. Most infections that do occur are localized to small cuts in the skin whose edges turn black (hence the name anthracis, after anthracite coal). The disease is deadly for humans because B. anthracis produces lethal toxins. Like other members of the Bacillus genus, B. anthracis produces endospores (figure 5). An endospore is a tiny dormant cell, a tough package of DNA wrapped in protein that a bacterium makes when times are tough, sort of a seed that can persist for centuries, until times improve and the spore germinates to reestablish the anthrax population. The problem arises because humans can inhale these spores. If the strain is a virulent one (most are) and a person inhales a few thousand spores, the spores may establish themselves in that persons lungs, producing an infection that is often fatal. This form of infection, pulmonary anthrax, does not occur oftenthe last fatal case of pulmonary anthrax in the United States until the attack on America in 2001 was in 1976. 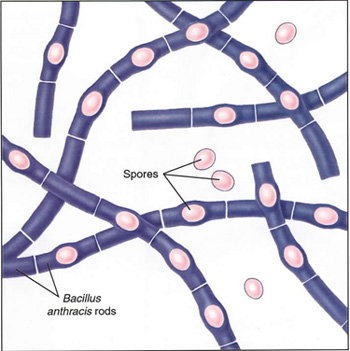 Figure 5
Anthrax spores. Bacillus anthracis, like many other members of this genus of bacteria, forms tiny spores that can travel for considerable distances in the air. Breathing of these spores can lead to pulmonary anthrax.

Evolution has designed the anthrax spore as an efficient killing machine. The surface of the lungs are patrolled by scavenger cells called macrophages that engulf foreign matter and alert the immune system to infections. When a macrophage encounters an anthrax spore, it ingests it. Once inside the macrophage cell, the spore germinates into an anthrax bacterium, which starts to grow and divide. Soon a cluster of anthrax bacteria burst out of the macrophage into the bloodstream, and begin reproducing explosively.

Carbon dioxide in the blood is the trigger that begins the killing of the infected individual. The carbon dioxide activates the anthraxs toxin regulation control, a gene called AtxA. This gene in turn switches on three other genes, an intricate three-part mechanism to kill animal cells. The first of these three genes produces a protein called protective antigen (named before its role was understood) that is designed to dock onto the receptor proteins that stud the surface of macrophages (figure 6). Proteins made by the other two genes stick onto the docked protective antigen protein like sticky balloons. Successful docking then triggers a process called receptor-mediated endocytosis that introduces the attack complex into the macrophage cell. 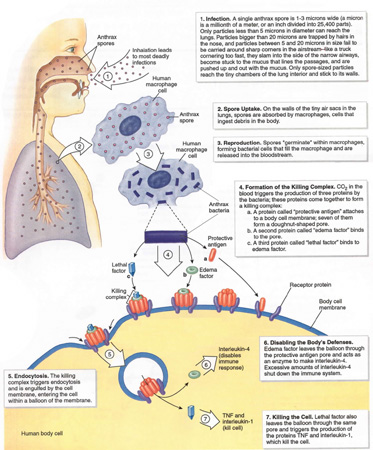 Now the protein made by the second gene, called edema factor, comes into play. It is an enzyme, and it begins to busily produce a molecule used by cells for internal communication. It produces so much of the signal that the immune system cells which should detect and remove the infected macrophage become confused and fail to do so. In effect, the excessive amount of signal disables the bodys first line of defense against infection.

Now the stage is set for the protein made by the third gene, called lethal factor. This powerful toxin is also an enzyme. It causes the macrophages to start madly producing two powerful agents that provoke local inflammation. The two agents, tumor necrosis factor (TNF-alpha) and interleukin-1-beta, are natural parts of the immune response, but an excess of them produces quick death.

Like most Gram positive bacterial infections, anthrax can be treated effectively with antibiotics if administered early in the infection. Because of worries that an anthrax infection may involve weaponized anthrax that has been made resistant to penicillin, other antibiotics that works differently, ciprofloxacin (CIPRO), iprofloxacin, and doxycycline are the drugs of choice in treating anthrax infections.

An effective vaccine against anthrax was first produced by Louis Pasteur in 1880 using heat-inactivated bacteria. Todays vaccines are a complex broth of proteins filtered from a nonthreatening strain of anthrax. Shots must be repeated for several months to gain full protection. New alternative vaccines based on a genetically engineered version of a single key antigen are going into clinical trials, and are anticipated to produce 95% protection with a single shot.

Anthrax Has Been Used As a Bioweapon

Because it is deadly, noncontagious, and dispersed by spores, anthrax has always been considered a good candidate for a bioweapon (table 3). Late in 2001, this possibility became a reality. Letters containing anthrax spores were sent to several news reporters and two United States Senators. Five people died of inhalational anthrax as a result of exposure to these spores.

Table 3 Anthrax through the ages 1500 B.C. — Fifth Egyptian plague, affecting livestock. 1600s — “Black Bane,” thought to be anthrax, kills 60,000 cattle in Europe. 1876 — Robert Koch confirms bacterial origin of anthrax. 1880 — First successful immunization of livestock against anthrax by Louis Pasteur. 1915 — German agents acting in the United States believed to have injected horses, mules, and cattle with anthrax on their way to Europe in World War I. 1937 — Japan starts biological warfare program in Manchuria, including tests involving anthrax. 1942 — England experiments with anthrax at Gruinard Island off the coast of Scotland. The island has only recently been decontaminated. 1943 — United States begins developing anthrax bioweapons. 1950s and ’60s — U.S. biological weapons program continues after World War II at Fort Detrick, Maryland. 1968 — Anthrax bioweapon reported to have been successfully tested at Johnston Atoll in Pacific. 1969 — President Richard Nixon ends United StatesÕ biological weapons program. 1972 — International convention outlaws development or stockpiling of biological weapons. Russia signs the convention, then secretly undertakes massive expansion of its bioweapons program, making tons of smallpox and anthrax. 1979 — Weaponized anthrax aerosol released accidently at a Russian military facility, killing about 68 people. 1990-93 — The terrorist group, Aum Shinrikyo, releases anthrax from rooftops in Tokyo, but no one is injured. 1995 — Iraq admits it produced 8,500 liters of concentrated anthrax as part of a bioweapons program. 2001 — Letters containing milled anthrax are mailed to U.S. news organizations and Congress in the first use of bioweapons by terrorists.

A major investigation has been launched to identify the terrorist who sent the Anthrax Letters. Examination of the spores in the letters reveals that a great deal of sophisticated technology was used in producing them, the sort of technology found in a government bioweapons program:

1. A deadly strain. Many naturally occurring strains of anthrax are not virulent, and there is great variation in the potency of the strains that are. More than 90 distinct strains (subspecies) of anthrax are known worldwide. Examination of the spores in the Anthrax Letters revealed them to be of a particularly virulent strain called the Ames strain, developed by the U.S. bioweapons program.

2. Weaponized spores. The spores in the anthrax letters were particularly deadly because the particles had been processed to improve their dispersion through air. A dense solution of the spores was first converted to a powder by freeze-drying the spore solutionbasically, the solution was frozen solid, then placed in a vacuum so that the water sublimated off. After freeze drying had removed the water, the solid block of spores was stable and dry at room temperature.

Spore particles in the anthrax letters were of a uniform 5 micron size, ideal for human inhalation (larger particles would be trapped by the hairs and mucus-lined walls of the nasal passage). To make 5 micron particles, it would have been necessary to mill the solid block of spores to obtain particles of just the right size. This could not have been done simply by grinding the freeze-dried block of spores, as rough grinding damages the spores being released from the block. In bioweapons laboratories, spores are released from the surface of the block by gentle milling, lubricated by clays such as bentonite, with dislodged 5 micron spores collected on a moving stream of air. Traces of lubricant were in the Anthrax Letters.

The surfaces of natural spore particles have electrostatic charges which cause individual spore particles to clump together. The spores in the Anthrax Letters did not clump. Their electrostatic charges had been neutralized. In bioweapons programs this is done, in effect, by adding soap. Detergent molecules bind to the surface charges, neutralizing them. The spores in the Anthrax Letters bear traces of specially-designed detergent additives developed by the U.S. bioweapons program.

3. No antibiotic resistance. To be maximally effective as a bioweapon, weaponized strains of anthrax are often genetically modified to be resistant to antibiotics. This was not true of the version of the Ames strain used to prepare the spores in the Anthrax Letters.

4. Delivering over a wide area. Military bioweapons programs have focused on aerosol sprays that deliver the spores over wide areas in cluster bombs, a very effective approach so long as the heat from the explosion of the bomblets does not inactivate the spores (tiny plastic spheres are mixed with the dry spores to absorb the heat). The terrorist who sent the Anthrax Letters chose a far simpler delivery system, the mail.

Because of the highly technological processing they had undergone, and its detailed similarity to procedures developed by the U.S. bioweapons program, it seems likely that the source of the spores used in the Anthrax Letters was one of the U.S. bioweapons laboratories.