The Nightmare of Gene-Modified Pathogens

The Russian bioweapons programs were not limited to producing massive amounts of weaponized human pathogens. During the 1980s, scientists at their Biopreparat germ warfare laboratories began experimenting with a novel approach to biological weapons, one that involved using genetic engineering. The goal was to insert genes into infectious agents capable of turning the human body against itself.

When the myelin gene fragments were inserted into Legionella bacteria (the cause of Legionnaires disease, a troublesome but usually nonlethal pneumonia) and the GM Legionella allowed to infect guinea pigs, the animals at first exhibited a mild pneumonia, from which they soon recovered. Days after all signs of the infection were gone, the animals began to exhibit symptoms of brain damage. Paralysis and death followed. Mortality was nearly 100%.

Although the Russians never produced a GM myelin peptide bioweapon, the importance of this result cannot be overstated. Clearly, GM bioweapons would work.

The magnitude of the threat posed by GM modified bioweapons only became evident in February of 2001, when Australian scientists reported some unanticipated results of what was intended to be a benign experiment. The Australians were involved in a pest control project, trying to find a way to control excessively large mouse populations. Their experimental goal was to render the female mice infertile by triggering an autoimmune response against their own eggs.

They used as a vector the mousepox virus, a relative of human smallpox. They inserted into the mousepox DNA a gene from mice that controls production of the molecule interleukin-4. Interleukin-4 is a powerful stimulator of the immune response, and the researchers hoped it might so stimulate the females immune sensitivity that the female mouse would reject its own eggs as foreign.

Thats not what happened. Instead, all the infected mice died.

Something else happened, too, something unexpected and very troublesome. The control mice, which had been vaccinated against mousepox and which should have been immune to the infection, also died. Apparently the excess interleukin-4 had thrown the mices immune response totally out of whack, so that immunity in these mice no longer works (figure 9). Their bodies after infection with the GM interleukin-4 mousepox had no defense against the virusthey had totally lost their immunity. 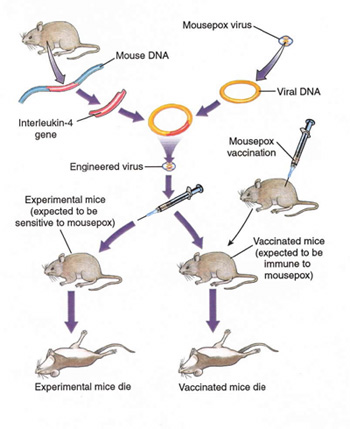 Figure 9
The unintended invention of a terrifying GM pathogen. Insertion of the interleukin-4 gene into a pathogen disables immune defenses, rendering vaccines useless.

The problem that this result presents is that it suggests that smallpox or influenza genetically modified to contain the human interleukin-4 gene would defeat any vaccine! No government would create such a bioweapon, as there could be no way to defend their own troops and people against it. To a terrorist without such scruples, it might seem the ideal bioweapon. The Australians published their result in the hope that governments around the world would see the need to regulate research into the genetic engineering of pathogens. Once produced, this sort of bioweapon might someday be used, and would lead to an epidemic beyond control.

Genetically modified bioweapons, were they ever to be produced, offer terrifying possibilities.