3. Evidence for evolution can be found in other fields of biology.

Much of the power of the theory of evolution is its ability to provide a sensible framework for understanding the diversity of life. Many observations from a wide variety of fields of biology simply cannot be understood in any meaningful way except as a result of evolution.

As vertebrates evolved, the same bones were sometimes put to different uses. Yet the bones are still seen, their presence betraying their evolutionary past. For example, the forelimbs of vertebrates are all homologous structures, that is, structures with different appearances and functions that all derived from the same body part in a common ancestor. You can see in figure 22.15 how the bones of the forelimb have been modified in different ways for different verterbates. Why should these very different structures be composed of the same bones? If evolution had not occurred, this would indeed be a riddle. But when we consider that all of these animals are descended from a common ancestor, it is easy to understand that natural selection has modified the same initial starting blocks to serve very different purposes.

Some of the strongest anatomical evidence supporting evolution comes from comparisons of how organisms develop. In many cases, the evolutionary history of an organism can be seen to unfold during its development, with the embryo exhibiting characteristics of the embryos of its ancestors (figure 22.16). For example, early in their development, human embryos possess gill slits, like a fish; at a later stage, every human embryo has a long bony tail, the vestige of which we carry to adulthood as the coccyx at the end of our spine. Human fetuses even possess a fine fur (called lanugo) during the fifth month of development. These relict developmental forms suggest strongly that our development has evolved, with new instructions layered on top of old ones. 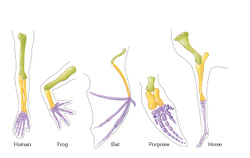 Homology among the bones of the forelimb. Although these structures show considerable differences in form and function, the same basic bones are present in the forelimbs of humans, cats, bats, porpoises, and horses. 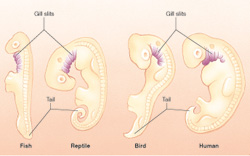 Our embryos show our evolutionary history. The embryos of various groups of vertebrate animals show the features they all share early in development, such as gill slits (in purple) and a tail.