I can remember when I was a boy scout being instructed by my scout master that if I ever got lost in the woods without a compass, I should look to see what side of a tree had moss growing on it (the idea being, I suppose, that in the Northern Hemisphere the north side of a tree get the least sun, and that mosses favor this shade).  That turns out to be a real lousy way to tell direction. What I should have been told, I learned last week, was to look for a grazing cow.

This particular story has an interesting beginning.  Professor Sabine Begall of the University of Duisburg in Germany had been studying naked mole rats  blind hairless animals no bigger than a baby’s fist that live underground as members of large family groups. Mole rats show a high degree of cooperative behavior, and are the subject of much research by behavioral biologists.

One observation has always been very puzzling: mole rats almost always build their nests on the south side of their tunnels.  Now think about that.  The tunnel is underground, and the mole rats are blind  so how do they know what direction is south?

Professor Begall set out to look into this.  She first asked a simple question: Do other mammals also have the ability to perceive magnetic fields, or is this a special trick of mole rats?   As a way of getting a handle on this, she took a brilliantly simple approach, asking the question in quite a different way.  Using Google Earth, a web site that stitches together high-resolution satellite photographs to produce an up-close look at the earth’s surface, Begall looked for camp sites, and when she found them she examined the sites to see if the tents were oriented haphazardly, or tended to be oriented in a particular direction.  In essence, what she was asking was whether humans are able to sense the earth’s magnetic field, like mole rats seem to do.

The problem was, you couldn’t make out the tents clearly enough to be sure of their direction. A lot of them were round, and many of the others were the same color as their surroundings and so hard to see.

But as Begall looked at the pictures, she noticed that it WAS possible to clearly see cattle grazing in nearby fields.  What about cows, she asked herself. Do they orient themselves in any particular direction?  She studied images of thousands of cattle, grazing in different places at different times of day so that effects of sun warming and wind chill didn’t confuse the results. 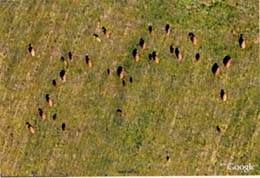 So, do they orient themselves to the earth’s magnetic field?  Yes.

Overall, grazing cattle do align themselves in a north-south direction. Somehow they seem to know which way north is.  Are they somehow sensing the earth’s magnetic field?  It seems so.  The earth’s magnetic pole is actually located quite a ways from the geographic north pole at the top of earth’s sphere, and at high latitudes a cow pointing at one can be clearly distinguished from a cow pointing at the other.  Begall found that cows at high latitudes point to the magnetic pole.

Are the cows actually looking north?  Its difficult to tell from Google Earth images  one end of a cow looks much like the other.  To sort this out, Begall used data collected by colleagues in the Czech Republic on the grazing behavior of red deer (the large antlers are clearly visible at the head end of the animals).  Czech deer look north.

How in the world do mole rats and cows detect the earth’s magnetic field?  Perhaps they do as birds do.  Many migrating birds have the ability to detect the earth’s magnetic field, and to orient themselves with respect to it.  In a closed indoor cage they will attempt to move in the direction of their migration, even though there are no visible external cues.  However, if you place a powerful magnet near the cage, you can alter the direction is which the birds attempt to move.  Researchers have found tiny amounts of magnetite, a magnetized iron ore, in the heads of some birds, but have not been able to identify any sensory receptor using the ore.  Current investigations searching for the magnetic receptor focus on the eye.  In mole rats there are suggestions of tiny particles of magnetite in the cornea of their rudimentary eyes.  But until an actual magnetic receptor is found that can send signals to the brain, the matter remains a mystery to which no human knows the answer.  But cows do.