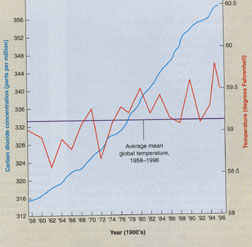 Prospects for the world’s future encountered a serious setback last weekend when efforts by the UN to forge an international global warming treaty collapsed. Why? The United States insisted on a “pragmatic” provision that would lessen the impact of the treaty on our economy. Objecting, the 15-nation European Union and over 100 other countries argued that the U.S. proposal was simply a loop-hole to escape doing anything. In this column I want to examine this disagreement, which is basically a scientific policy debate balancing current economic pain against future environmental cost.

First, global warming. One of the earth’s most unusual traits is that it is warm. The moon is not. But unlike the moon, our earth is blanketed in an atmosphere that contains 0.03% carbon dioxide gas (CO2). The chemical bonds of the CO2 molecule strongly absorb radiation of far-infrared wavelengths — what we commonly think of as heat. For this reason, the relatively small amount of CO2 gas in our atmosphere acts to trap a lot of the heat radiating from the surface of the earth. Like the glass of a gigantic greenhouse, the blanket of CO2 keeps our world warm.

Our atmosphere contains about 700 billion tons of CO2 gas. Every year, photosynthesis removes about 10% of this, using the carbon atoms of the CO2 to build plants, and indirectly animals (which feed on plants, or on animals that do). Over the same year, plants and animals add about 10% of CO2 back to the atmosphere as they respire, converting organic food molecules back to CO2. Every time you exhale, you add CO2 to the atmosphere.

This equilibrium between photosynthesis removing CO2 and respiration putting it back has existed for millions of years. But now the industrial world is adding extra CO2 — lots of it. How? By burning fossil fuels (coal, oil, gasoline, natural gas).

There is roughly seven times as much CO2 trapped in fossil fuels as in the atmosphere. The extensive burning of fossil fuels that has accompanied industrialization is transferring massive amounts of this fossil fuel CO2 into the atmosphere. Before industrialization, the concentration of CO2 in earth’s atmosphere was approximately 260-280 parts per million (ppm). Now, after two centuries of extensive burning of fossil fuels, the concentration has risen a lot, and levels appear to be rising at a faster and faster rate. Since 1960, CO2 levels have increased from 315 ppm to more than 350 ppm. Today, the United States emits almost a quarter of the CO2 being added to the world’s atmosphere by burning fossil fuels. The U.S. National Research Council estimated in a recent study that, unchecked, world CO2 levels would pass 600 ppm (almost double current levels) as soon as 2035.

As CO2 levels have risen, so too has the average mean global temperature, about 1 degree C since 1900. This

may not seem a lot, but it has been enough to raise sea levels 5 cm. Scientists estimate the earth’s temperature could rise by up to 6 degrees C (10.8 degrees Fahrenheit) by 2100. If the climate becomes so warm that the polar ice cap melts (there is considerable recent evidence of this), sea levels will rise by more than 150 meters, flooding the entire Atlantic coast of North America for an average of several hundred kilometers inland.

Responding to this very real threat, some 170 countries signed the Kyoto Protocol in 1997. This agreement set targets to curb emissions of CO2 from fossil fuels by three dozen industrial countries. The goal was a 5.2% reduction from 1990 levels by the year 2012. The two-week UN-sponsored meeting that ended last Saturday was supposed to set the rules for countries to meet this target.

Now you might think this a straightforward agenda — just everybody reduce their burning of fossil fuels by 5.2 %. Not hardly.

The problem, in a nutshell, is that cutting back on burning fossil fuels risks dampening the current U.S. economic boom, as it would almost certainly make energy more expensive. Also, taking direct action to cut emissions by penalizing the wasteful energy habits of average Americans like you and me would not be particularly popular.

So the United States made what it dubbed a “pragmatic” proposal: that U.S. forest and agricultural lands that absorb CO2 by photosynthesis (so-called “carbon sinks”) should be credited for their contribution to reducing atmospheric CO2 levels. This would reduce the U.S. target by quite a bit. Combined with clever mechanisms for trading emission credits with other countries, the U.S. “carbon sink” proposal would allow the United States to reach half-way to its target without taking any significant action at all.

European countries objected strongly, as did much of the rest of the world. They saw our proposal as the U.S. simply avoiding doing anything.

So where’s the right here? It seems to me we must find some way to really reduce CO2 emissions, however painful the adjustment. The alternative is not to do so, leaving to our children a world we would not want to have to live in. There isn’t any third option. Next year the world will get together again and have another try at an agreement. We should try harder to reach one. The price of not doing so is just too high. 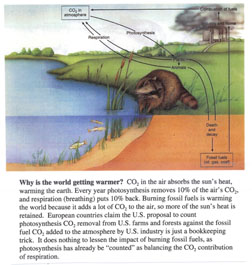