The Obama administration faced up to an unusual and unusually interesting legal issue these last weeks.  At the heart of it were polar bears.  You know, the big white ones that live in the artic and can be seen cavorting at the Saint Louis Zoo.  Who doesn’t love polar bears? A photo of a cute polar bear makes you just want to cuddle it.

As much as people are intrigued by polar bears and find them endearing, we usually prefer to admire them from a distancethrough a telephoto camera lens or across a fence and waterless moat in a zoo. Why?  Unlike other bears, polar bears eat people. Recent human attacks by polar bears reminds us of how dangerous the largest land carnivores are, no matter how cute and cuddly they appear. Human attacks by polar bears have been quite rare until recently, not because polar bears are particularly adverse to the taste of human flesh, but rather because the two rarely come into contact with each other.

Not so rare any more, for the native peoples that live near the Arctic Circle. There encounters with polar bears are becoming more frequent, and these encounters are often deadly. Three years ago a polar bear entered the small village of Ivujivik in northern Canada. Three young boys were playing hockey outside of the youth center in town when the polar bear approached them. The mother of one of the youngsters was nearby and saw the approaching polar bear. She ran over screaming at the bear to distract it from the boys. The bear turned on the mother and started attacking. The boys alerted a neighbor who shot and killed the bear. Amazingly, the mother survived this hand-to-claw street fight, but many other victims of polar bear attacks aren’t as lucky.

The authorities always pursue any bear involved in an attack and kill it, but it’s hard for me as a biologist to blame the polar bears. They are just doing what it is in their nature to do.  It’s just that until now nature hasn’t been bringing them this close to humans. Why are the bears encroaching where they never did before? The answeroverlapping habitats. In the past, most bear attacks have occurred at camp sites or other areas where humans have come into the bear’s habitat.  What we are now seeing is something quite different and new:  In Ivujivik and other arctic outposts, polar bears have traveled outside of their normal habitat and invaded a human community.

Why? In search of food..

Polar bears are roamers. They travel up to 15 miles a day, covering over 100,000 square miles in their lifetime. Each bear individually covers some 2%  of the five million square miles of the Arctic sea ice that makes up their entire range. What drives them to move is an endless search for food.  They feed primarily on seals that spend most of their time in the water. In search of a meal, a polar bear will sit perched over a hole in the ice. When a seal surfaces to breathe, the polar bear will grab it and drag it out. Because of its limited diet and method of hunting, polar bears only feed during the winter when the ice pack is largest and thickest. The bears move on shore and fast during the ice-free summer months, and migrate back to the ice when it reforms.

The Arctic ice is the only place where polar bears can successfully hunt. Without these ice platforms they cannot feed. Although they are strong swimmers, which allows them to travel long distances between large patches of ice, they don’t have the speed and agility of a seal in water, and so have little hope of catching and killing a seal in open water. Without the Arctic sea ice, polar bears would starve.  Sometimes, in desperation, they wander into human villages like Ivujivik and try to eat people.

And that is what brings us to today.  Distressingly, particularly to polar bears, the ice so vital to polar bear survival is melting away. Air and water temperatures are rising at northern latitudes as they are worldwide.  Anyone who reads a newspaper or scans news on a web-based site like the Beacon knows why — because of rising levels of  carbon dioxide in earth’s atmosphere, a process now universally dubbed global warming.  Global warming is caused when so-called greenhouse gases like carbon dioxide are produced as by-products in the burning of fossil fuels like coal and gasoline. These gases accumulate in the upper atmosphere and trap heat from the sun.

So you see, in a very real sense carbon dioxide emissions are endangering the very survival of this species. But wait a minute.  Don’t we have laws to protect species from human actions that endanger their survival?  Yes ,we do.  The Endangered Species Act prohibits actions that endanger threatened species, no matter the economic consequences. So shouldn’t we apply the Endangered Species Act here?  Isn’t this situation just what the act was enacted to address?

Good question, and one without a simple answer.  Before we address it, we must first access the size of the problem.  Scientists have found that the outer edges of the Arctic ice cap are retreating earlier in the season each year as global warming proceeds, and reforming later. Wildlife census data indicate that this is causing polar bears to migrate to land earlier, and to remain there longer. The result is that the polar bears have a shorter hunting season and a longer fasting season. 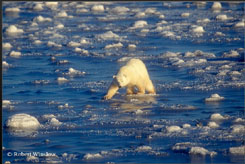 In 2005, polar ice cap melting started 17 days earlier than usual. The ice cap is also covering a smaller area, about 20 percent smaller than a decade earlier. Because polar bears are so dependent upon the Arctic ice cap for their survival and because the polar ice cap is melting, many conservationists  and many citizens  argue the polar bear should be formally classified as a “threatened species” under the Endangered Species Act.

Others say, “Wait a minute! The designation of a species as threatened under the terms of the Endangered Species Act  is supposed to be based their actual numbers, not upon speculations projecting possible falls in population sizes in the future. There are actually more polar bears now than there were in the 1950s.  Over-hunting in the first half of the 20th century had polar bear numbers reduced to 5,000. In response, the Marine Mammal Protection Act was passed that protected the bears from over-hunting and poaching. Its enforcement has returned their numbers up to over 22,000.  Thus, these folks say, it can be argued that polar bears are already protected, and that the classification as a threatened species is not necessary.

Now you can see the dimensions of the quandary faced by the Obama administration.  On the one hand, the “threatened species” classification does dictate that protecting a threatened species’ habitat is paramount to saving the species, and controlling carbon emissions is certainly something that current laws don’t require.  On the other hand, the Endangered Species Act was never intended to be applied on a global scale.

I think quite rightly, Obama has elected to avoid using the Endangered Species Act to combat global warming.  Instead, he has chosen a frontal assault on Congress to pass Global Warming legislation this session.  This approach has the great benefit that the economic consequences of legislation aimed at reducing carbon emissions can be considered carefully and debated fully before any changes are instituted. But change things we must, and soon.

What do the polar bears do in the meantime? Attempts to place polar bears on the threatened species list may have failed in the legislative sense, but they have certainly done a great deal to bring the desperate plight of these bears to the attention of more people.

Throughout earth’s recent history, global temperatures have oscillated about every 100,000 years from very cold periods, called ice ages, to warmer periods where glaciers melt. Polar bears have been around for a long time, and have survived previous interglacial periods.  Perhaps they will muddle through and survive this one.

And perhaps not.  It is hard to ignore the fact that carbon dioxide levels in our atmosphere are at record highs — at no point in the last 400,000 have they been this high.  And if we don’t act quickly, everything points to levels getting even higher in the future, and the arctic even warmer.  The issue becomes one of choosing between different awful futures for the bears. How hot will humans let the oceans and atmosphere become?

When Washington legislators talk “cap and trade” vs. pollution taxes over the coming months, we would all be well served if our senators and representatives kept the plight of the polar bear in mind. Their ice cap home is shrinking. The photo here shows a satellite view of the polar ice cap last year and, in red, the size of the polar ice cap thirty years ago, in 1979.

As the ice melts ever further each summer, the polar bear is trapped on land, not able to hunt.  Every year it takes longer for the ice to reform, the polar bears inching closer to starvation as they waiting out the delayed freezing. And as the border of the ice cap moves ever farther away from land, the starvation-weakened polar bears have to swim farther to get out to it.  This is a game of “chase the carrot” the bears cannot win.  Eventually they will drown. All of them.

The only way the bears can win is if we do. If you are a polar bear, the  challenge you face is to survive until the human law givers in Washington act, and then to keep struggling through the long years of climate recovery.   If every time a Washington legislator votes on climate change issues in the coming months, he or she tries, just for a moment, to see the issue as a polar bear sees it, we all will have a better chance at a fruitful outcome. It isn’t only polar bears that are threatened by global warming. We too are an endangered species.  But their plight helps to focus our attention on the danger to our future we all face together. 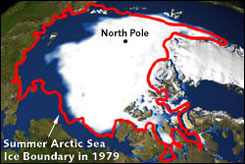