I have an awful memory for faces. Introduced to someone, five minutes later I may have no recollection of their name. After years, the names of many of my wife’s friends are still embarrassingly elusive.

A study published this Monday in the Journal of Experimental Psychology by Psychologists Catherine Fritz and Peter Morris suggests that repetition might help the introduction-impaired like me remember unfamiliar names. Groups of nine college students were asked to sit in a circle. One member said his or her name. In turn, the persons sitting to the left repeated the names that had been said and added their name, until the last person recited the names of every person in the group.

Like the game “Simon Says,” the secret is repetition. The more times the circle of students repeated the process, taking turns being first, the better they became at remembering each other’s names.

Its suprising how much sticks, with repetition. The college students in Fritz and Morris’s study could retrive 75% of the names they had learned after 30 minutes, 40% two weeks later, and fully 27% 11 months later!

Why does repeating something make it easier to learn? Recent advances in the molecular basis of learning allow a suprisingly crisp and clear answer to this question.

In revolutionary work I described in this column last September (Exciting new evidence points the way to how we learn – 9/12/99), a neurobiologist named Joe Tsien demonstrated that learning is a molecular conversation that takes place between nerve cells in the brain. Neurobiologists have long known that learning takes place when new connections are made between brain nerve cells. Tsien’s great advance was to prove that special communications channels in the nerve cells of our brains called NMDA receptors produce associative learning by facilitating the process of making new connections.

Tsien found that altering a key subunit of mouse NMDA receptors made the mice smarter. It turns out that the NMDA receptor is also sensitive to the activity of surrounding nerve cells. Imagine I were talking with you in a crowd and say your frirst name. If you reply with your last name when I speak, I reward you with $100. Because it is the specific word I am keying in to, anyone else that happens to say that word at exactly the same time gets $100 too. Soon that person will be speaking whenever you do.

Associative learning works just this way. When you say a name and see a face, the two brain patterns become associated because NMDA receptors strengthening one set of connections strengthen the other as well. 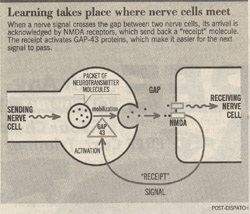 Tsien, in subsequent studies reported this March, generated a “knockout” mouse which lacked the gene coding for the key part of the NMDA receptor. Using molecular wizardry, he and his coworkers were able to restrict this effect to the hippocampus, where learning takes place, with no effect on the rest of the brain. These mice proved to be lousy at learning, as his previous results had predicted they would be. Without proper NMDA receptors, the mice were genetic dunces.

In quite independent research, a research team headed by Aryeh Routtenberg of Northwestern University reported last week in the Proceeding of the National Academy of Sciences that another element of Tsien’s theory also seems to be right. A key element of Tsien’s suggestion is that when a nerve signal passes from one cell to another, a receipt is sent back to acknowledge that the signal has been received. This receipt is also sent to any other nerve cells that happen to be firing at the same time. When this receipt arrives back, it does things that facilitates the passing of future signals. This strengthens the nerve connection, causing learning.

What things? Routtenberg has shown that a protein called GAP-43 is activated by the NMDA receipt. By adding a “READ ME” signal called a promotor to the GAP-43 gene, his research team genetically engineered mice to produce extra levels of GAP-43 protein. These mice were much quicker to learn than untreated mice. Apparantly GAP-43 makes it easier for a cell to fire its neurotransmitter molecules. However, if the NMDA receptors of these little Einsteins were inhibited, the mice lost their extra smarts. The NMDA receptors are needed to produce the receipt signal, the GAP-43 proteins to receive it.

Now we see why repetition enhances learning. Bombarding GAP-43 with lots of receipts gets nerve connections to form more readily. Repeating the same combination of nerve signals, again and again, activates GAP-43 again and again in the nerve cells that form that memory.

I learned to multiply by memorizing the “times tables” by rote when I was a child. Now today I don’t have to use new math to figure out what 9X7 is — I KNOW it’s 63. Millions of GAP-43 molecules created by thousands of repetitions when I was ten contributed to the formation of the nerve connections which tell me so. It may not be the trendy way to learn, but repetition works.