This year’s physiology Nobel explains how LeBron James is able to sink a jump shot without looking at the basket. 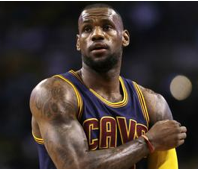 It is June of 2015 and you are watching the NBA championship game. LeBron James has the ball and is moving past the basket, closely guarded. Without looking back, he unexpectedly tosses the ball back over his shoulder. The ball rises up in a tight arc   and drops smoothly right through the net, behind James, who is still moving away from the basket. Two more points among the thirty he scores that night.

But wait a minute. LeBron James wasn’t even looking at the basket! How did he DO that? To those who watch a lot of basketball, the shot does not come as a great surprise. The over-the-shoulder basket was a specialty of Bill Russell, a great of a past generation, and of Bill Bradley, one of the most accurate of all shooters from out on the floor in the days before you got three points for doing it. When Bradley was interviewed about his over-the-shoulder shot by a neophyte reporter writing his first article for the New Yorker, the reporter wrote that Bradley tossed a ball over his shoulder and into the basket while he was talking and looking the reporter in the eye. The reporter retrieved the ball and handed it back to him. “When you have played basketball for a while, you don’t need to look at the basket when you are in close like this,” he said, throwing it over his shoulder again and right through the hoop. “You develop a sense of where you are.”

A sense of where you are. That is what LeBron James had that June night. But still – how did he DO that? Interestingly, the scientists who answered that question were awarded the Nobel Prize in Physiology this year for sorting this mystery out.

Like many Nobel prize stories, this one starts a long time ago — in 1948, when an experimental psychologist in London named Ed Tolman began studying how animals learn to navigate. He came to the conclusion that animals form some sort of cognitive “map” in their brain that allows them to move sensibly through their environment. No idea, of course, of what a cognitive map might look like, or where it might be located in the brain. The prevailing view among behavioral psychologists was that Tolman was being overly simplistic, and that his so-called “map” was not a thing, but rather a gestalt resulting from a complex web of sensory and motor neural relationships. Tolman’s “map,” in their view, was a metaphor.

There the problem sat until a young researcher, John O’Keefe, began to study animal behavior in the late 1960s. Experimental neurobiology was exploding with new approaches, and he was one of the first investigators to record the activities of single cells in the brain. Working carefully, O’Keefe was able to implant a tiny electrode into a single cell within the brain of a rat and record when that cell emitted a signal (in researcher parlance, the cell is said to have “fired”). He chose cells in the hippocampus, a small region of the brain that appears to be involved with balance, and after inserting the electrode let the experimental rat run about in a box. As the rat ran around exploring the box, O’Keefe recorded exactly where the rat went, and when the cell fired. The firing pattern was unlike anything he might have expected! Individual cells fired only when the rat was at a particular place on the floor of the box, and nowhere else. Different hippocampus cells fired at different places in the box. 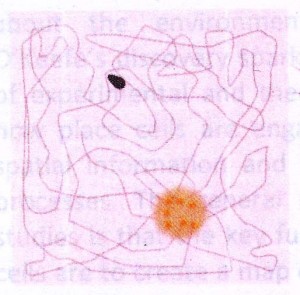 O’Keefe called the individual hippocampus cells “place cells” and concluded that an animal’s memory of a place is stored as a specific combination of place cells in the hippocampus. Tolman’s map was real after all. For his discovery of place cells, O’Keefe was awarded half of this year’s Nobel Prize in Physiology.

Now we must fast-forward to the 1990s. Tolman’s exciting finding had sparked a large number of scientists to study how place cells create a map of the environment within the brain. Among them was a young couple, Edvard and May-Britt Moser, PhD students at the University of Oslo in Norway. Completing their degrees, they went to O’Keefe’s lab as post-docs, but after only a few months accepted a job offer at a small university in northern Norway. Away they went – but O’Keefe has lit a fuse in their imaginations.

Setting up their own small lab in a basement, they set out to address a simple question about O’Keefe’s hippocampus maps: might the firing of place cells be triggered by activity outside the hippocampus? A simple question, it led right off an intellectual cliff. At first, studies of cells in a structure adjacent to the hippocampus seemed to show place cells similar to those discovered by O’Keefe in the hippocampus. Then the young investigators did something only young investigators tend to do – they thought “outside the box.” 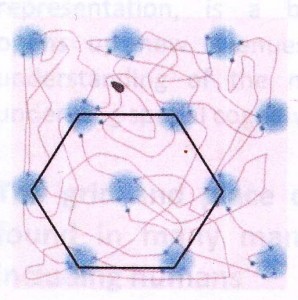 The way the Mosers changed the standard O’Keefe experiment was the way an inquisitive child might – they made a bigger box. Allowed to run about in this far larger environment, the firing of the place cells they had found showed an astonishing pattern: Individual cells were active in multiple places! These firing locations were not at all random – instead, a cell’s firing locations form the nodes of a grid, interlacing hexagons like the chambers of a beehive. In recognition of this repeating pattern, the Mosers called these cells “grid cells.” For their discovery of grid cells, they share the other half of this year’s Nobel Prize in Physiology.

This was a very exciting result, as a grid system allows the brain to measure how far a body moves, and so put scale to the place map in the hippocampus. Here’s how (you will need to look at the diagram to get this): Imagine the firing pattern of a particular grid cell is the orange grid of circles on the diagram. The pattern of orange circles forms a hexagon. 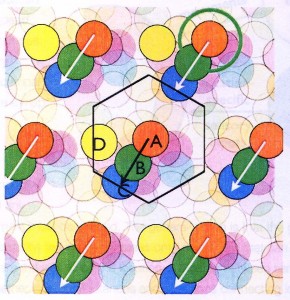 Now imagine a second grid cell has a firing pattern represented by the green circles, and a third grid cell a pattern represented by the blue circles. Now look what happens when the animal moves from where it is on top of the orange node, travelling towards the lower left: the green grid cells fire, then the blue grid cells. This gives the brain information about direction, speed, and distance! As the rat moves, the grid cell system is constantly updating the place map of the hippocampus with information about distance and direction of movement.

It is important to remember that humans are not rats. Often experiments carried out on rats produce results that differ from what happens when the same experiment is carried out in humans. Who says a human like LeBron locates himself in space the same way a rats does? Actually, it seems likely. Human grid cells were reported in 2013, and while the experiments are more indirect (you can’t go around inserting electrodes into someone’s brain and ask the person to walk around while you record), human grid cells seem to work just like rat grid cells.

So that’s how LeBron James does it. He’s got great grid cells!