Cancer can occur in almost any tissue, so a bewildering number of different cancers occur. Tumors arising from cells in connective tissue, bone, or muscle are known as sarcomas, while those that originate in epithelial tissue such as skin are called carcinomas. In the U.S., the three deadliest human cancers are lung cancer, cancer of the colon and rectum, and breast cancer (table 1). Lung cancer, responsible for the most cancer deaths, is largely preventable; most cases result from smoking cigarettes. Colorectal cancers appear to be fostered by the high-meat diets so favored in the United States. The cause of breast cancer is still a mystery, although in 1994 and 1995 researchers isolated two genes responsible for hereditary susceptibility to breast cancer, BRCA1 and BRCA2 (Breast Cancer genes #1 and #2 located on human chromosomes 17 and 13); their discovery offers hope that researchers will soon be able to unravel the fundamental mechanism leading to hereditary breast cancer, about one third of all breast cancers.

Table 1 Incidence of Cancer in the United States in 2002

In the United States in 2002 there were an estimated 1,284,900 reported cases of new cancers and 555,500 cancer deaths, indicating that roughly half the people who develop cancer die from it.

The association of particular chemicals with cancer, particularly chemicals that are potent mutagens, led researchers early on to the suspicion that cancer might be caused, at least in part, by chemicals, the so-called chemical carcinogenesis theory. Agents thought to cause cancer are called carcinogens. A simple and effective way to test if a chemical is mutagenic is the Ames test (figure 3), named for its developer, Bruce Ames. The test uses a strain of Salmonella bacteria that has a defective histidine-synthesizing gene. Because these bacteria cannot make histidine, they cannot grow on media without it. Only a back-mutation that restores the ability to manufacture histidine will permit growth. Thus the number of colonies of these bacteria that grow on histidine-free medium is a measure of the frequency of back mutation. A majority of chemicals that cause back mutations in this test are carcinogenic, and vice versa. To increase the sensitivity of the test, the strains of bacteria are altered to disable their DNA repair machinery. The search for the cause of cancer has focused in part on chemical carcinogens and other environmental factors, including ionizing radiation such as X rays. 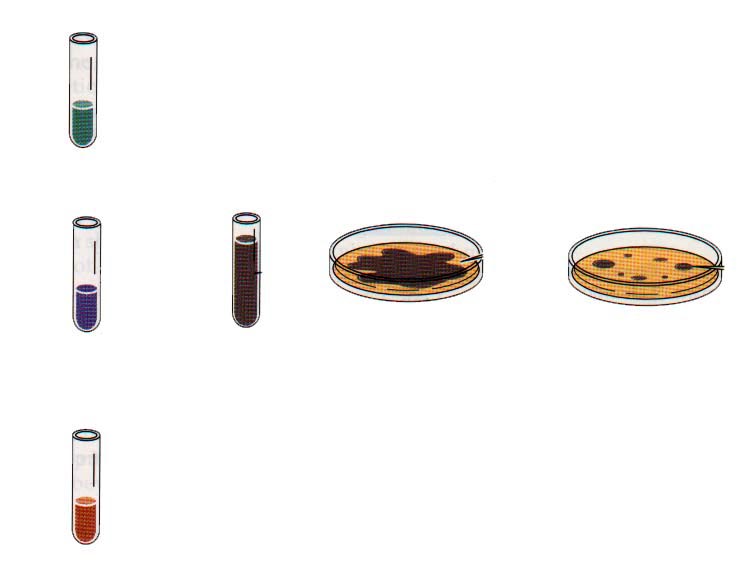 Figure 3
The Ames test. This test is uses a strain of Salmonella bacteria that requires histidine in the growth medium due to a mutated gene. If a suspected carcinogen is mutagenic, it can reverse this mutation. Rat liver extract is added because it contains enzymes that can convert carcinogens into mutagens. The mutagenicity of the carcinogen can be quantified by counting the number of bacterial colonies that grow on a medium lacking histidine.

Some Tumors Are Caused by Chemicals

The chemical carcinogenesis theory was first advanced over 200 years ago in 1761 by Dr. John Hill, an English physician, who noted unusual tumors of the nose in heavy snuff users and suggested tobacco had produced these cancers. In 1775, a London surgeon, Sir Percivall Pott, made a similar observation, noting that men who had been chimney sweeps exhibited frequent cancer of the scrotum, and suggesting that soot and tars might be responsible. British sweeps washed themselves infrequently and always seemed covered with soot. Chimney sweeps on the continent, who washed daily, had much less of this scrotal cancer. These and many other observations led to the hypothesis that cancer results from the action of chemicals on the body.

Demonstrating That Chemicals Can Cause Cancer

It was over a century before this hypothesis was directly tested. In 1915, Japanese doctor Katsusaburo Yamagiwa applied extracts of coal tar to the skin of 137 rabbits every 2 or 3 days for 3 months. Then he waited to see what would happen. After a year, cancers appeared at the site of application in seven of the rabbits. Yamagiwa had induced cancer with the coal tar, the first direct demonstration of chemical carcinogenesis. In the decades that followed, this approach demonstrated that many chemicals were capable of causing cancer. Importantly, most of them were potent mutagens.

Because these were lab studies, many people did not accept that the results applied to real people. Do tars in fact induce cancer in humans? In 1949, the American physician Ernst Winder and the British epidemiologist Richard Doll independently reported that lung cancer showed a strong link to the smoking of cigarettes, which introduces tars into the lungs. Winder interviewed 684 lung cancer patients and 600 normal controls, asking whether each had ever smoked. Cancer rates were 40 times higher in heavy smokers than in nonsmokers. Doll’s study was even more convincing. He interviewed a large number of British physicians, noting which ones smoked, then waited to see which would develop lung cancer. Many did. Overwhelmingly, those who did were smokers. From these studies, it seemed likely as long as 50 years ago that tars and other chemicals in cigarette smoke induce cancer in the lungs of persistent smokers. While this suggestion was (and is) resisted by the tobacco industry, the evidence that has accumulated since these pioneering studies makes a clear case, and there is no longer any real doubt. Chemicals in cigarette smoke cause cancer.

In ongoing investigations over the last 50 years, many hundreds of synthetic chemicals have been shown capable of causing cancer in laboratory animals. Among them are trichloroethylene, asbestos, benzene, vinyl chloride, arsenic, arylamide, and a host of complex petroleum products with chemical structures resembling chicken wire. People in the workplace encounter chemicals daily (table 2).

In addition to identifying potentially dangerous substances, what have the studies of potential carcinogens told us about the nature of cancer? What do these cancer-causing chemicals have in common? They are all mutagens, each capable of inducing changes in DNA.

Cancers occur in all tissues. Chemicals that produce mutations in DNA are often potent carcinogens. Tars in cigarette smoke, for example, are the direct cause of most lung cancers.