Like their thecodont ancestors, dinosaurs are extinct diapsid reptiles, often-bipedal—that is, they are extinct reptiles with a pair of holes in the skull behind each eye (figure 45.55), many of which walked on two feet. The great marine (ocean-swimming) reptiles of those times, ichthyosaurs and plesiosaurs, were not dinosaurs, and neither were the flying reptiles, the pterosaurs—these other reptiles did not walk on land as dinosaurs and thecodonts did. Huge therapsids like the sail-back Dimetrodon did walk on land, but they were not dinosaurs, either—these ancestors of mammals were synapsids, with but one hole in the skull behind the eye. 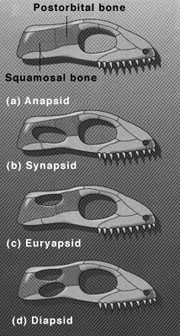 Crocodiles are also diapsid reptiles, like dinosaurs direct descendants of thecodonts. Are crocodiles dinosaurs? No. What makes dinosaurs unique, what sets them apart from both crocodiles and thecodonts, are key changes in how they stand and run.

A variety of unique features are shared by all dinosaurs that set them apart from thecodonts or any other vertebrates, among them the shape of hand, foot, thighbone, and ankle. Two key anatomical changes are of particular importance, changes which improved speed and agility, providing an important evolutionary advantage to early predacious dinosaurs.

Figure 45.56
Ankle joints of (a) bipedal thecodonts and crocodiles and (b) dinosaurs and birds. The ankle bone in dinosaurs was firmly attached to the shin bones, and this simple hinge construction allowed for a much stronger joint.

A dinosaur’s foot is quite different from a human one. The long bones of the foot are not parallel to the ground, as yours are, but bunched together and running upward to the ankle joint, like a horse’s do—so, like horses, dinosaurs walk on their toes at all times. Long slender toes give the dinosaur foot a firm grip on the ground. Nearly all dinosaurs have only three walking toes on the foot. Their footprints are very similar to those of birds!

There Are Two Orders Of Dinosaurs

Early in the evolution of dinosaurs, the structure of the hip evolved in two distinct directions (figure 45.57). There are three bones that meet at the dinosaur hip socket, with large powerful leg muscles attached to each of them. This distinction in hip structure is so clear that it is used to define two orders of dinosaurs—saurischians and ornithischians (see table 45.3). 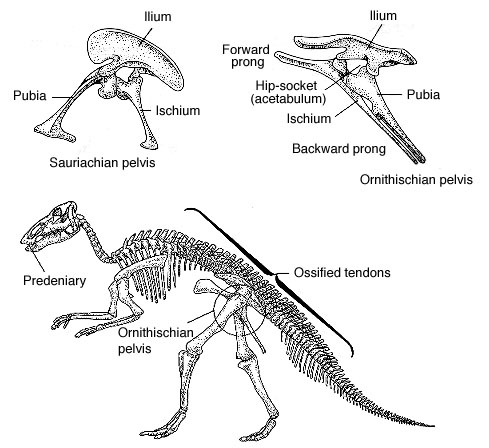 Saurischians. In one kind of dinosaur, the three hip bones radiated in different directions. Because that is the way a lizard’s do today, these are called lizard-hipped dinosaurs. Many of the largest of dinosaurs were lizard-hipped, including enormous vegetarian sauropods and meat-eaters such as Tyrannosaurus rex.

Ornithischians. In the other kind of dinosaur, the forward-projecting of the three hip bones is turned back parallel to the rear-projecting one. Because that is the way it is in birds today, these are called bird-hipped dinosaurs. The names do not imply relationships—birds, for example, actually evolved from lizard-hipped dinosaurs!

The suggestion that dinosaurs may have been endothermic has long been an area of spirited disagreement among paleontologists (those who study fossil animals). Because dinosaurs have been traditionally grouped among the reptiles, and living reptiles are all ectothermic, it has been common practice to simply assume that dinosaurs were ectothermic too. But dinosaurs actually resemble endothermic birds far more closely than they do ectothermic lizards, so arguments have been advanced that dinosaurs were in fact endotherms, animals whose body temperature is determined by the heat generated by their own metabolism (figure 45.58). Among these arguments are the following:

Figure 45.58
Dinosaurs and endothermy. In truly endothermic animals, the extremities are kept at the same temperature as the rest of the body. By analyzing the pattern of oxygen isotopes laid down in the fossilized bones, scientists have found that some dinosaurs in the Cretaceous exhibited a pattern of oxygen isotopes that indicates an endothermic heat distribution. Sauropods, however, may have been inertial homeotherms, maintaining a constant body temperature due to their size. While their extremities may have contained less heat than the main bulk of the body, sauropods likely maintained a high body temperature simply because their large body volume allowed them to retain heat.

Maternal care is rare among reptiles, while almost universal among mammals and birds. Among the living reptiles, only crocodiles care for their young. Dinosaurs laid their eggs in nests, and many kinds of dinosaurs then abandoned their eggs to hatch untended, leaving the hatchlings to fend for themselves, much as a turtle does today. However, in the last 15 years paleontologists examining the nests of hadrosaurs have come across clear evidence that hadrosaurs cared for their young: egg shells within the nests were broken into tiny bits, as if trampled underfoot by hatchlings for a long time; young of different ages died within single nests; dead hatchlings had worn teeth, and so must have been fed in the nest; leg bones of hatchlings are not yet fully formed at birth, and so are not yet ready for walking. These findings indicate the young hadrosaurs were reared in their nests for a considerable time after hatching, fed by their parents. Hadrosaurs appear to have nested in colonies, huge herds migrating across North America in the late Cretaceous, returning each season to nesting grounds to rear young.