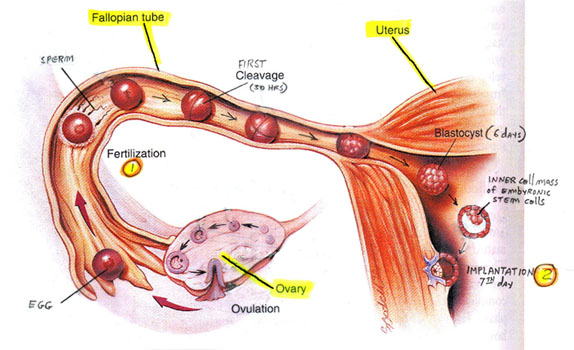 Four widely-held views about when human life begins. 1. At fertilization; 2. At implantation; 3. at quickening; 4. when independent survival is possible.

When Does Human Life Begin?

The story of when human life begins has a checked past. Centuries before people knew of sperm and eggs, Aristotle argued that the fusion creating a new person did not exist until quickening, the first noticable movements in a womans womb. He reckonded quickening occurred 40 days into preganancy (18-20 weeks is the actual time). The 40-day rule was picked up by Jewish and Muslim religions. In 1591 Pope Gregory XIV supported this view of delayed animation and ensoulment. The Catholic Church did not reach its current conclusion that life begins at fertilization until 1896, when Pope Pius IX condemmed abortion at any age after the moment of conception. Many Jewish theologians now argue that life begins 7 days into pregnancy, with implantation of the embryo.The United States Supreme Court takes the position that human life begins much later, when the fetus becomes capable of independent life if separated from the mother — roughly the third trimester.

Embryonic stem cell research is quite controversial, as it involves many ethical issues, not the least of which is when human life begins.