Xavier Scruggs, a terrific batter recently brought up from the minors, has never hit a major league home run, for reasons that have a lot to do with physics

As Major League Baseball warms up for its mid-season All Star Game on July 14, my attention turns to the ball field. In part this is because I live in Saint Louis, and here we love our Cardinals. Also because I love the science of baseball, and the maturing of the season has by now begun to reveal this year’s masters at ballpark physics. And success in baseball is all about physics. Nowhere is this more true than in the ultimate baseball act, hitting a home run.

The batter above is Xavier Scruggs, novice first baseman for the Saint Louis Cardinals. You see him in the act of hitting a baseball, something he is very good at doing: His batting average since being called up from the minors a month ago is .375; in his last two starts he has gone 6 for 8 with 4 RBI. But he has not hit a single home run. So Scruggs sits on the bench a lot, while other first basemen play who can hit one out of the park at least occasionally.

So why is it so hard to hit a home run? To sort this out, imagine you are at the plate in Xavier’s shoes, your muscles tensed with anticipation, holding a 42 inch wooden bat while you wait for the precise instant to swing at a 3 inch, 5 ounce cowhide-wrapped ball hurtling toward you at over 90 miles per hour. At this speed, it will take a little less than four-tenths of a second for the ball to travel the 60 feet, 6 inches from the pitcher’s mound to home plate.

This famous diagram, by Robert Adair of Yale University, lays out your challenge clearly. In that brief interval, if you decide to swing the bat, and have the good fortune to hit the ball, you will be carrying out a physics experiment on the transformation of energy. As you can imagine, there is a lot of energy invested in a baseball travelling 90 miles per hour. This energy of motion is called kinetic energy by scientists, and it’s easy to appreciate its raw power. Not so evident is the latent power in the muscles of the batter awaiting the pitch. Like coiled springs, their energy is ready to be put into action. This stored energy is called potential energy by scientists, energy ready to be put to work swinging the bat. The more potential energy the batter’s muscles release, the faster the speed of the bat through the swing.

Obviously there is a lot of energy at play here. The batter has converted a considerable amount of potential energy from his arm and shoulder muscles to the kinetic energy of the swinging bat. Similarly, the pitcher has converted potential energy from his throwing arm to the kinetic energy of the speeding baseball. What happens in the instant when the ball hits the bat is the difference between a home run, a fly ball, and the single or double “hit” Scruggs is so good at getting.

A lot of scientists’ time has been devoted to understanding that brief 1/1,000th of a second, the measured duration of the collision of a pitched baseball on a swinging bat.

The Sports Biomechanics Laboratory at the Davis campus of the University of California has for decades carried out detailed examinations of the scientific principles governing baseball. Many of the researchers in the Lab are graduate and undergraduate students in biomedical engineering. The student researchers have learned a lot about what it takes to hit a home run. The on-the-field mechanics of baseball: how pitchers throw, how batters swing — are examined through equations that attempt to simulate what happens when bat meets ball. When a simulation seems to take the laws of physics into account properly, it is then checked by direct measurements to see how well the simulation predicts what actually happens.

First lets look at how the ball is thrown. Three variables turn out to be of particular importance:

Now consider how the ball is hit. Again, three variables have been found to be of prime importance: 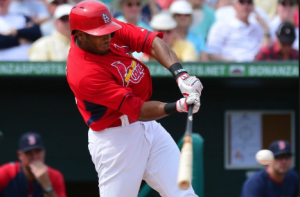 Because of the enormous kinetic energy invested in the baseball when a big league pitcher throws a 90 mph fast ball, to hit a home run Xavier Scruggs must act very fast, and very precisely. He has less than a quarter second to see the pitch, judge its speed and location, decide what to do, and then start to swing. The bat must meet the ball within an eighth of an inch of dead center to avoid a foul ball, at precisely the right millisecond to generate the correct arc to send it out of the park. A home run by Xavier, should he hit one, is all about precision in the application of energy. See? Ballpark physics doesn’t have to be boring…