Eliminating malaria may soon be possible, spreading resistance genes among mosquito populations in a chain reaction driven by CRISPR

One of the nightmares associated with genetically modified (GM) crops has been the worry that a genetic change engineered in the laboratory might somehow “escape” from a target crop and spread like fire through natural populations, with unknown and uncontrollable consequences. “Don’t fool with Mother Nature,” they warn – and they are not smiling.

Over the last year, their nightmare has come one step closer to reality – and, paradoxically, humanity may be greatly enriched by that step. The step involves CRISPR, a precise and easy-to-use gene editing system that was the subject of a recent BiologyWriter article, Editing Your Genes with CRISPR.  One of the ways bacteria protect themselves from viruses is to store fragments of viral DNA, and cut up any sequences that exactly match the fragments. Researchers have recently learned how to substitute other DNA sequences for the viral ones, so that the cutter will target these new sequences instead — using this approach, called CRISPR, researchers can target any gene for cutting. If the researchers also at the same time supply a new sequence to the cell’s gene repair system, the cell will incorporate this new DNA to repair the cut area. Presto! You have changed one gene sequence to another… AND, if you do these edits in cells that give rise to sperm or eggs, the changes you have made will be inherited by future generations.

This is all in the lab, of course. Released outdoors, modified animals or plants would not take over wild populations, for the simple reason that most modifications do not improve an organism’s ability to survive and reproduce. In a sexually-reproducing diploid species like us, a gene has a 50% chance of being inherited by each parent, so that without improved survival, its frequency doesn’t change from one generation to the next. Every beginning biology student learns this as the Hardy-Weinberg rule.

But what if you stacked the deck? If the gene is passed on MORE than half the time, it could quickly increase in frequency within a population, couldn’t it? This sort of bias, called “gene drive” by professional biologists, doesn’t happen often in nature — but might it be possible to find a way to do it?

Yep. In 2003 British geneticist Austin Burt suggested a thought experiment: use target-specific DNA-cutting enzymes (called endonucleases) to attack mosquito genes necessary for transmitting the malarial parasite. Because the DNA-cutting enzyme would act on both chromosomes, the effect would be to change the 50% chance of the change being inherited to 100%. In effect, Burt said, the targeted nature of the nuclease attack would DRIVE the gene change through the population. 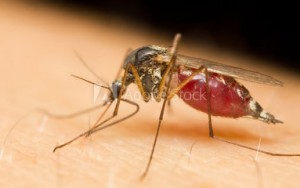 In 2015 Burt’s theoretical idea of an endonuclease drive was put to the test in Panama, and succeeded in reducing wild populations of dengue fever-carrying Aedes aegypti mosquitos 93%. Gene drives really work, just as Burt said they would

Enter CRISPR, which allows a particular gene sequence to be replaced by a new one devise in the laboratory. What if that new sequence was a two-part cassette that included not only the gene to be replaced, but also a copy of the CRISPR sequence? Do you see? A gamete with this cassette in its DNA will act in a fertilized egg on the DNA of the gamete contributed by the other parent, so that BOTH of an offspring’s chromosome sets now contain the cassette, and all of that individual’s offspring will bear the “new gene plus CRISPR” cassette. In future, every individual mated by any of these offspring will suffer the same fate, as will all of their offspring — a chain reaction!

Now imagine again Burt’s proposal of a gene drive for mosquitos. DNA researchers in the laboratory could insert into a mosquito a DNA cassette containing both CRISPR and a gene preventing transmission of the malarial parasite, directing CRISPR to cut the original but not the edited version of the gene. Released outdoors, this mosquito would mate with a wild individual, their offspring inheriting one wild and one laboratory copy of the parasite transmission gene. 50% transmission, right? But now CRISPR attacks the normal wild copy, inserting in its place the edited version + CRISPR. And so it begins: A CRISPR-driven chain reaction. 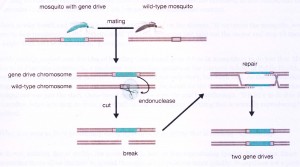 When tested in fruit flies in early 2015, this sort of CRISPR-driven chain reaction proved to be more than just an interesting possibility – it really works! In fact, it is shockingly efficient as a gene drive. Using a CRISPR drive cassette, researchers at UC San Diego “drove” a recessive mutation that blocks pigmentation of fruit flies from a 50% chance of being inherited to 97%!

Geneticists are already busy at work building a “Burt” laboratory mosquito with a CRISPR cassette containing the genes necessary to block parasite-transmission. Using this CRISPR gene drive, geneticists hope to be able to drive the parasite resistance genes into and through wild mosquito populations, and so eliminate malaria. Over half a million people die every year from malaria, so what these researchers are trying to do is no small thing — and think of the range of other diseases that could be conquered using a similar approach.

A little scary, though. CRISPR gene drives would allow any scientist to spread nearly any gene alteration through nearly any sexually reproducing population. Humans don’t reproduce as rapidly as mosquitos, of course, so it would take hundreds of years for a CRISPR-driven change to spread through human populations. And yet in 2015 we hear of a Chinese researcher using CRISPR to modify the genomes of nonviable human embryos.

Surely some sorts of safeguards are in order. This autumn The US National Academy of Science and the National Academy of Medicine are convening researchers and other experts “to explore the scientific, ethical, and policy issues associated with human gene-editing research.” While the potential for future good is great, decisions about when and how to use CRISPR gene drives should be made collectively. If we are going to fool with Mother Nature, we should do it carefully.