With a new easy-to-use tool called CRISPR, researchers are now able to edit our genes, a prospect both promising and a little scary. 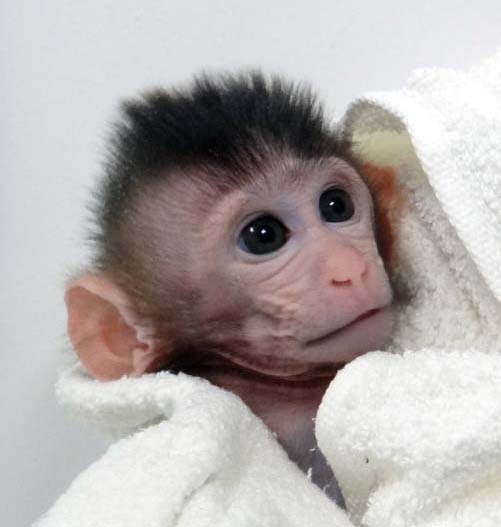 What is CRISPR, and how does it work? Lets start with the cute monkey you see on this page. He is a gene pioneer. Last year his genes and those of a twin brother were deliberately manipulated by Chinese researcher Yingxu Huang. Two of the monkey’s genes were targeted by Huang, one regulating the monkey’s metabolism and the other involved in its immune system. For each gene, Huang replaced the normal monkey sequence with one he had manufactured in the lab. The healthy but slightly puzzled monkey you see here was the result. Now an integral part of his chromosomes, the Huang versions of the two genes will be inherited by all of his offspring. The ability to reach in and “edit” the genes of a primate — man or monkey — is astonishing, undreamed of until pioneering advances announced only two years earlier.

So how did Huang pull this off?  By using a recently-discovered, powerful tool for editing genes called CRISPR. This awful name, which we will explain in a moment, reflects the history of the tool’s discovery. Like many important scientific advances, CRISPR’s discovery was unexpected. The story starts several decades ago, with work being done in a quite different scientific area. In 1987 Japanese biologists were using the powerful new gene sequencing technologies to study the DNA sequences of bacteria. One of the researchers observed an odd repeating pattern within the DNA sequence at one end of a bacterial gene: A sequence of several dozen DNA bases was followed by the same sequence in reverse, then 30 seemingly random bases of “spacer” DNA. This 3-part pattern was repeated, with different sequences of the random spacer DNA, again and again.  What grabbed the researcher’s attention was the DNA sequence repeated in reverse. Why of interest? Because RNA molecules copied from a DNA sequence repeated in reverse (called palindromes) fold back on themselves. This looped RNA can then binds to proteins, something single-stranded RNA cannot do. The loop’s sequence of nucleotides determines to which protein it attaches. It seemed to the researcher that these gene clusters were somehow designed to interact with a protein.

What protein? When the palindromes discovered by the Japanese researcher were examined by other researchers, the protein was identified: the RNA loops bind to a DNA-cutting enzyme called Cas9. The result?  A DNA-chopper that can link to a “spacer” RNA sequence. Not very exciting, right?

The next step in this journey of discovery was not taken for more than a dozen years, until 2005, when genome sequence comparisons made from data bases stored on the internet revealed that the 30-base spacer DNA sequences originally identified by the Japanese researcher, thought to be random, actually were not random at all — they matched DNA sequences found in the genomes of viruses that infect and kill bacteria. The researcher had, without intending to, discovered a weapon bacteria use to fight viruses! How does this work? First the “spacer” RNA binds invading virus DNA of matching sequence, then the Cas9 DNA-cutting enzyme attached to the loop cuts up the virus DNA!

Now, quickly, came the key advance that will affect all of us. In June of 2012, researchers Jennifer Doudna and Emmanuelle Charpentier, using now-standard gene engineering approaches, showed that any 30-base sequence can be substituted for the spacer sequence. Why is this the key advance? Because it allows the researcher to target any gene for modification or destruction! What was an arcane research finding became, with one stroke, a powerful tool.

This tool, called CRISPR (the initials of a very awkward name: “Clustered Regularly Interspersed Short Palindromic Repeats”), powerful and easy to use, is rapidly altering the scientific landscape. One example: In 2014 AIDS researchers used CRISPR to protect against infection by HIV, the virus that causes AIDS. Every AIDS infection begins with the entry of an HIV particle into a human cell, an entry which requires a door, a cell membrane protein called CCR5. CRISPR can be used to disable CCR5 and thus block this door. In a test of this approach, individuals with their CCR5 gene destroyed by CRISPR resisted HIV infection. Indeed, in one of six patients tested, the HIV virus vanished altogether. An AIDS cure?
Importantly, genes can be edited as well as disabled. Cells constantly “proofread” their DNA, inspecting the genes for damage. If a DNA break like that caused by Cas9 is encountered before the chromosome replicates, the cell immediately attempts to correct the problem: its proof-reading enzymes chop out the damaged gene, so it can be replaced with a newly-made sequence copied from the gene’s twin found on the cell’s companion chromosome.  It is during this replacement process that gene engineers edit the gene: the Cas9-treated cell is flooded with lab-manufactured copies of the gene sequence intended by the researcher to replace the Cas9-targeted one. Inundated with these copies, the cell inserts one of them into the gap, instead of the sequence copied from the companion chromosome. The result is an “edited” gene!

The future of CRSPR research is exciting – but also a little scary. In 2015 Chinese researchers, following up on the work with monkeys, attempted to make inheritable DNA changes in human embryos. While unsuccessful, this alarming attempt emphasizes the need for caution as the use of the CRISPR tool becomes widespread. Dr Doudna and other researchers have called for a moratorium on attempts to create altered human babies. What do you think?