Health officials the world over have been sitting on a time bomb that appears about to explode. Infectious diseases are becoming resistant to the antibiotics which since the 1940s have largely held them in check. The potential suffering of becoming once again vulnerable to infectious disease is beyond calculation.

Mycobacterium tuberculosis causes tuberculosis. TB is the leading infectious cause of death among adults worldwide. It killed over 2 million people last year. In this country TB has virtually been eliminated by the widespread use of two effective antibiotics. Now strains resistant to these and all other antibiotics are popping up in countries all over the world. The World Health Organization declared TB a global emergency in 1993. Since then, antibiotic-resistant TB has been reported in 104 countries. In eight of these countries, at least 5% of TB cases are totally drug resistant.

Why is resistance to antibiotics becoming more common? Bacteria become bulletproof to vancomycin, penicillin, and other antibiotics by acquiring genes for proteins that either destroy the antibiotic molecule or expel it from the cell. These resistance genes arise spontaneously as the result of very rare random mistakes in DNA copying called mutations. However, even very rare events like this happen often when infections involve billions upon billions of cells. Once it appears, the genes can be transferred to other cells, spreading the resistance..

Now the stage is set. Any use of the antibiotic will inevitably favor bacteria carrying the resistance gene. When the drug is given, the most susceptible bacteria die, while cells with some resistance survive, especially if too little drug is given to overwhelm them. Facing reduced competition, these cells thrive, able to grow and divide while the antibiotic kills off their competitors.

People who take antibiotics because they have a cold speed the production of resistant bacterial strains. Antibiotics are of no use in fighting colds, because colds are caused by viruses, not bacteria. Also, people often fail to finish the full course of an antibiotic prescription, stockpiling the leftover doses to medicate themselves later in small amounts. Both behaviors, by favoring resistant cells while failing to eliminate the disease completely, encourage growth of more resistant strains.

Faced with these discouraging developments, it is with understandable excitement that drug developers are beginning to evaluate an alternative to antibiotics, not a drug, or indeed a chemical at all, but a virus. 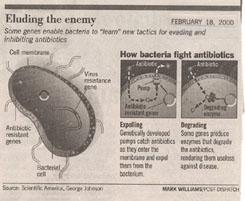 Biologists have long known about viruses that ignore human cells but attack and kill bacteria. Less than 1/40 the size of a bacterial cell, bacteriophages (Greek for “bacteria eaters”) attach to the bacterial surface and squirt their DNA into the cell. There the DNA directs the production of new viruses that eventually rupture the cell, releasing some 4000 new viruses that hungrily seek fresh bacteria to attack.

Fighting disease with phage is difficult. For one thing, you have to get the right phage. Each kind of bacteria is attacked by its own clan of viruses, all exquisitely matched to that one host. In addition, you must purify the virus before you use it in therapy, lest the remnants of past hosts make the patient sick.

Despite these difficulties, phage have been used in Soviet Russia to combat bacterial disease for over 70 years. Russian doctors treat bandages with a cocktail of different phages to combat staph and other infections. They treat hospital staph infections intravenously with a phage that specifically attacks staphylococcus aureus.

Bolstered by the indication from Russian experience that the approach may work, three different U.S. companies in the United States are vying to be the first to get FDA approval to rigorously test phage therapy. The key remaining problem, never addressed by the Russians, is that a patient’s immune system treats phage as foreign bodies and tries to eliminate them. This reduces the time phage can act, and so tends to short-circuit the therapy. Using genetic engineering techniques, researchers are altering the phage surface to seem less foreign to the human immune system. These gene-modified phage last thousands of times longer.

Perhaps most important of all, phages evolve just as bacteria do. The same forces that select for resistant bacteria also select for viruses that overcome that resistance. Finally we may have a therapy with some real staying power in the war against infectious disease.