On Halloween we should be grateful for our night-flying friends, not scared of them.

This Sunday is Halloween, a major holiday in our family. My three girls will dress in costumes that amuse and delight rather than scare, and collect more candy than is good for them. But when they come home that night, they will look carefully over their shoulders, for my house is haunted by bats.

We have a large backyard, and when we first moved in a few years ago my family marvelled at the darting shadows swooping after insects on a hot summer evening in the dusk. Swallows, we thought. Then it dawned on my daughter Suzanne: “Bats!”

Its easy for a child to be scared of bats. The Halloween image of black wings and fangs that glow in the dark paints a picture of danger any kid can understand. Vampire bats are as much a part of childhood culture as cowboys. Buffy the Vampire Slayer is my daughter Suzanne’s favorite TV show.

How in the face of all this negative press do I tell Suzanne that she’s got it wrong, that bats are her friends, harmless and useful, one of nature’s most delightful creations?

When Suzanne thinks of a bat, she sees in her mind something about a foot long, with black body and long white fangs. In fact, there are lots of different kinds of bats. Some are a little larger than a bumblebee. Others, called “flying foxes,” are as big as a cat and have a wing span of nearly a meter. There are over a thousand species of bats, a quarter of all kinds of living mammals.

Only three species of Desmodus bat actually sucks blood, and these so-called vampire bats occur only in Central and South America. A small reddish-brown animal about three inches long, they attack horses and cattle, but almost never people. The nearest Desmodus is about two thousand miles away from St. Louis. Nevertheless, my daughter looks over her shoulder at night, believing as many people do that vampire bats are common, attack people, become entangled in their hair, and spread rabies.

What’s an American bat really like? For one thing, they are great fliers. Bats are the only mammals capable of powered flight. Like the wings of birds, bat wings are actually modified hands. The bat wing is a leathery membrane of skin stretched over the bones of four fingers.

There are more bats than any other kind of mammal but rodents. Bats have been a particularly successful group because they have been able to utilize a food resource that no other mammal or bird has access to — night-flying insects.

How do bats chase and catch flying insects in pitch black darkness? Late in the eighteenth century, the Italian biologist Lazzaro Spallanzani showed that a blinded bat could fly without crashing into things, and still capture insects too. Clearly a sense other than vision was enabling bats to navigate in the dark. When Spallanzani plugged the ears of a bat, however, it was unable to navigate and collided with trees and other objects. Spallanzani concluded that bats “hear” their way through the darkness. 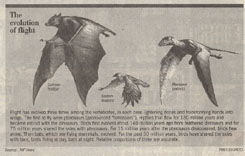 We now know that Spallanzani was right. Bats navigate with a sonar system that functions much like the sonar devices that ships and submarines use to locate underwater objects. As a bat flies, it emits a very rapid series of extremely high-pitched “clicking” sounds through its mouth or nose. The high frequency pulses are well above the range of human hearing. The sounds reflect off obstacles or flying insects, and the bat hears the echo. From the pattern of the echo, a bat can determine not only the direction of an object but also the distance to the object.

Far from being a danger to us, bats are our friends on this earth. Bats play key ecological roles in eliminating insect pests. Individual bats catch hundreds of insects each hour. Large colonies eat tons each night. For example, every night some 20 million Mexican free-tailed bats fly out of Bracken Cave near San Antonio, Texas, the largest known bat cave in the country. They eat more than 110 tons of insects before their return to the cave at dawn.

Our fear and ignorance of this useful nighttime neighbor, our Halloween vampire bat fantasy, unfortunately has a very real consequence. Widescale poisoning of bats is common, since they are unwelcome in many communities. Their cave habitats are often disturbed by people that build fires in them, causing thousands of bats to suffocate and the rest to flee these natural refuges. Increased sealing of abandoned mines has doomed many other colonies.

So this Halloween, around my house, I tip my hat to my night flying friends. My daughters, however, still look over their shoulders. Fantasy has a far stronger grip than the ramblings of a batty old biology professor.