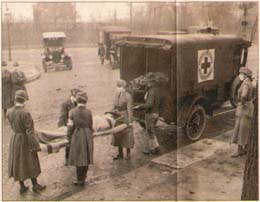 In the photo, members of the American Red Cross are removing two Spanish influenza victims from a home in Saint Louis in November, 1918.  Both are dead.  Some 675,000 other Americans died of flu within 18 months, the last months of the First World War.  The trouble had started  that spring, in early March , when private Albert Gitchell, a mess cook at Fort Riley, Kansas, became ill with chills and a fever.  By week’s end, 522 other soldiers came down with the “croup.” Most recovered, and in the fall the troops were sent to Europe.  There the disease spread with blinding speed, only symptoms were much more severe. Lungs became severely inflammed, and many patient died.  In months all of Europe was affected, and flu had spread to North and South America and Asia.  In Europe, 22 million died, 8 million in Spain alone (hence the name “Spanish flu”).  Even more, 12 million, died in India.  Worldwide, one in four humans became infected, and about 2% of them diedover 50 million fatalities.

Doctors understood in 1918 that Spanish flu was caused by a tiny very infectous disease agent that passed in tiny water droplets exhaled by an infected person and inhaled by another, but knew little else.  The nature of viruses (nucleic acid wrapped in a protein coat) wasn’t discovered until they were isolated in 1933.  Influenza virus, like the AIDS virus that arose late in the twentieth century, contains RNA in its core, and infect only certain species of animals.  While the AIDS virus is a monkey virus that has spread to humans, the Spanish flu virus is basically a bird virus, common in Asian ducks and chickens, that had passed to humans.  In both instances, the transfer to humans has met  with disasterous results.

An individual flu virus resembles a sphere studded with spikes composed of two kinds of protein. Different strains of flu virus, called subtypes, differ in their protein spikes. One of these proteins, hemagglutinin (H) aids the virus in gaining access to the cell interior. The other, neuraminidase (N), helps the daughter virus break free of the host cell once virus replication has been completed.  Copying errors during viral RNA replication cause changes in these spike proteins in 1 of 100,000 viruses during the course of each generation, a very high mistake rate. This high variability hinders our ability to make effective vaccines. Vaccines are treatments designed to induce our bodies to produce antibodies directed against a particularly-shaped protein.  Thus innoculating children with dead chicken pox virus causes them to produce antibodies directed against chicken pox virus, rendering them immune from infection.

Makin a flu virus vaccine did not turn out to be so easy, however.  Because of accumulating changes in the H and N molecules, different flu vaccines must be manufactured to protect against different virus subtypes. Flu viruses are currently classified into 13 distinct H subtypes and 9 distinct N subtypes, each of which requires a different vaccine to protect against infection. Thus, the virus that caused the Hong Kong flu epidemic of 1968 has type 3 H molecules and type 2 N molecules, and is called H3N2.

Major flu pandemics (that is, worldwide epidemics) have been caused in the twentieth century by shifts in flu virus H-N combinations. The Spanish killer flu of 1918, H1N1, thought to have passed directly from birds to humans, killed some 50 million people worldwide. The Asian flu of 1957, H2N2, killed over 100,000 Americans. The Hong Kong flu of 1968, H3N2, infected 50 million people in the United States alone, of which 70,000 died. This strain still kills some 36,000 Americans yearly.

It is no accident that new strains of flu usually originate in the Far East. The most common hosts of influenza virus are ducks, chickens, and pigs, which in Asia often live in close proximity to each other and to humans. Pigs are subject to infection by both bird and human strains of the virus, and individual animals are often simultaneously infected with multiple strains. This creates conditions favoring genetic recombination between strains, sometimes putting together novel combinations of H and N spikes unrecognizable by human immune defenses specific for the old configuration. The Hong Kong flu, for example, arose from recombination between H3N8 from ducks and H2N2 from humans. The new strain of influenza, in this case H3N2, then passed back to humans, creating an epidemic — the human population had never experienced that H-N combination before.

A potentially deadly new strain of flu virus emerged in Hong Kong in 1997, H5N1. Like the 1918 pandemic strain, H5N1 passes to humans directly from infected birds, usually chickens or ducks. More than 200 million poultry have died. Fortunately, the H5N1 strain of flu virus does not spread easily from person to person, and the number of human infections remains small.  Unfortunately, the H5N1 strain is particularly deadly. Of 232 individuals infected by handling birds by the summer of 2006, 134 died of the infection, a frighteningly high mortality of 58%.  For comparison, the mortality of the 1918 Spanish killer flu was 2%. 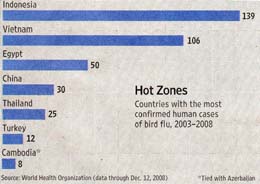 In the eleven years since its appearance,  H5N1-infected migratory birds have made their way from Asia to Africa and Europe, but have not yet reached North America.  All human H5N1 bird flu fatalities have been restricted to people directly handling infected birds.  With the arrival of winter this year, H5N1 avian flu is again on the rise in Asia and Europe., as illustrated in the figure.   Authorities in India’s north-eastern Assam state announced last week that they will cull 200,000 chickens after a fresh outbreak there. Last Tuesday Hong Kong culled 80,000 birds after another outbreak.  These recent outbreaks are part of an annual trend, with cases peaking from December to March each year in birds as well as humans.

Only 30 deaths have been confirmed by the the World Health Organization this year, well below last year’s 59 and the peak of 79 recorded the year before that in 2006.  As these words are written, poultry outbreaks appear to be increasing rapidly. New outbreaks have been reported recently in Cambodia, eastern China, Bangladesh and West Bengal, as well as the ones mentioned in Assam and Hong Kong.  In past years, when poultry outbreaks rise, an increase in human cases has usually followed.

H5N1 certainly meets the first two conditions.  It is both novel and deadly. What is the risk that future changes in the bird flu virus will fulfill the third condition, and ignite a worldwide pandemic?

Might such changes happen by random mutation of H5N1 genes?  To see, scientists recovered the H1N1 Spanish flu virus from victims buried in frozen tundra, determined its nucleotide sequence, and compared it to the sequence of  H5N1 bird flu.  It seems that at least ten mutations played a key role in the emergence of the Spanish flu, of which two are also seen in H5N1. One of the two changes is in the polymerase gene, allowing the virus to survive in cooler nasal regions; the other change, in the H gene, targets cell surface receptors in nose and throat rather than lungs. Both changes aid in droplet spreading.  Other mutations would also be required, however, to enable H5N1 to pass readily from one individual to another.

Another way for H5N1 to gain the ability to pass freely among people would be by recombination. The figure illustrates two ways in which this might occur. How dangerous is this possibility? The flu virus RNA contains eight gene segments encoding 11 proteins, suggesting 254 possible new combinations of H5N1 bird flu with H3N2 human flu (the strain that causes most seasonal flu outbreaks worldwide today).  Creating combinations in the laboratory and testing them, first reports are encouraging: the new combinations thought most likely to improve transmission don’t.  While that still leaves hundreds of  other combinations to be tested, this is good news.

This problem isn’t going to go away anytime soon. Worldwide bird flu surveillance continues, as do attempts to develop both effective vaccines and anti-viral drugs.  Several human vaccines for bird flu have been developed, including ones made by Sanofl-Aventis and by GlaxoSmithKline, but their effectiveness is still untested.  The key need, of course, is for a more precise vaccine that targets the bird flu strain that becomes transmissible between humans.  It is anticipated that such a vaccine would take more than six months, a scary prospect given how many people died of the much less lethal Spanish flu over that time period.

In the meantime, public health officials monitor flu cases in Asia and Africa carefully, watching for family clusters of bird flu, a tell tale sign of person-to-person spread of the bird flu virus. Its important that we not relax simply because bird flu is “old news.”  If the change we fear occurs, it will be “new” news soon enough. 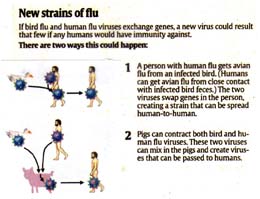