Last week, on June XX, 2008, Tim Russert died of a massive heart attack. Moderator of NBCs influential Meet the Press, he had seemed in perfect health, and had no apparant risk factors, a healthy individual who was a nonsmoker, exercised regularly, ate a healthy dietand drops dead of a heart attack. This story is repeated all too often. An athlete, business person, or young person dies unexpectedly of a heart attack. Just today it was comedian George Carlin. One cannot help but wonder if we ourselves might also be at risk. If heart attack cannot be predicted, how can anyone feel safe?

One well-understood risk factor for heart disease is a diet high in cholesterol. Why is cholesterol important? The heart is the organ that pumps blood throughout the body through blood vessels, and these blood vessels can become clogged with fatty deposits that slow and sometimes stop the flow of blood. The photos show two blood vessels. On the left is a healthy cornary artery, a major vessel carrying blood to the muscles of the heart. The photo on the right shows a cornary artery whose interior wall is coated with a thick layer of yellowish cholesterol. Blood flow through this artery is reduced. A heart attack occurs when the supply of blood that travels through cornary artery to the heart is cut off completely. Deprived of blood circulation for more than a few minutes, muscle cells of the heart begin to die; if enough cells die, the heart stops beating and death quickly follows.

Because it is a simple matter to measure the cholesterol levels in a person’s blood, many people at risk of heart attack can be identified and steps taken to reduce their cholesterol levels. However, this doesn’t mean that a person with low cholesterol is safe. Heart attacks kill more than 500,000 people in the United States each year, and fully half of these people have normal cholesterol levels. There must be more to the story.

There is. Doctors have identified other risk factors, among them are smoking, high blood pressure, family history, obesity, physical inactivity, and age. However, this means that many people who appear healthy are actually at risk, and don’t have a clue that they are in peril. Researchers have searched for a reliable indicator of this risk and may have found one in a molecule called C-reactive protein (CRP).

CRP is a molecule associated with the inflammation response in the body. Inflammation is one of the ways your body fights infection and reairs damage. In response to invasion of the body by microorganism or damage to tissues, your body’s immune system sends an army of defensive white blood cells to the threatened area. There these cells release a barrage of chemicals to fight the infection, one of the chemicals being CRP.

What has this got to do with heart attacks? Researchers have long suspected that inflammation may play an important role in the events leading up to a heart attack, and were able to demonstrate that C-reactive protein is present in the hearts of heart attack victims. Harvard cardiologist Paul Ridker and coworkers took this line of conjecture one step further and started looking at CRP as an indicator of cardiovascular disease in seemingly healthy people. They found, in both men and women, that those with elevated CRP levels were two to three times more likely to suffer from a heart attack or stroke. The men’s study showed that inflammation, indicated by elevated levels of CRP, was present five to ten years in advance of a heart attack. The women’s study showed that CRP was actually a better indicator than cholesterol in predicting cardiovascular disease. 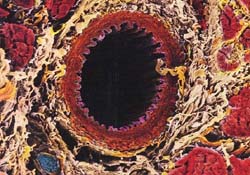 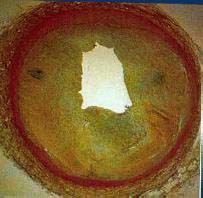 These studies lend credence to the emerging view that chronic inflammation plays a key role in cardiovascular disease. CRP is released by the liver in response to acute infections and is a key player in the body’s attempt to fight the infection. The inflammatory response is also triggered as a result of tissue damage. Doctors have know for quite sometime that CRP levels are elevated following a heart attack because the body is trying to repair damaged heart muscle cells. These new studies, however, indicate that the inflammatory response is triggered much earlier, when cells that line blood vessels release CRP as the fatty deposits are first accummulating. The triggering of the inflammatory response, a process that is suppose to help the body, might actually make matters worse in the heart because the white blood cells that migrate to the site might also contribute to the fatty deposits in the blood vessels. In fact, the inflammation might also contribute to the actual heart attack or stroke by weakening the fatty plaques, causing them to rupture. Small fragments of the plaque then become lodged in smaller blood vessels of the heart or brain causing heart attack or stroke.

The mounting body of evidence seems to support the view that inflammation is an integral part of cardiovascular disease, and suggests that CRP may be a reliable early indicator of the presence of dangerous inflammation in the heart. Given this, why isn’t CRP testing more widespread? A simple blood test, it would seem feasible to have tested Tim Russert for CRP when testing for cholesterol.
There are several reasons why a CPR test isn’t routinely requested. First, although these studies indicate an elevated level of CRP is related to cardiovascular disease, CRP levels are also elevated as a result of various types of infections. CRP is a general inflammation indicator and not specific to cardiovascular disease. Second, while CRP may indicate a risk of cardiovascular disease, there is little clear evidence showing that reducing inflammation improves cardiovascular health. Aspirin has been shown to improve heart health in certain situations,but it is not clear that it is the anti-inflammatory aspect of aspirin at work. Third, if CRP levels are found to be high, there isn’t clear data on how to treat the condition. Statins are used to treat high cholesterol but there is no clear evidence yet that these are also effective in lowering CRP levels or reducing inflammation. Fourth, a new study released at the end of 2006 hints that CRP may not be the magic blood test that we had hoped for. While a helpful early warning for some patients, it misses other patients at risk.

Overall, the CRP test, like cholesterol tests, succeeds in predicting some of those who will suffer a heart attack, but not all. One more weapon in the battle against heart disease, inflammation biomarkers like CRP may prove to be most helpful in identifying high risk among some of those patients who seem to be at only a moderate level of risk based on more conventional screening procedures. But there are no guarentees. CRP levels were not high for Tim Russert. For him, and for a lot of us, there just isn’t going to be any warning.