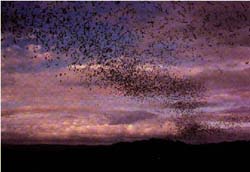 The hallmark of humanity’s new century is uncertainty. Our future is haunted by the threats of global warming, bird flu, and ailments like diabetes that never used to be such a problem. This week we learn that we are not alone in facing an uncertain future. Bats are dying. A plague has killed tens of thousands of bats in the Northeastern states this spring. The cause of “white nose syndrome,” named for a white fungus that appears on bats’ noses and wings, is a mystery to biologists. White nose syndrome was first spotted in four New York state caves in 1997, where some eleven thousand bats died. In the following decade infected bats, which can travel hundreds of miles in the summer, have spread the disease to 24 caves in five states, killing 90% of the bats in some of them. Researchers expect bat caves in Pennsylvania to be next in line as the outbreak continues to spread.

Why should we care? Birds and bats are the only living vertebrates that fly. Birds own the skies during the day, and bats rule the night. However, while people love birds, many recoil at the thought of bats. As a kid, you were probably warned to cover your head at night if bats were flying around. Bats, it was thought, were essentially blind and would swoop down and get tangled up in your hair. Bats have been characterized as dirty, blood-sucking, rabies-carrying flying rodentsno wonder people are afraid of them!

You needn’t be. Bats are not rodents, but rather are in an entirely different order, Chiroptera. Nor are bats filthythey groom themselves constantly when not sleeping or feeding. It is true that bats, like dogs and many other mammals, can carry rabies, but a bat is no more likely to have rabies than the raccoon that might invade your garbage cans at night. Bats are not blind, either, despite the saying “blind as a bat.” Bats actually have better eyesight than most people  one species in the U.S. has been found to have eyesight on par with military night-vision scopes. Good eyesight, along with an echolocation system that uses sound waves to track down flying insects in the dark, make it highly unlikely that a bat would ever get trapped in your hair. In fact, their echolocation system can detect an object as thin as a human hair, so they can easily see a head full of it.

Because of their bad reputation, there is little sympathy to protect and save bats, 50% of which are either threatened or endangered. There are two primary reasons why bats are vunerable and struggling to survive worldwide. The mothers produce only one offspring, called a “pup,” each year. With such low birthrates, populations can’t bounce back quickly from losses. Also, bats tend to live in huge colonies and so the destruction of a habitat can jeopardize thousands of bats.

There are lots of kinds of bats, over 1,000 species, one quarter of all the kinds of living mammals. Despite this great diversity, there is little danger you will encounter a vampire bat that would suck your blood. Fully 70% of bats are insect eaters, and most of the remaining species feed on fruit and nectar. Only three species of bat, found in far-away Central and South America, are vampire bats, feeding on blood from mammals.

Nor need you fear them. Vampire bats, made famous by horror movies, are not the blood-sucking predators that they are made out to be in the movies. They feed on large birds, cattle, and other large animals, and in only a few instances have human bites been verified. They don’t bite and drain the blood from their victims, but rather with their sharp teeth, they make small cuts in their prey as it sleeps and lap up blood as it oozes out of the cutusually less than two tablespoons worth. Their saliva contains a chemical that acts as a local anesthetic, numbing the area of the bite to keep the animal from waking up as they feed and a second chemical that keeps the blood from clotting. Scientists are studying this anticlotting chemical as it is more effective than any medicine currently used as anticoagulants. One day the vampire bat might help heart attack and stroke victims. 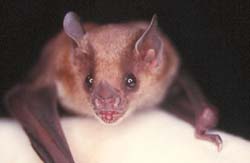 Bats are mostly nocturnal, and relatively difficult to study for that reason. They play key ecological roles in eliminating insect pests, pollinating flowers, and dispersing seeds. They are the only flying mammals and range in size from a few that are little larger than a bumblebee to some of the “flying foxes” with wingspans of nearly six feet. They are the only consistent predators of nocturnal flying insects, playing a major role in controlling insect pests. For example, every night, Mexican free-tailed bats (Tadarida brasiliensis) emerge by the millions from Bracken Cave in west Texas, as shown in the photo. Huge columns of bats can be seen for kilometers and may climb more than 3000 meters above the ground. The estimated 20 million bats that inhabit this one cave cover thousands of square kilometers nightly and will eat more than 200 tons of insects before they return to the cave at dawn. A single common brown bat of North America can eat over 1000 mosquitoes in an hour. Bats that feed on insect save farmers millions of dollars by protecting crops from predatory insects and reducing the need for pesticide controls, but their value as pest controllers is only now being appreciated. One bat can eat more than a pound of nighttime insects in a week. Pear farmers in California found that their crop losses due to corn-ear moths were reduced to less than 5% when a bat colony that feeds on the moths was placed within two kilometers away, but when the bats were farther away, more than four km, the losses were closer to 60%.

In addition to helping control night-flying insects, the guano of bats deposited in large amounts in bat caves is collected and used as some of the world’s best natural fertilizer. Many tropical plants, especially those in the rainforests, depend on bats for pollination, and open their flowers in the evening to accommodate their nighttime visitors. The agave plant of the southwest U.S., which is used to make tequila, is also pollinated by bats.

As the benefits of these misunderstood animals are becoming clearer, we are gaining a greater appreciation of these stealthy, nighttime hunters. Many communities are acting to preserve bat habitats. Bats typically live in large colonies, usually in caves, and so protecting the land surrounding the caves and the caves themselves from development takes us a long way in preserving bat habitats.

So how do we help bats deal with the outbreak of white nose syndrome? The first step is to get a better grasp of the nature of the problem. What kills the bats? Oddly enough, many seem to have starved to death. The six species of Northeast bat affected by white nose syndrome all hibernate, sleeping through the cold months of winter by lowering their metabolisms to conserve energy. The little brown bat found in the U.S. reduces its heart rate to 20 beats per minute, down from a flying heart rate of 1,000 beats per minute, and it can stop breathing for 48 minutes at a time when hibernating. If the bats are awakened during hibernation, they use up precious energy stores. They will starve if disturbed several times during hibernation. If they leave the caves too early to seek food, they freeze to death. Starved and frozen bats are the hallmark of the white nose syndome outbreak. It seems that whatever fungus or parasite is responsible for white nose syndrome is killing infected bats by waking them up. Researchers gathered at a white nose syndrome last month in Albany NY had lots of suggestions about what might be going on — a new cold-tolerant fungus or parasite, or environmental disturbances from farming or development — but no clear answers. Death stalks our nation’s bats, and we do not yet know its name.