We Americans love to eat, but on June 24, 2008 the Centers for Disease Control and Prevention released a report warning we are eating ourselves into a diabetes epidemic. Diabetes affected 7 million Americans in 1991. By mid-2008, the number was 24 million, more than 8% of all Americans, an alarming increase, with 3 million new cases in just the last 2 1/2 years!  25 million more Americans are reported to be pre-diabetic, with blood sugar levels high enough to indicate they are well on their way to becoming diabetic.  In 2002, I myself was diagnosed as pre-diabetic; by 2005 I had become a full fledged diabetic.  As you can imagine, this diabetes epidemic is a subject in which I have a real and personal interest.

We American diabetics are not alone. The same explosion of diabetes is being seen worldwide. Diabetes now effects 246 million people, and kills 3.8 million each year. Every ten seconds one person dies of diabetes. In the same ten seconds two more people develop the disease.

Diabetes is a disorder in which the body’s cells fail to take up glucose from the blood. Tissues waste away as glucose-starved cells are forced to consume their own proteins. Diabetes is the leading cause of kidney failure, blindness, and amputation in adults. Almost all the increase in diabetes in the last decade, myself included, is in the 85% of diabetics who suffer from type II, or “adult-onset,” diabetes.  I and these other individuals lack the ability to use the hormone insulin.

Your body manufactures insulin after a meal as a way to alert cells that higher levels of glucose are coming soon. The insulin signal attaches to special receptors on the cell surfaces, which respond by causing the cell to turn on its glucose-transporting machinery. Individuals like me who suffer from type II diabetes have normal or even elevated levels of insulin in their blood, and normal insulin receptors, but for some reason the binding of insulin to their cell receptors does not turn on the glucose-transporting machinery like it is supposed to do. For 30 years researchers have been trying to figure out why not.

How does insulin act to turn on a normal cell’s glucose transporting machinery? Proteins called IRS proteins (the names refer not to tax collectors, but to insulin receptor substrate) snuggle up against the insulin receptor inside the cell. When insulin attaches to the receptor protein, the receptor responds by adding a phosphate group onto the IRS molecules. Like being touched by a red-hot poker, this galvanizes the IRS molecules into action. Dashing about, they activate a variety of processes, including an enzyme that turns on the glucose-transporting machinery.

This suggests that in type II diabetes something is interfering with the action of the IRS proteins. What might it be?  An estimated 80% of those who develop type II diabetes are obese, a tantalizing clue.  Look at the graph. Over the same 15 years that diabetes has undergone its explosive increase, the obesity rate increased from 12% of the U.S. population to over 38%.

What is the link between diabetes and obesity? Recent research suggests an answer to this key question. A team of scientists at the University of Pennsylvania School of Medicine had been investigating why a class of drugs called thiazolidinediones (TZDs) helped combat diabetes. They found that TZDs cause the body’s cells to use insulin more effectively, and this suggested to them that the TZD drug might be targeting a hormone.

The researchers set out in 2001 to see if they could find such a hormone in mice. In search of a clue, they started by looking to see which mouse genes were activated or deactivated by TZD. Several were. Examining them, they were able to zero in on the hormone they sought. Dubbed resistin, the hormone is produced by fat cells and prompts tissues to resist insulin. The same resistin gene is present in humans too. The researchers speculate that resistin may have evolved to help the body deal with periods of famine. 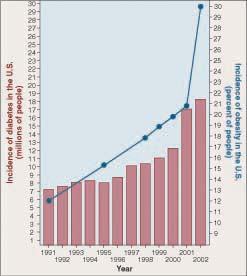 Mice given resistin by the researchers lost much of their ability to take up blood sugar. When given a drug that lowers resistin levels, these mice recovered the lost glucose-transporting ability.

Researchers don’t yet know how resistin acts to lower insulin sensitivity, although blocking the action of IRS proteins seems a likely possibility.

Importantly, dramatically high levels of the hormone were found in mice obese from overeating. Finding this sort of result is like ringing a dinner bell to diabetes researchers. If obesity is causing high resistin levels in humans, leading to type II diabetes, then resistin-lowering drugs might offer a diabetes cure!

These initial reports were followed by others, some confirming the finding that obese mice have elevated levels of resistin, others failing to see any elevation of resistin in obese animals. Now, over six years after the initial discovery of resistin, we know a good deal more, although the picture remains a bit murky.

In both laboratory mice and rats, it is now very clear that resistin does block the action of insulin, as the initial report had claimed: Administration of insulin causes the liver to become less sensitive to insulin’s command that the liver stop releasing glucose into the bloodstream between meals.

There are still a lot of potential objections that need evaluation.  Could this effect be only temporary?  No.  The effect continues in mice genetically modified so they produce more resistin than they would normally.  Could the effect reflect the very high doses of resistin that were used?  Lots of things can interfere with insulin’s activity if added at high enough levels.  No.  Using genetic tricks, researchers have reduced or eliminated resistin levels in lab mice, and in these cases fasting blood sugar levels went down, the livers of the mice being better able to respond to insulin.

On balance, the weight of evidence supports the initial report.  However, there are still questions that need answers before we can accept the report’s suggestion that resistin is the long-sought link between obesity and type II diabetes.  For example, in mice resistin is manufactured in fat tissue.  In humans, by contrast, resistin is made in white blood cells (the ones called macrophages).  While macrophages tend to accumulate in the fat tissues of obese people, this differences does suggest that the effect we see in mice may not be the same in humans.

On the scent of something important, resistin researchers are now shifting their efforts from mice to humans. Much needs to be checked, as there are no guarantees that what works in a mouse will do so in the same way in a human. Still, the excitement is tangible.

Portions of this article were developed from a column I wrote for the St. Louis Post Dispatch in February of 2001.