The world was riveted last week by the announcement that an obscure Scottish scientist had succeeded in cloning a sheep — in taking cells from an adult sheep and using them to make another sheep. While much of the press coverage focused on the potential of cloning humans using this approach, the immediate scientific impact is in genetic engineering, where this success removes a key barrier to feasibly manipulating the genes of farm animals.

For several years biologists have been able to engineer desirable traits into cows, sheep, and other farm animals, by microinjecting DNA into fertilized eggs. The resulting transgenic animals incorporate the added gene into their chromosomes. For example, transgenic sheep have recently been genetically engineered to secrete into their milk a protein called alpha-1 antitrypsin, which attacks the enzyme elastase and so may be helpful in relieving the symptoms of cystic fibrosis. Similarly, special transgenic goats have been engineered to produce human antithrombin III, a protein that controls blood clotting, and transgenic cows add nutritious human lactalbumin in their milk.

The difficulty in using transgenic animals to improve agriculture and medicine is getting enough animals. Breeding produces offspring only slowly. Ideally one would like to xerox many exact genetic copies of the transgenic individual — but until last week it was commonly accepted that adult animals could not be cloned. Now the holy grail of agricultural genetic engineers seems within easy reach.

The idea of cloning animals was first suggested in 1938 by the German embryologist Hans Spemann (often called the father of modern embryology) who proposed what he called a fantastical experiment: remove the nucleus (the organelle in the cell that contains the DNA, the genetic instructions for making more cells) from an egg cell, and put in its place a nucleus from another cell.

It was 14 years before technology advanced far enough for anyone to take up Spemanns challenge. In 1952 two American scientists, Robert Briggs and T.J. King, used very fine pipettes (hollow glass tubes) to suck the nucleus out of a frog egg (they chose frogs because frog eggs are unusually large, making the experiment feasible), and replace it with a nucleus sucked from a body cell of an adult frog. The experiment did not work when done this way, but partial success was achieved 18 years later by the British developmental biologist John Gurdon. In 1970 he repeated the experiment, but inserted nuclei from advanced toad embryos rather than from adult tissue. The toad eggs developed into tadpoles — but died before becoming adults.

The Path to Success

For 24 years nuclear transplant experiments were attempted without success. Technology continued to advance however, until finally in 1984 Steen Willadsen, a Danish embryologist working in Texas, succeeded in cloning a sheep using a nucleus from a cell of an early embryo. The key to his success was in picking a cell very early in development. This exciting result was soon replicated by others in a host of other organisms, including cattle, pigs, and monkeys.

Only early embryo cells seemed to work, however. Researchers became convinced, after many attempts to transfer older nuclei, that animal cells become irreversibly committed after the first few cell divisions of the developing embryo. Past this point, nuclei from differentiated animal cells cannot be successfully incorporated into egg cells and used to clone entire organisms.

We now know this conclusion to have been unwarranted. The key advance for unraveling this puzzle was made in Scotland by geneticist Keith Campbell, a specialist in studying the cell cycle of agricultural animals, the cycle of cell division, growth of the daughter cells, their division, and so on. By the early 1990s knowledge of how the cell growth and division cycle is controlled, advanced by cancer research, had led to an understanding that cells dont divide until conditions are appropriate Just as a washing machine checks that the water has completely emptied before initiating the spin cycle, so the cell checks that everything needed is on hand before initiating cell division. Campbell reasoned Maybe the egg and the donated nucleus need to be at the same stage in the cell cycle.

This proved to be a key insight. In 1994 researcher Neil First, and in 1995 Campbell himself working with Scottish reproductive biologist Ian Wilmut, succeeded in cloning farm animals from advanced embryos by first starving the cells, so that they paused at the beginning of the cell cycle. Cancer biologists call this temporary staging point the G1 checkpoint. Two starved cells are thus synchronized at the same point in the cell cycle. The stage was now set for success.

Wilmut then attempted the key breakthrough, the experiment that had eluded researchers since Spemann proposed it fifty nine years ago. He set out to transfer the nucleus from an adult differentiated cell into an enucleated egg, allow the resulting embryo to grow and develop in a surrogate mother, and hopefully produce a healthy animal. 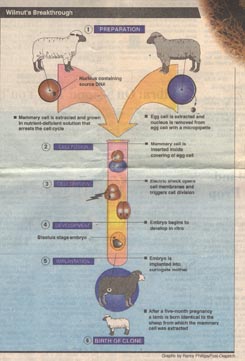 Wilmut removed mammary cells from the udder of a six year old sheep. The origin of these cells gave the clone its name, Dolly, after the country singer Dolly Parton. The cells were grown in tissue culture. Some of them were frozen so that in the future it would be possible with genetic fingerprinting to prove that a clone was indeed genetically identical with the cells from the six year old sheep.

In preparation for cloning, Wilmuts team reduced the concentration of serum nutrients on which the sheep mammary cells were subsisting, lowering it substantially for five days. In parallel preparation, eggs obtained from a ewe were enucleated, the nucleus of each egg carefully removed with a micropipette.

Mammary cells and egg cells were then surgically combined in January of 1996, the mammary cells inserted inside the covering around the egg cell. Wilmut then applied a brief electrical shock. A neat trick, this causes the plasma membranes surrounding the two cells to become leaky, so that the nucleus of the mammary cell passes into the egg cell. The shock also kick-starts the cell cycle, causing the cell to begin to divide.

After six days, in 30 of 277 tries, the dividing embryo reached the hollow-ball blastula stage, and 29 of these were transplanted into surrogate mother sheep. A little over five months later, on July 5, 1996, one sheep gave birth to a lamb. This lamb, Dolly, was the first successful clone generated from a differentiated animal cell.

Further Down the Road

Wilmuts successful cloning of fully differentiated sheep cells is a milestone event in gene technology. Even though his procedure proved inefficient (only one of 277 trials succeeded), it established beyond all doubt that cloning of adult animal cells is possible, that with the right techniques it CAN be done. Now the goal of transgenic cloning of animals is within easy reach — an announcement can be expected within the year. Instead of laboriously breeding animals modified to contain particular genes, transgenic animals will now simply be cloned. As future research improves the efficiency of cloning, transgenic cloning will likely become commonplace.

It is impossible not to speculate on the possibility of cloning a human. There is no reason to believe such an experiment would not work, but many reasons to question whether it should be done. As much of Western thought is based on the concept of human individuality, we can expect the possibility of human cloning to engender considerable discussion.

One example leaps to attention. In the flurry of press comment over Wilmuts successful cloning this comment emerged: Well, now we dont need men! Certainly an interesting point of speculation, it proposes that sexual reproduction will not be necessary if human cloning becomes commonplace. However, not only would this not be much fun, it would be suicidal for the human race, as sex reshuffles the genes, producing new combinations that play key roles in disease resistance and many other aspects of survival. Biologist George Williams put it well years ago when he said that reproduction-by-cloning is like xeroxing your lottery ticket — even if you have the winning number, making many copies doesnt help you win again, for the winning number will not be the same the next time.

It seems important not to be overwhelmed by the ethical implications of cloning humans. The ethical dilemmas and risks need to be evaluated, and rational legislation to discourage casual human cloning is certainly desirable. But the enormous potential benefits of cloning transgenic animals should not be ignored. Dolly represents a very real positive step forward in our ability to use science to better our lives, and should be welcomed.