I have often wondered why my parents named me after a dragonslayer. They had selected the family name Sparhawk for me, but when I was born they examined me carefully and instead pronounced “George.” A slender shy boy, I would have loved to have been called “Hawk.” Instead they named me after a saint famous for killing a dragon.

Saint George was born in Israel a few hundred years after the time of Christ, became a soldier in the Roman army, and rose to high rank. The exploit for which he became famous took place in the city of Silene in Lybia. A dragon there had been terrorizing the town, devouring sheep and children. When George arrived on the scene, the King’s daughter was being offered up as sacrifice to the dragon, which George promptly slew with his lance. George himself met a similar fate — his open profession of Christianity led to his arrest and execution in the year A.D. 303 during the prosecution of the Christians by the Roman emperor Diocletian.

George’s slaying of the dragon was one of those events that has become etched in time, never forgotten. Before the end of the millennium George was made a saint by the Catholic church, and In 1349 he was made the patron saint of England.

In recent years, however, Saint George has gone a bit out of fashion. He has even been decannonized, the church apparently feeling George had not been completely truthful about his dragon killing.

Dragons have not fared so well in modern times either. Linnaeus did not include them in his listing of all the kinds of animals, and Darwin ignored them in his accounts of how animal and plant life evolved. I myself grew up to become a biology teacher, and not once to my students do I mention dragons.

This omission has not gone unnoticed. My fourteen year old daughter Caitlin carries my parents’ dragon perception genes in full fire. “How,” she demands, “can you of all people, with the name of George, refuse to recognize the existence of dragons?”

I sputter a few words about Komodo dragons, 10 foot long lizards on the Indonesian island of Komodo that can outrun a deer and kill a water buffalo, but she is not so easily put off.

It’s the fire-breathing kind she means, the kind that roasted Beowulf. Caitlin patiently explains to me how dragons manage the fire-breathing part. It appears they graze on grass like a cow, and like a cow their digestion of plant material generates considerable methane gas as a by-product. In a cow this gas takes the shortest route out, but in a dragon the methane accumulates in the stomach like an expanding balloon. When the dragon wants to burn someone, it lets out a powerful belch, igniting the spurting gas with a spark from its clashing teeth.

A sizable dragon with a gut big enough to digest methane would weigh several tons, I point out, far too heavy to fly. Its wings would have to be a hundred feet long to generate enough lift, and beat as fast as a hummingbirds. 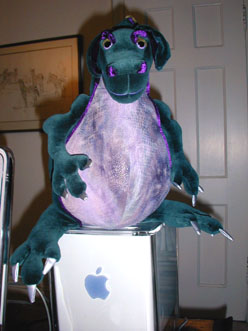 My reasonable objection is dismissed with a casual wave. “Big fire-breathing dragons have four legs and don’t fly. Only little dragons fly,” she explains, pointing out that flying dragons have only two walking legs. Apparently the shoulders of flying dragons have become modified into wings — a not-unreasonable idea, I must admit, as just this sort of evolutionary development is seen in the bird-like dinosaurs recently found in China.

“Where are they now?” I ask my fierce critic. “I haven’t seen any dragons lately.” But I should have known better than to try that argument on a true believer. Dragons fly at night, it appears. That’s also when nearly all UFOs are seen. Most UFOs are reported in the spring and fall. Prehaps that’s the migratory season for North American dragons. If people can believe in UFOs, why not dragons?

Of course, she has a point, although perhaps not the one she intends. Dragons, like UFOs, are a matter of belief. Dragons are real for Caitlin precisely because she believes in them.

I don’t teach dragons in my biology course because science is not about believing. Science is about conditionally accepting ideas that might be true, and then trying to prove they’re wrong. There is no choice in science — what is disproven must be rejected, what has not been disproven cannot be.

Belief, on the other hand, is all about choice. We choose what we believe, and what we don’t. Caitlin’s real point is not that dragons exist, but that they should. Understanding her at last, I went out today to one of the larger toy emporiums and purchased myself a dragon. He sits over my computer as I write this, as real as I can imagine him to be. I have named him Sparhawk.