In the century since he proposed it, Darwin’s theory of evolution by natural selection has become nearly universally accepted by biologists as the best available explanation for biological diversity, its predictions supported by the experiments and observations of generations of scientists. There is ongoing controversy among serious students as to the details of how evolution has occurred, just as there is controversy in every active scientific field. But there is no controversy about Darwin’s basic finding that natural selection has played and is continuing to play the central role in the process of evolution.

In a commentary I wrote last week, I suggested that 140 years without teaching Darwin to our children are enough, that it is high time Missouri schools begin teaching evolution as the core of the science of biology, as practically every nonreligious college and university in the nation does. Numerous readers wrote in raising a variety of objections to Darwin’s theory of evolution. I would like, in this commentary, to respond to the objections they raise. I will confine my response to the scientific issue. A biblical rather than an evolutionary view of creation is a religious belief shared by many Americans, and I do not wish in any way to disparage that belief, but rather to argue, as has the Supreme Court, that the question of whether evolution is to be taught in the nation’s schools should be regarded as a scientific, not a religious matter.

1. Evolution is not solidly demonstrated. “Evolution is just a theory,” several readers point out, as if theory meant lack of knowledge, some kind of guess. Scientists, however, use the word theory in a very different sense than the general public does. To a scientist, theories are the solid ground of science, that of which we are most certain. Few of us doubt the theory of gravity because it is “just a theory.”

2. There are no fossil intermediates.“No one ever saw a fin on the way to becoming a leg,” many readers claim, pointing to the many gaps in the fossil record in Darwin’s day. Since then, however, most fossil intermediates in vertebrate evolution have indeed been found. A clear line of fossils now traces the transition between whales and hoofed mammals, between reptiles and mammals, between dinosaurs and birds, between apes and humans. The fossil record will never be totally complete, but the evidence of evolution between major forms is now quite compelling.

3. The clockmaker argument.“The organs of living creatures are too complex for a random process to have producedthe existence of a clock is evidence of the existence of a clockmaker.” Biologists do not agree. The intermediates in the evolution of the mammalian ear can be seen in fossils, and many intermediate “eyes” are known in various invertebrates. These intermediate forms arose because they have value being able to detect light a little is better than not being able to detect it at all. Complex structures like eyes evolved as a progression of slight improvements. It is only because soft tissues are rarely preserved in fossils that we don’t have an even fuller record.

4. Evolution violates the second law of thermodynamics. “A jumble of soda cans doesn’t by itself jump neatly into a stackthings become more disorganized due to random events, not more organized,” several readers object. Biologists point out that this argument ignores what the second law really says: disorder increases in a closed system, which the earth most certainly is not. Energy continually enters the biosphere from the sun, fueling life and all the processes that organize it. Just as a mother’s energy “organizes” a child’s otherwise messy room, so the sun through photosynthesis powers the organization of life on earth. 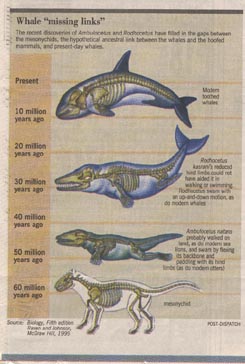 5. Natural selection does not imply evolution. “No scientist has come up with an experiment where fish evolve into frogs and leap away from predators.” Many readers raise this objection. Is microevolution (evolution within a species) the mechanism that has produced macroevolution (evolution among species)? Most biologists that have studied the problem think so. Studies of rapidly-evolving groups like the finches studied by Darwin on the Galapagos Islands, the many species of fruit flies on the Hawaiian Islands, and the innumerable species of tiny cichlid fishes in Africa’s Lake Victoria, all reveal clear evidence of rapid species formation as natural selection molds different populations to different habitats. Only the erasure of extinction remains to leave distinctly different forms for future people to study. Some kinds of animals produced by man-made selection are remarkably distinctive. If future biologists only had chihuahuas, dachsunds, and greyhounds from the fossil record, they would surely consider them to be different species, perhaps even different genera. While all dogs are in fact the same species and can interbreed, laboratory selection experiments easily create forms that cannot interbreed and thus would in nature be considered different species. Thus production of radically different forms has indeed been observed, repeatedly. To object that evolution still does not explain really major differences, like between fish and amphibians, simply takes us back to point 2 these changes take millions of years, and are seen clearly in the fossil record.

Darwin’s theory of evolution is as solidly demonstrated a proposition as science contains, and is accepted by scientists and citizens worldwide. Only in America does the general public still harbor such reservations as these readers have expressed. Their objections reflect a lack of familiarity with the scientific issues raised above, a lack of familiarity that is no surprise, when our schools don’t attempt to teach the matter. The existence of an evolution controversy in Missouri is to me the best evidence of the failure of our schools to do their job. 140 years without Darwin are enough.