Darwin first became convinced that evolution occurs when he collected a variety of small birds on the Galapagos islands off the west coast of South America. All these birds proved to be finches, a cluster of species closely related to one another and all resembling the finches of the South American mainland. The simplest explaination, Darwin thought, was that a single ancestor species of finch had migrated to the islands in the past, flying across the ocean from South America.. This one ancestral species then evolved into the 14 different species found on the islands now. Darwin called this process “descent with modification” and regarded it as key evidence for his theory of evolution by natural selection.

In the 140 years since, scientists have wondered about the identity of this ancestral species. Did it come from South America, as Darwin proposed? The nearest point on the mainland is Ecuador. To reach the Galapagos Islands from there, the ancestor of Darwin’s finches would have had to travel 900 km over the open ocean, a very long migration.

There have been many attempts by scientists to confirm Darwin’s hypothesis. Studies of the birds’ body shape and color are not conclusive, as differences are not distinctive. More recent studies have focused on molecular data. A change in a protein or in DNA is like a unique fingerprint, preserved from one generation to the next.  Looking at these distinctive differences, we should be able to see clearly who is related to who. But what molecular data to use? You can’t study variation among genes affecting proteins, mitochondrial DNA, or nuclear DNA — the 14 Galapagos finch species are so new (less than 3 million years old) that too few protein or DNA differences have accumulated to make a reliable evolutionary tree.

A breakthrough in using molecular data to test the Darwin’s proposal has been achieved this year by examining variation in the length of microsatellite DNA sequences. Microsatellites are highly-repeated gene sequences of a few thousand bases. Thousands of copies of them are scattered about the chromosomes more or less at random. Microsatellite sequences have very high mutation rates, and so are often used in DNA tests of paternity or for forensic identification, as in the O J Simpson murder trial. Because of these very high mutation rates, microsatellites would seem to be an ideal way to compare clusters of recently-formed species such as Darwin’s finches, as many DNA differences can be expected to have accumulated even over a relatively short span of time. Evolutionary ecologist Ken Petren, with Peter and Rosemary Grant of Princeton University, have examined 16 microsatellite markers on genomic DNA drawn from the bird’s blood. The markers show variation on exactly the correct time scale to distinguish between the species.

What the molecular tree tells us

The evolutionary tree they obtained based on microsatellite length variation provides for the first time a clear picture of the evolutionary history of Darwin’s finches.  In this tree, horizontal branch lengths are proportional to genetics distance — the longer the horizontal line, the more different the DNA. Because their DNA is very similar, Geospiza scandens and Geospiza conirostris share a branch line from other ground finches that is very short. Because it’s DNA is very different from the others, Certhidea olivacea shares a branch line with all the other finches that is quite long. 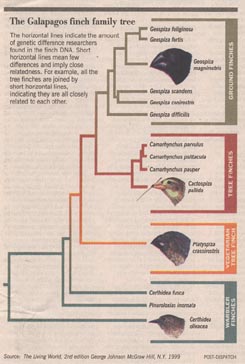 Most importantly, the evolutionary tree obtained by this analysis of finch microsatellite DNA is monophyletic. That is, all of the different Galapagos finches turn out to be descended from a single ancestral form. At the base of the tree, the ancestor to all the other finches, is a pointy-beaked warbler finch, Certhidea olivacea, with DNA very similar to warbler finches on Ecuador, 900 km away. Darwin was right.

The subsequent evolutionary history of the 14 finch species can be clearly seen in the microsatellite DNA tree. Galapagos finch evolution seems to have been driven largely by diet. The long, pointy beaks of Warbler finches are generally associated with an insectivorous diet. The first finches to reach the islands were insect eaters.

Two novel blunt-beaked forms evolved later, ground and tree finches, each opening up a new ecological niche. In one innovation, the broad, stout beak of the Geospiza ground finch is well suited for crushing seeds with the base of the beak. In the other innovation, the blunt beak of the Camarhynchus tree finch focuses greater biting strength at the tip for tearing vegetation.

Once these two novel beak shapes evolved, they each engendered a series of new species. In these diverging species of Darwin’s finches, the beak shapes remained relatively constant, while body and beak size evolved to fill the new ecological niche. The microsatellite DNA tree reveals these family relationships clearly. All the ground finches are more closely related to each other than to any other finch. Similarly, all the tree finches prove to be more like each other than like any other finch.

The DNA of the Galapagos finches contains preserved within it the traces of their evolutionary history, a story which we have now learned to read.