More than any other food, rice feeds our world.  Fully half the world’s population eats rice as a staple; it makes up fully two-thirds of the diet of subsistence farmers in Bangladesh and India.  Most of those reading this column have seen pictures of Asian rice fields  typically small level plots terraced up a hillside.  Did you ever wonder why the farmers went to the considerable trouble of carving level fields into the hillside, instead of simply planting along the slope of the hill? The rice fields have to be level because each field is flooded periodically by its farmer to kill weeds.  Typically, the farmer will flood a rice field for one day, long enough to kill the weeds without hurting the rice.  However, its important for the farmer not to flood the field too long — if under water for longer than three days, the rice plants die along with the weeds.  While able to survive for a few days immersed under water, a commercial rice plant is not happy submerged, and after a few days it uses up its ability to cope without oxygen and drowns (for much the same reason you would… it just takes three days for a rice plant to die, instead of the few minutes you would use).

And therein lies a big problem. In Bangladesh 20% of rice land is flood-prone. The yearly severe flooding caused by Monsoon rains has often led to famine, because under water for a week or more, the rice drowns. Many of India’s rice fields are also periodically flooded in Monsoon season.  For centuries, death has stalked subsistence farmers in Asia, the rice on which their lives depend always threatened by floods they can neither prevent nor  control.

Thirteen years ago, researchers glimpsed a ray of hope: David Mackill, senior scientist at the International Rice Research Institute in the Philippines, discovered a low-yielding indian rice variety that was able to survive flooding for 17 days with little or no problem. These rice plants would easily withstand being under water for the week of a Monsoon seasonal flood.  Studying this flood-resistant rice, Mackill found that its ability to withstand being submerged underwater was due to a single gene dubbed Sub 1. Using conventional breeding, Mackill crossed the flood-resistant rice variety with the commercial rice varieties being grown in Bangladesch and India in an attempt to produce a flood-tolerant strain acceptable to farmers there.  Unfortunately, the new hybrid strains he came up with were rejected by these farmers, who said the hybrid plants didn’t yield nearly as much rice as the commercial varieties they usually planted. Adding insult to injury, the hybrid rice didn’t taste good.

After a decade of breeding and no success fighting famine, Mackill decided to try something very different.  What was wrong with his traditional breeding approach, he decided, was that the hybrids he had created were more-or-less a 50:50 mixture of genes from flood-resistant and commercial varieties (just as you are a roughly equal mix of your father’s and mother’s genes). While the hybrids were indeed flood resistant, in the trade-off they had lost lots of desirable traits, which is why the hybrid rice plants grew slowly and tasted bad. What was wanted was a way to introduce the Sub 1 gene into commercial rice varieties without introducing any other genes from the flood resistant variety. 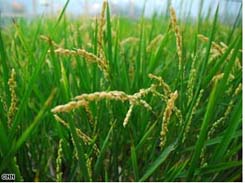 Time to enlist the help of gene jockies.  Mackill sent his flood resistant rice to University of California-Davis professor Pamila Ronald, one of a rising generation of plant molecular biologists. Ronald and her colleagues first isolated the Sub 1 gene, an achievement which is easy to state but was in fact a major accomplishment. Then, using the techniques of genetic engineering, the Ronald research team transferred the Sub 1 gene, and only the Sub 1 gene, into commercial rice.

This approach, called precision breeding, was first pioneered in New Zealand in 2004.  Until then, the transfer of genes into agricultural crops involved first placing the genes into a bacterial “vector,” a segment of bacterial DNA able to infect the plant.  This has the unfortunate consequence of introducing bacterial DNA into the target plant  — in a very real sense, you are mixing genes from one species with those of an unrelated species, creating a “transgenic” organism new to nature.  A lot of people get very worried about this, many of them well-informed scientists.

New Zealand agricultural scientist Tony Conner learned how to transfer a specific gene into a plant without the excess baggage of bacterial DNA. How did he do this?  Laborously.  Screening through the genomes of important crop plants like rice, he identified in each plant species a particular set of  DNA sequences that could be used to assemble a “vector” that works just like the bacterial one.  Why bother? Because the plant vector has no genes not found in that species. Because no genes from other species are introduced, the new variety is not “transgenic.”  Framers unwilling to accept a GM crop are readily accepting varieties produced by Conner’s precision breeding approach, now being used to improve potatoes, rice, and other commercial crops.

In 2006 Ronal used Conner’s precision breeding approach to introduce the Sub 1 gene into commercial rice varieties. These precision bred varieties were then planted in test fields in Bangladesh and India, with resounding success.  Farmers found three-to-five fold increases in yields due to flood tolerance, and the rice they harvested tastes the same as it always has.  The new flood-tolerant rice will be available to farmers throughout Asia within two years, an almost unheard of speedy commercial introduction.  Because the plants are the product of precision breeding rather than controversial genetic modification, they are not subject to the same regulatory testing that can delay release of GM crops for years.

Two months ago, in December 2008, the U.S. Department of Agriculture conferred its highest research award for this achievement, which will save many lives.