Much of the work being presented at the XVI International Botanical Congress, meeting at the convention center this week, involves genetic engineering. Put simply, gene engineering is moving genes from one organism to another.

Many scientists think of genetic engineering as a powerful tool with which to mold a better world. Others think transgenic plants created by bioengineers are nothing short of Frankenstein monsters. All of us will be affected by the resolution of the disagreement between these two points of view. To help us think more clearly about this debate, we need to have a rough understanding of how genetic engineering is actually done.

Real experiments are far more complicated than can be explained in a few paragraphs, but here is a simplified overview of how genetic engineering is done.

First, a scientist must get a sample of the gene he or she wants to transfer from one organism to another. Imagine, for example, that you wish to improve the nutritional quality of rice by adding to it a gene that increases its lysine content (lysine is an amino acid in short supply in many plants). Your first task is to extract DNA from a high-lysine plant, one with a gene that enhances lysine production.

In this instance, you decide to borrow the DNA from a daffodil, a lysine-rich plant. Using enzymes that cut DNA, you remove the high-lysine gene from the rest of the daffodil DNA and allow the gene to insert itself into tiny circles of bacterial DNA called plasmids. A lot of other bits of DNA get added into plasmids, too. This cutting and pasting is done by special enzymes that cut DNA, leaving sticky ends that adhere to similar sticky ends on any other DNA fragment cut by the same sort of enzyme.

Finally, you allow the plasmids carrying the daffodil gene to infect a culture of bacterial cells. With some biochemical slight-of-hand, you identify the bacterial cells which have succeeded in acquiring a plasmid and its daffodil gene cargo. You then grow each of these cells as a pure cell culture. Each culture is a “clone” of identical cells. Each different clone bears a different daffodil gene.

Now you must select, from many dozens of clones, the particular clone which bears the gene you want, in this instance the clone bearing the daffodil’s high-lysine gene. While there are many different ways to find a gene, one of the most widely-employed is to test each clone for its ability to stick to a special radioactive probe. The trick here is to fashion a probe made of DNA that will stick to the precise gene you seek, and no other.

DNA is composed of two mirror-image strands of the bases A,T,G, and C. An A on one strand pairs with T on the other; C pairs with G. No other pairs are possible. So if the sequence ATTCGGA is on one strand, then the sequence TAAGCCT, and only that sequence, will pair with it. A probe is a sequence of DNA that is the mirror-image complement of the gene you seek. Making the probe radioactive lets you detect its presence. To find the clone you seek, you simply test each clone for its ability to bind your probe — the one that does contains the high-lysine daffodil gene. 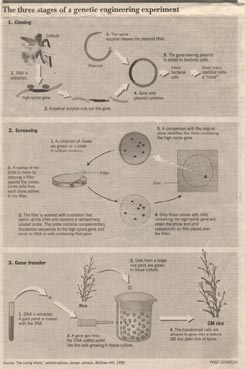 Unlike animal cells, plant cells are encased within a thick cell wall of cellulose. To introduce the daffodil gene into a plant, you must find a way to penetrate that thick wall. Infection is the easiest route. Infectuous plant plasmids can be used to carry your gene in piggyback, if the target plant will accept the plasmid. Bean-like plants like soybeans accept such plasmids readily. However, many grass-like crops, such as the cereal grains (rice, wheat, corn and so on), will not admit plant plasmids. To insert a gene into rice or other cereal grains, researchers sometimes remove the cell wall and zap the naked cell with electricity — the shock causes the cell to briefly open pores in its cell membrane, allowing your DNA to slip through.

You choose a more commonly used approach, literally SHOOTING the daffodil DNA into cells of a rice plant with a particle gun. While this may sound a little crazy, the particle gun works quite well. To load the gun, you coat high-lysine dafodil DNA onto tiny gold pellets (gold is massive and not chemically reactive). When you fire the gun, a burst of high-pressure helium gas slams a DNA-coated pellet through the thick plant cell wall and into the interior of a cell. The hole is so small the cell is not hurt. Once inside the cell, the injected DNA dissolves from the pellet and combines with the cell’s own DNA. Using a variety of now-standard techniques, you select the rice cells which have successfully received a pellet. Using standard tissue culture techniques, you then induce these cells to develop into adult rice plants. Your gene engineering experiment is now complete — you have created a genetically modified (GM) rice plant rich in lysine.

While every genetic engineering experiment presents its own unique problems, all of them follow this same general experimental strategy. The key take-away lesson is this: gene engineering is not complicated. No black magic is involved, just simple ideas you can, and should, explain to your kids. It took a generation of scientists to work all this out, but now that we know what to do, the approach is quite straightforward. Its power lies in its simplicity — essentially any gene can be moved into any organism. This opens up a Pandora’s box of countless possibilities, a prospect exciting or terrifying, depending on your viewpoint.