While AIDS deaths decreased in the United States last year, most of the world has not been so fortunate. Worldwide, more than 2.6 million people died of AIDS in 1999, and the UN reports 5.6 million new HIV infections that year, bringing the global total to 33.6 million. The search for an effective AIDS vaccine to stem this rising tide is one of the most sought-after and elusive goals of science.

Why so elusive? Its a vaccine’s job to alert the body to the presence of an infecting microbe, so the microbe can be destroyed by the body’s immune defenses. Vaccines work by literally feeling the outside of potential invaders, checking the proteins that protrude from the surface like so many boulders. When a foreign shape is detected, the alarm sounds. Thus to be effective, an AIDS vaccine directed against the HIV virus must be able to recognize some particular protein on the surface of the virus, a protein unique to HIV. Only when it does, can the vaccine alert the body’s immune defenses to attack HIV and any cells infected by it.

The difficulty is that the HIV surface proteins that are the target of the vaccine keep changing! A random change in a gene is called a mutation, and the genes of the HIV virus mutate extremely frequently, more often than any other virus known to science. When a gene encoding one of the virus surface proteins is the one that mutates, the shape of that protein is often altered, and as a result the vaccine no longer recognizes it.

This constant altering of HIV surface proteins is why the search for a universal anti-HIV virus has not succeeded. Like a gun shooting at a target that keeps moving aside, no one vaccine can successfully recognize HIV for long. For an AIDS vaccine to work, it must be targeted at something that doesn’t shift around so much.

Frustrated in their attempts to develop a vaccine targeted against HIV, most vaccine researchers have in recent years changed their focus to a less changeable target, the immune system cells with which HIV interacts. The interaction is like two people slow dancing. A protein on immune system cells called CD4 binds to a protein on HIV called gp120. Locked into each others arms, the cell cannot escape as the virus slips inside it.

Many AIDS vaccine designers are now attempting to disrupt this dance. If HIV cannot grasp these CD4 cells, it cannot enter and destroy them, and AIDS is prevented. How to stop these two partners from embracing? Two proteins are used by the cell to draw the virus close: the CD4 protein that protrudes from the cell surface like a sticky finger, and a second helper protein called CCR5 that positions the CD4 finger so that it nicely fits alongside HIV’s gp120 protein, like two fingers curling around one another.

What drew researchers’ attention to the possibility of blocking HIV entry into CD4 cells was the discovery of people with a defective form of CCR5. In these people, a segment of the DNA in the CCR5 gene was deleted, producing a faulty protein incapable of correctly positioning CD4 for binding to the HIV virus. Of 1,955 people at risk of AIDS with only the defective form of the gene, none were HIV positive. Clearly, if the virus cannot enter your immune system cells, you don’t get AIDS. 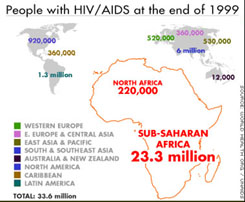 Lack of CCR5 doesn’t seem to have any adverse effects, at least none that are obvious, so blocking CCR5 to prevent AIDS seems a promising approach. Vaccine designers are crafting vaccines that will elicit antibodies directed at CCR5, disabling it. It is too soon to know how effective these new anti-CCR5 vaccines are going to be, but they certainly should be tried.

Recent research suggests a second potential target for a vaccine: If HIV cannot reach CD4 cells, it cannot infect them. Work published in the last few months has shed a great deal of light on the journey of HIV from its introduction into the body by sexual intercourse to its arrival at the lymph nodes where CD4 cells reside. Block this journey, and AIDS cannot get started.

Research by Ralph Steinman of the Rockefeller University in New York City and others revealed that the body’s immune defense uses special sentries called dendritic cells to patrol the inner surfaces of the mucosal epithelium that lines the mouth, vagina, and rectum. When these dendritic cells encounter a virus, they carry it to the lymph nodes and present it for inspection by CD4 cells, which react by calling other immune troops into battle.

In March, Dutch researchers led by Yvette van Kooyk, working with Dan Littman’s team at New York University, reported that when a dendritic cell encounters HIV virus, a special protein on dendritic cells that they called DC-SIGN binds quite strongly to the gp120 protein of HIV. The virus does not slip into the dendritic cell. Instead, DC-SIGN acts like a handcuff, tying the virus to the outside of the cell like a ball on a chain. Dragging its virus cargo along, the dendritic cell then migrates to the lymph nodes to present the virus for inspection, initiating the chain of events that ultimately leads to CD4 infection and AIDS.

The researchers found that HIV bound to dendritic cells by DC-SIGN could still infect CD4 cells even after 4 days, while HIV alone lost its infectivity in a matter of hours. You see the opportunity. If you can design a vaccine that blocks the binding of DC-SIGN to gp120, then you deprive HIV of its protected transport to the lymph nodes, making infection much less likely.