Science is by its nature a feisty enterprise, with researchers evaluating each other’s worknot always kindlyand constantly seeking better ways to test ideas against the hard reality of data.  When a scientific field is active, it is alive with controversy, with the slam-around give-and-take of aggressive inquiring minds.  This is nowhere more true than in the field of paleoanthropology, the study of human evolution.  For the last several years the field has been stood on its head by a tiny fossil from Indonesia.

This story begins in 1996, when Australian paleoanthropologist Michael Morwood reported that his team had excavated stone tools from a site on Flores island 300 miles south of Borneo in Indonesia.  The site was almost a million years old, long before the period when scientists thought sophisticated humans arrived there.  Even more to the point, Flores is isolated by a deepwater trench from the rest of Asia.  This deep-water barrier is called the Wallace Line after Darwin’s contemporary Alfred Russell Wallace who first noticed the marked differences between animals living on either side of it. On one side they resemble Asian species but on the other side they resemble Australian species.  Might early humans have somehow managed to cross?

Morwood and indonesian collaborators started looking for fossils on both sides of the Wallace Line.  In 2001 they began to examine caves that had been explored years earlier by other archaeologists, and in 2003 they hit pay dirt at Liang Bua (“cool cave”).  Six meters under the floor of the cave you see in the photo, in 18,000 year old sediment, Morwood’s team found the nearly complete fossil skeleton of a hominid, an early human.  The teeth are worn, and the skull bones are knitted together in an adult way, so the fossilized individual was an adultbut an adult hominid only one meter tall, with a brain of only 380 cc (cubic centimeters)!  This is the stature and brain size of a chimpanzee.  The fossil foot, essentially complete, is extremely large.  Workers at the site nicknamed the newly-discovered hominid “the hobbit” after the J.R.R. Tolkien characters in the book Lord of the Rings.

It did not take long for trouble to brew.  The paleoanthropologist who had excavated the cave in years past, a powerful Indonesian scientist, claimed the Flores fossil could not be human, and for several months had it removed for study by a rival Indonesian laboratory that agreed with his conclusion.  The fossil was eventually returned, damaged by poor treatment, and digging by Morwood’s team resumed.

In the meantime, a firestorm of controversy was developing among the scientific community.  This Homo floresiensis, as Morwood dubbed the fossil, makes no sense when viewed against the detailed picture paleoanthropologists have pieced together of human evolution.  For one thing, it is too young.  In a 3 million year old pre-human ancestor the Flores fossil’s tiny dimensions would not be suprising, but the fossil is only 18,000 years old.  That means it was alive when Homo sapiens  (modern human) had evolved and even crossed the Wallace Line to Australia.

For another thing, the Flores individual is too short.  Early African human ancestors called australopithicenes were this size, 20 kg and about a meter tall, but every adult human fossil ever found is much bigger and taller.  The humans alive 18,000 years ago were not tiny but the same stature as humans today.

For yet another thing, the brain of the Flores fossil is too little.  Our current view of human evolution has human brain size increasing with time, along with the use of sophisticated stone tools.  Chimpanzees and australopithicenes left no stone tools.  Tools are not seen until larger-brained humans evolve. So what are we to make of sophisticated stone tools that were found in the cave with the Flores fossil?  Many experts flinched at the suggestion that the little Floresians made sophisticated tools with 380 cc brains.

And yet, despite all these objections that the Flores fossil could not exist, there it is, hard data.  What are we to make of it? Morwood’s initial suggestion was that the Flores fossil is a member of a human species that evolved in isolation on Flores island from ancient humans that reached there long ago.  The ancestor of Homo sapiens, called Homo erectus, shares certain characteristics with the Flores fossil and so is the most likely candidate.

Morwood went on to speculate that large mammals colonizing remote small islands often tend to evolve into isolated dwarf species.  Many example are known, including pigmy hippos, ground sloths, deer, and even dinosaurs.  Indeed, pigmy elephants no bigger than cattle lived on Flores island at that very time — fossils of hunted specimens are found in the Liand Bua cave!  Why do dwarf species evolve?  The theory is that on islands with few or no predators, there is no advantage to being big, and with limited food there is great advantage to being small.  Perhaps on Flores island, Morwood suggests, the human evolutionary story has played out differently than it did in Africa, evolution favoring the small. 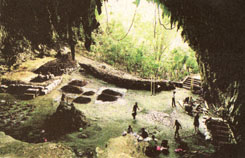 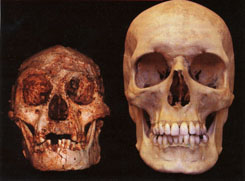 “Wait a minute!” cried researchers from the Field Museum in Chicago, who in 2006 challenged the classification of the Flores fossil as a new species.  Its brain is simply too small for a dwarf species, they claimjudging from other instances in which pigmy species have developed in isolation, the Flores brain size of 380 cc would indicate a creature only one foot tall!

Agreeing, the Indonesian anthropologists who had  for a brief while seized the Flores fossil proposed that it was not a “new” human species, but  rather simply a modern human suffering from microcephaly, a genetic disorder that results in small brain size.

Morwood’s team was not ready to concede the argument. Far from it.  In subsequent digs at the Liand Bua cave in 2004 they found a total of eight more tiny individuals, all of them even smaller that the complete fossil unearthed the previous year.  It stretches the imagination to believe that all suffer from microcephaly.  Strengthening their claim that the Flores fossils are not modern humans are two complete lower jaws, neither of which have chins.  Chins are found on the lower jaws of all modern human fossils.

The controversy ignited by the Flores fossils has continued to spur research.  In one interesting study, investigators carried out a CAT scan of the skull to come up with an image of its interior, which they could use to build a virtual image of the brain that used to reside there.  The brain shape they see bears little resemblance to microcephalic human brains.  Actually, it doesn’t look much like Homo erectus either.  The very front part of the brain, which in modern humans is involved in undertaking initiatives and planning future actionscalled Brodman’s area 10is in the Flores skull highly folded and convoluted, suggesting that the brains of the little Flores people may have been reorganized, with convolutions and rewiring of key components of higher cognition.

In the spring of 2006, anatomist Susan Larson of Stony Brook University in New York presented her detailed analysis of the complete Flores skeleton.  She pointed out that the upper arm bone, or humerus, lacks a peculiarly shared by all living people.  In modern humans the top or head of the humerus is twisted with respect to the elbow joint by about 145 to 165 degrees.  As a result, when you stand straight, the inside of your elbows face slightly forward, allowing you to bend your elbows and work with your hands in front of your body.

In the Flores skeleton the humerus is only slightly twisted, Larson reports, rotated only about 110 degrees.  Such an arm could never work for tool-making.  In an attempt to sort this out, Marwood invited Larson to Indonesia to examine the original specimen.  She found that the upper arm and shoulder of the Flores individual were oriented slightly differently than in modern humans.  The shoulder blade is shrugged a bit forward in a way that changes how it meets the humerus, allowing the elbow to bend much as it does in living people.

Where else is this peculiar arrangement found?  Homo erectus also has a relatively untwisted humerus.  This observation adds weight to the proposal that the little Flores people had Homo erectus rather than modern human ancestors.

Meanwhile, an array of researchers continued to argue vehemently that all this talk of  a  new species of pigmy human was simply flat wrong, that the Flores skull was nothing more than a microcephalic  human.  Over the last two years this possibility has been subjected to a hard look by paleoneurologist Deqan Falk and her colleagues, who carefully compared the Flores brain to ten microcephalic brains. They found a battery of distinct differences, and concluded that the Flores brain was not microcephalic, period. This settles the issue for me, although I have no doubt the ferocious argument will continue.

The Floresians of the Liang Bua region seem to have perished after an eruption of one of the island’s many volcanoes about 12,000 years ago.  But they may have survived much longer elsewhere on Flores, Dr. Morwood believes.  The search for more fossils goes on.