Childhood memories have a way of sticking to the unconscious like glue, then popping up at unexplained times. That happened to me this week, reading a report of a new species of mammal found in Southeast Asia. This memory has been hiding within my head almost 40 years. I finished high school in midyear, 1960, too late to start at college, so my parents shipped me off to work for six months on a small cattle ranch in Buffalo, Wyoming. Certain memories have never faded about that summer, mostly about being dry and tired of irrigating hayfields and wondering where all the cows and horses were. As it turns out, they were all up on Federal grazing land in the nearby Bighorn Mountains, getting fat while I worked to produce their winter feed.

The memory that just popped back is of the mysterious “jackalope,” a creature I saw one clear hot night, out riding with the ranch crew. I was a green teenager from Virginia just learning to ride and they were all local kids and a good bit older. Like all new hands, I had no saddle and was riding bare back — this is done to avoid chaffing the horse, not the rider. The crew had told me about the jackalope, a large ill tempered jackrabbit with the horns of an antelope. These horns were nothing to fool with, they warned me, black sharp prongs jutting up six inches from the jackalope’s head. Jackalopes had been known to rip a horse’s leg open from ankle to knee, and could do terrible things to a prone man, should I be thrown from my horse in an attack. Luckily, jackalopes were not common. None of the ranch crew had seen one this year, at least not clearly.

It will come as no surprise to anyone reading this that a jackalope did indeed appear amongst us that night. As I’ve aged I’ve become cynical, and no longer believe everything my eyes tell me, but I did that night. I was riding in front on a narrow trail winding up the steep side of a dry hill (the first time the crew had let me take the lead position). As I lumbered up the steepest part of the hill, endeavoring mightily to avoid sliding down off the horse’s backside, there it was. Fear does not begin to describe what I felt. I can see that jackalope, right in the path, as clearly now as I did that night, every detail of its horns etched sharply on memory, the taste of my fear as vivid and liquid now as then.

The horse, being no fool and not about to make the acquaintance of any jackalope, managed a 180 degree turn in the air that sent me flying downhill like shot out of a cannon. Several of the crew members rode down and collected me, and helped me get my horse. None of them ever saw the jackalope, and congratulated me on my luck. I don’t remember any laughter. To this day, in my mind, I saw a jackalope.

What brought this memory out of hiding after all these years was a newspaper photo I saw last week of a new species of rabbit just discovered by a researcher named Robert Timmins with the Wildlife Conservation Society. Never before known to science, this rabbit was first discovered for sale in a food market in a remote village in the isolated Annamite Mountains of Laos. A remote rugged region off limits to Westerners until this decade, the Annamites are home to half of the roughly dozen large mammals discovered in the world in this century. 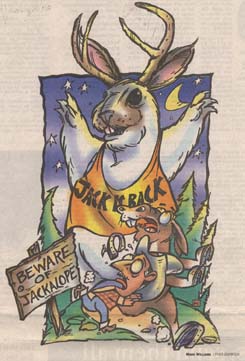 It was the look of that photo that blasted loose my memory of the jackalope. The Annamite rabbit is yellow, with black stripes like a tiger’s, only lengthwise! Who ever heard of such a beast? I am convinced that this Laos rabbit, not yet given a scientific name, is a direct relation of the jackalope. The jackalope, a creature of Wyoming, is a mixture of traits from jackrabbit and antelope, both Wyoming natives. The new Annamite rabbit is a mixture of traits from rabbit and tiger, both Laos residents. Of course the rabbit’s stripes go the wrong way, but we don’t know just how this “rabbiger” came about — maybe something got a little twisted.

I wondered, looking at the photo of the rabbiger and remembering my encounter with the jackalope, what sort of field crew Timmins was working with that day. Like my ranch crew, were they locals, residents of the Annamites anxious to show the “outlander” an interesting time?

Actually, as a scientist I don’t really doubt the existence of Laos stripped rabbits. They even have cousins in Sumatra 900 miles to the south. But I can’t get out of my mind the jackalope I saw, and the nagging question of whether Annamite crew members can laugh as softly as Wyoming ones.