Like most of us, I try to eat healthy food. I really do.  But I have a weakness for fast food  especially Big Macs.  My wife and daughters have tried for many years to cure me of this addiction, to no avail.   Every few weeks, sure as taxes, I encounter a Big Mac too attractive for me to resist.

“So what’s so wrong with a Big Mac, anyway?” I ask my daughters.  Well, for one thing, they point out,  my body doesn’t need all those extra calories. Looking at my waste, I have a hard time arguing that. For another thing, the bread in a Big Mac is not all that nutritious, they claim. Like every other human, my body obtains the trace elements it needs from the food I consume.  When the food I eat is deficient in one or more trace elements, my health suffers.

You are perhaps already familiar with one instance of a major human food being deficient in a key trace element.  Rice, which feeds more people than any other crop, is seriously deficient in iron.  Apparently long back in history during the domestication of rice, the genes necessary for iron uptake have been lost.

Some months ago I wrote about how genetic engineers corrected this nutritional deficiency of rice by inserting into the chromosomes of cultivated rice the necessary genes.  This very desirable improvement, dubbed “golden rice” because its grains have a more yellow color, has proven controversial with the public, as genetically-engineered crops are not accepted as suitable food by many people.

Second only to rice as a human source of calories is wheat, one of the world’s three most important crops (along with rice and corn).  All of us consume wheat as bread, pasta, and cereal, an everyday part of our diet.  Worldwide, wheat provided about 20% of all the calories people consume.  The hamburger roll surrounding a Big Mac contributes a substantial portion of the calories it’s eater consumes — but no t, my daughters remind me, a lot of nutrients.

Why not?  Why is wheat not a more nutritious food?  Unfortunately, sometime during its domestication wheat underwent a change that lowered the protein, zinc, and iron content of its grain.  In 2006 a team of researchers led by Jorge Dubcovsky of the University of California, Davis found out what had gone wrong.  The team identified a gene that has been damaged and no longer functions properly as the culprit, a gene which they dubbed NAM-B1.  In healthy grain plants, this NAM B-1 gene controls the recycling and distribution of nutrients to the grains when the leaves die off.  Without a working copy of the gene, cultivated wheat does not make the most effective use of what it has, leaving significant amounts of protein, iron, and zinc in its straw.

No one knows why the gene became nonfunctional during the domestication of wheat, as there would seem to be little value in this inefficiency.  Indeed, the loss of NAM-B1 function causes the grain to mature less quickly, certainly not to the plant’s benefit.

In an attempt to find out what happened, Dubcovsky’s research team looked to see what the immediate ancestors of commercial wheat were like.  The evolutionary history of wheat’s domestication has been worked out in detail by plant researchers, and each species along the evolutionary journey from wild grass is known.  Had they lost this gene as well? 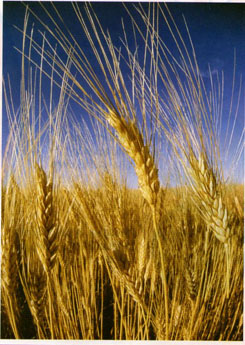 In a word, no.  When the research team examined the genome of wild emmer wheat, one of commercial wheat’s ancestors, they found a fully functional NAM-B1 gene.

This finding raised an exciting possibility.  Emmer wheat can be freely crossed with domestic strains of cultivated wheat by conventional breeding methods.  Thus without using any controversial genetic engineering methods it should be possible to bring back the gene that had been lost.  And so it proved.  “We didn’t do it by genetic modification. The normal wheat crosses perfectly well with the wild wheat.  So we just crossed it… normal breeding,” Dubcovsky said in an interview.  Because the wheat varieties bred by the scientists are not genetically modified, they may become more readily accepted commercially.

There is every reason to hope the new wheat varieties produced by Dubcovsky’s team become widely accepted. The transfer into pasta and bread wheat varieties of the missing NAM-B1 gene had just the effect the researchers had sought: the gene made the grain mature more quickly while also boosting its protein, iron and zinc levels by 10-15 percent.   The World Health Organization has said that upward of 2 billion people get too little zinc and iron in their diet, so this change offers a very desirable improvement.

While the NAM-B1 gene makes pasta and bread more nutritious, it does not change how it tastes.  The composition of the grain is not altered dramatically, although the improvement in nutritional value is significant.  “What this gene does is it uses better what is in the plant already, so rather than leave the protein and the zinc and iron in the straw, we’ve moved a little bit more into the grain,” Dubcovsky said.

Because the new strains of wheat were bred from widely-used commercial varieties, they retain the farmer-friendly characteristics such as high yield for which the commercial varieties had originally be bred, while gaining nutritional value important to those eventually eating the pasta and breadall of this without resorting to DNA manipulation or other genetic engineering. While as a biologist I understand that plant breeding and genetic engineering accomplish exactly the same thing moving a desirable gene from one species to another it is comforting to everyday citizens to see this demonstrated so clearly.

Now if MacDonalds will get on the wagon and start using NAM-B1 bread, maybe I can get a few more Big Macs past my daughters.