Today, on Saint Patrick’s day, my mind turns not to shamrocks and green beer, but to snakes. My mother, a wiry Canadian with four Irish grandparents, was more Irish on Saint Patrick’s day than anyone born on the Emerald Isle. She died a few years ago at 84, but it is her voice I hear today. Her eyes both serious and merry as only the Irish telling tales can manage, she is explaining to my youngest daughter Suzanne how Saint Patrick drove the snakes from Ireland. “Charmed them into the sea, he did,” she would say, her voice ringing with pride. In memory I see my daughter listening wide-eyed. She knew her grandmother wasn’t much for legends or fairy tales — a very no-nonsense old lady — and so the firm conviction in grandma’s voice carried special weight.

It is a lovely legend, now firmly imprinted on the mind of another generation of my family. With my mother’s voice, my daughter berates my doubt. “There ARE no snakes in Ireland. If Saint Patrick didn’t remove them, where did they go?” It is only because I am a scientist that I am a skeptic, my daughter tells me, and in this she is of course quite right.

So how am I to answer Susie’s question? If Saint Patrick didn’t rid Ireland of snakes, what did? Can science tell us why are there no snakes on Ireland? Unfortunately, for one who values Santa Clause, UFOs and leprechauns as I do, science can.

Lets start with snakes. It may come as something of a surprise, but from a biological point of view a snake is just a lizard without legs. The fossil record tells us that snakes evolved from lizards about 100 million years ago, in the late Cretaceous, about when T. rex first appeared.

These prehistoric snakes never made it to Ireland, however. Ireland was under water then. The 700 foot chalky Cliffs of Moher on Ireland’s west coast were laid down as the floor of that ancient sea (as were the white cliffs of Dover).

These first snakes were not common, all members of the primitive group that includes today’s constrictors and pythons. Snakes never really became common until the last few million years, when the more versatile modern snakes evolved. The world’s climate began to dry and cool then, leading to a flourishing of frogs and rodents. This presented a great evolutionary opportunity for snakes, the only animals able to follow rodents and frogs down into their burrows without digging.

Today snakes are found almost everywhere on earth, living in deserts, grasslands, forests, and even oceans. However, snakes cannot survive where the ground stays frozen the year round. No snakes live in polar regions, or at high elevations in mountains. Snakes are “cold blooded,” assuming the temperature of their surroundings. Without the insulation of a burrow, icy weather freezes a snake solid, killing it just as freezing would kill you. This not-often-appreciated fact turns out to be the key we have been seeking, the reason why there are no snakes in Ireland.

Ireland is an island today, separated from Scotland by a dozen miles of deep ocean water, the North Channel. But it wasn’t always an island. Land undoubtedly bridged the narrow channel to Scotland and Europe more than once, as oceans rose and fell in the 100 million years since snakes evolved. So why didn’t snakes wander over to Ireland from Europe? They almost certainly did. So where are their descendants today? They have been removed. Not by Saint Patrick, but by ice. 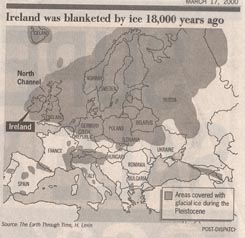 Starting 1.8 million years ago, in an icy period scientists call the Pleistocene, a series of great ice caps formed over Northern Europe (and covered North America practically down to Missouri). Each time the glaciers moved down, all of Ireland became buried under a deep sheet of ice. No snake could have survived this. Any snakes that had gotten to Ireland died an icy death.

When the last glacial ice finally disappeared from Ireland 18,000 years ago, its land remained frozen several hundreds years longer because the warming waters of the Gulf Stream were blocked from reaching England and Ireland as they do today, leaving the Irish weather frigid (remember, Ireland has the same latitude as Hudson’s Bay in North America).

Only after the great freeze finally ended in Ireland some 15,000 years ago would a snake have been able to survive in Ireland — and by then 12 miles of icy North Channel ocean water barred the way from England and Europe, a barrier no terrestrial snake could breach. There are no snakes in Ireland today for the simple reason there is literally no way for a snake to GET to Ireland.

This then is the real answer to Susie’s question of how Saint Patrick charmed the snakes out of Ireland. He did it with that special Irish gift for story telling, what my mother called “blarney”. Somehow I feel the poorer this Saint Patrick’s day, for knowing as a scientist that there were no snakes in Ireland for Saint Patrick to charm. We all can use a little blarney to brighten our day, even us scientists.