In the last decade the United States has undergone a revolution in agriculture. Genetically modified crops of corn, cotton, and soybeans are now commonplace — in 1999, over half of the 72 million acres planted with soybeans in the United States were planted with seeds genetically modified to be herbicide resistant, with the result that less tillage has been needed, and as a consequence soil erosion has been greatly lessened. These benefits, while significant, have been largely confined to farmers, making their cultivation of crops cheaper and more efficient. The food that the public gets is the same, it just costs less to get it to the table.

Like the first act of a play, these developments have served mainly to set the stage for the real action, which is only now beginning to happen. With Monday’s ground-breaking for the Danforth Center, the stage is set for St. Louis to play a significant role in realizing the real promise of plant genetic engineering, which is to produce genetically-modified plants with desirable traits that directly benefit the consumer. Research reported yesterday at the International Botanical Congress (IBC) gives us a hint of what is to come.

One genetic advance, arguably the most important paper of the IBC, describes Ingo Potrykus’s transgenic rice. In developing countries large numbers of people live on simple diets that are poor sources of vitamins and minerals (what botanists called “micronutrients”). Worldwide, the two major micronutrient deficiencies are iron, which affects 1.4 billion women, 24% of the world population, and vitamin A-deficiency, affecting 40 million children, 7% of the world population. The deficiencies are especially severe in developing countries where the major staple food is rice. In research described Tuesday, Swiss bioengineer Ingo Potrykus and his team at the Institute of Plant Sciences, Zurich, have gone a long way towards solving this problem. Supported by the Rockefeller Foundation and with results to be made free to developing countries, the work is a model of what plant genetic engineering can achieve.

To solve the problem of dietary iron deficiency among rice eaters, Potrykus first asked why rice is such a poor source of dietary iron. The problem, and the answer, proved to have three parts:

1. Too little iron. The proteins of rice endosperm have unusually low amounts of iron. To solve this problem, a ferritin gene was transferred into rice from beans. Ferritin is a protein with an extraordinarily high iron content, and so greatly increased the iron content of the rice.

2. Inhibition of iron absorption by the intestine. Rice contains an unusually high concentration of a chemical called phytate, which inhibits iron reabsorption in the intestine — it stops your body from taking up the iron in the rice. To solve this problem, a gene encoding an enzyme that destroys phytate was transferred into rice from a fungus.

3. Too little sulfur for efficient iron absorption. Sulfur is required for iron uptake, and rice has very little of it. To solve this problem, a gene encoding a particularly sulfur-rich metallothionin protein was transferred into rice from wild rice. 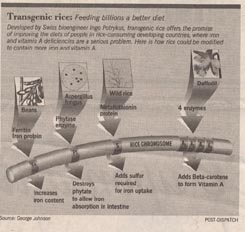 To solve the problem of vitamin A-deficiency, the same approach was taken. First, the problem was identified. It turns out rice only goes part way toward making beta-carotene (provitamin A); there are no enzymes in rice to catalyze the last four steps. To solve the problem, genes encoding these four enzymes were added to rice from a familar flower, the daffodil.

Potrykus’s development of transgenic rice to combat dietary deficiencies involved no subtle tricks, just straightforward bioengineering and the will to get the job done. The transgenic rice he has developed will directly improve the lives of millions of people. His work is representative of the very real promise of genetic engineering to help meet the challenges of the coming new millennium.

Other work, to be presented at the Congress today, describes corn and soybeans with improved amino acid composition. Plants are notoriously low in the amino acid lysine, which our bodies require. To overcome this deficiency, researchers have transferred into corn and soybeans genes from bacteria that promote lysine production. The genetically modified crops have up to 100 times more lysine than traditional crops do!

In another advance, bioengineers have modified soybeans to possess healthier fats. Most soybean fat is poly-unsaturated and decomposes when heated. Industrial hydrogenation to increase the stability of these fats produces unhealthy trans fatty acids as a byproduct. By transferring into soybeans a gene encoding monosaturated fat, gene engineers have raised the relative level of healthy monosaturated fat in soybeans from 25% to 85%.

As you can see, the list of gene modifications that directly aid consumers is already large, and it will only grow. In Holland, Dutch bioengineers announced last month that they are genetically engineering plants to act as vaccine-producing factories! To petunias they have added a gene for a vaccine against dog parvovirus, hiding the gene within the petunia genes that direct nectar production. The drug is produced in the nectar, collected by bees, and extracted from the honey. It is hard to believe this isn’t science fiction.

Clearly, the real promise of plant genetic engineering lies ahead, and not very far.