What do reindeer and little children know that we don’t?

Tonight is Christmas eve, and my daughter Caitlin and I are going to sort out this Santa Claus business once and for all. There was a time, only a few very brief years ago, when all three of my daughters believed in Santa Claus. But, much as I have resisted the process, my daughters have grown older. Christmas has become a less magical if no less loving time, a celebration of family, rich with presents and cheer and hope.

Except for my stubborn one, my Caitlin. She who believes in fairies and everyday magic finds it hard to relinquish Santa, her faithful childhood friend. She does not want to give up her childhood, or Santa. She came to me this year and said, “Look, dad, is this true? Is there a Santa?” What is a father to say to a child he loves about letting go of her childhood?

What I said was “Look, I’m supposed to be a scientist. Lets test the hypothesis.”

With grave delight, Caitlin set about helping me formulate a set of testable hypotheses. First, as in most science, comes the library work. It turns out that while St. Nick is an old Christmas tale, people have known about Santa for less than two hundred years. The general public first became aware of him in a book called Knickerbocker’s History of New York, written by Washington Irving in 1809. In it Irving describes a rotund fellow in a red coat riding over treetops in a wagon drawn by reindeer bringing gifts to children on Christmas eve. The Dutch word for Saint Nicholas is “SinterKlaas,” and in Irving’s book the name is pronounced the way a child would, as “Santa Claus.” The details were fleshed out fourteen years later, when in 1823 Clement Moore wrote “Twas the night before Christmas…”

This then is the data set Caitlin and I had to work with. The core of the theory of Santa Claus is that there is this overweight guy that flies a reindeer-drawn sleigh to every household on Christmas eve, giving presents to children.

So what’s so hard to believe about that? Caitlin and I discussed this at length, and settled on two testable hypotheses. Accepting any one of them stretches even the credibility of a child who believes in fairies. If they both prove true, then surely Santa must be.

1. Reindeer really know how to fly. The idea of Rudolph and Prancer and all those other reindeer flying through the air runs contrary to any deer we ever saw. Without wings or a rocket-like digestive system, it’s hard to see how a reindeer could fly.

2. Santa can get down the chimney. How does a really fat old man slide down narrow chimneys? How does he squeeze through, and why doesn’t he get seriously dirty? And what about houses that don’t have a fireplace?

The essence of science, as I have often rather pompously explained to my daughters, is testing. To test these two hypotheses, Caitlin and I devised two experiments, to be carried out tonight, on Christmas eve.

1. A flying reindeer detector. If reindeer really fly, drawing Santa’s sleigh to our roof, then they would have to pass between two sets of great trees that loom over our house, one at each end. There simply isn’t any other way to approach our roof from the air except through the opening between these trees. So up the ladder I went one morning this week, Caitlin gallantly trying to hold the ladder steady. At one end of the house I tie a black thread to a tree limb. Then I toss the spool as hard as I can over the rooftop towards the far side. With a lot of fussing, I manage to fish the thread over, and climbing the ladder at the other end, I draw the thread tight and tie it to a tree branch. On the thread we have hung several tiny bells, designed as decorations but up to the task. Any reindeer that flies over this roof is going to ring our little bells. My tape recorder, turned on at midnight, will serve as our detector. 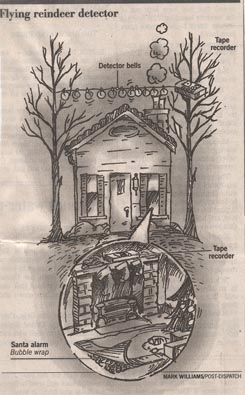 2. A Santa trap. Our house has several chimneys. To channel Santa’s entry to the living room, Caitlin and I have closed the flue in the other chimneys, and crammed a chair into each fireplace so the flu can’t be forced open from the outside. In the living room we set our Santa trap. The living room has a big rug extending all the way from the fireplace to the far corner, where the Christmas tree is. We took the rug up, and poured over the floor two large boxes full of crinkly packing material. You know the kind — sheets of plastic bubbles that go “pop” when you press them. Then we rolled the rug back. As the final touch, we put Caitlin’s tape recorder on the mantel over the fire place, nestled inconspicuously among the ornaments. Before we go to bed at midnight, we’ll turn it on. If Santa comes down that chimney and goes to that tree, we’ll surely hear recorded the “pop, pop” of his passage.

Our experiments have taken days to set up, a vivid time full of laughter and discussions of Santa. A key question occurs to me: If our ideas about Santa originated with Washington Irving in 1809, how did Irving learn what Santa Claus was like? There is no hint of this Santa before him. I ask Caitlin, who answers logically. “Washington Irving must have SEEN Santa himself.”

And suddenly it occurs to me, “Of course he did — in his whimsical mind’s eye!” The real essence of the theory of Santa Claus is not flying reindeer or sliding down fireplaces, I realize, but belief in them. Santa Claus is belief in wonder, readily accepting the possibility that what we don’t know may be true. One fertile accepting mind like Irving’s can create an idea that outlasts time.

As Caitlin and I busily finish our preparations to scientifically test the theory of Santa Claus, I realize that carrying out the investigation has been, in itself, the real proof I was seeking. The surmise that Santa might be, so readily accepted by my daughter, proves that the Christmas sense of wonder survives in her — and, I hope, in me.