Last Sunday at the American Heart Association convention in New Orleans, researchers reported that cholesterol-lowering drugs called statins can dramatically lower the risk of heart attack and stroke. In a study involving nearly 18,000 people 50 and older who did not have high cholesterol or a history of heart disease, the risk of heart attack was more than cut in half for people who took statins rather than a placebo.

Statins?  Why in the world would researchers suspected that statins like Crestor or Lipitor might protect people with low cholesterol from heart attack?  Aren’t heart attacks caused by diets high in cholesterol?

Yes, they are — sometimes. Your heart pumps blood throughout your body through a network of blood vessels, and these blood vessels can become clogged with fatty deposits that block the flow of blood. A heart attack occurs when the supply of blood to the heart is  cut off completely when a break-away chunk of fatty deposit lodges in a cornary artery.  Deprived of blood circulation for more than a few minutes, muscle cells of the heart begin to die; if enough cells die, the heart stops beating and death quickly follows.  Because it is a simple matter to measure the cholesterol levels in a person’s blood, many people at risk of heart attack can be identified and statin drugs administered to reduce their cholesterol levels.

However, this doesn’t mean that a person with low cholesterol is safe. Every day people with low cholesterol who are in perfect health — who do not smoke, exercise regularly, and eat a healthy diet — drop dead of a heart attack.  Last summer, you may recall, TV commentator Tim Russert and comedian George Carlin died of unanticipated heart attacks.  Heart attacks kill more than 500,000 people in the United States each year, and fully half of these people have normal cholesterol levels. There must be more to the story than high cholesterol.

There is.  Doctors have identified other risk factors, among them are smoking, high blood pressure, family history, obesity, physical inactivity, and age .Many people who appear healthy are actually at risk, and don’t have a clue that they are in peril.  Researchers have searched for a reliable indicator of this risk and, as I wrote in a Beacon column last June, feel they may have found one in a molecule called C-reactive protein (CRP).

CRP is a molecule associated with the inflammation response in the body.  Inflammation is one of the ways your body fights infection and reairs damage.  In response to invasion of the body by microorganism or damage to tissues, your body’s immune system sends an army of defensive white blood cells to the threatened area.  There these cells release a barrage of chemicals to fight the infection, one of the chemicals being CRP.

What has this got to do with heart attacks?  Researchers have long suspected that inflammation may play an important role in the events leading up to a heart attack, and were able to demonstrate that C-reactive protein is present in the hearts of heart attack victims.  Harvard  cardiologist Paul Ridker and coworkers took this line of conjecture one step further and started looking at CRP as an indicator of cardiovascular disease in seemingly healthy people. They found, in both men and women, that those with elevated CRP levels were two to three times more likely to suffer from a heart attack or stroke. The men’s study showed that inflammation, indicated by elevated levels of CRP, was present five to ten years in advance of a heart attack.  The women’s study showed that CRP was actually a better indicator than cholesterol in predicting cardiovascular disease. 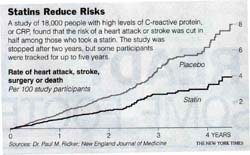 These studies lend credence to the emerging view that chronic inflammation plays a key role in cardiovascular disease. CRP is released by the liver in response to acute infections and is a key player in the body’s attempt to fight the infection.  The inflammatory response is also triggered as a result of tissue damage.  Doctors have know for quite sometime that CRP levels are elevated following a heart attack because the body is trying to repair damaged heart muscle cells. These new studies, however, indicate that the inflammatory response is triggered much earlier, when cells that line blood vessels release CRP as the fatty deposits are first accummulating.  The triggering of the inflammatory response, a process that is suppose to help the body, might actually make matters worse in the heart because the white blood cells that migrate to the site might also contribute to the fatty deposits in the blood vessels.  In fact, the inflammation might also contribute to the actual heart attack or stroke by weakening the fatty plaques, causing them to rupture. Small fragments of the plaque then become lodged in smaller blood vessels of the heart or brain causing heart attack or stroke.

The mounting body of evidence increasingly supports the view that inflammation is an integral part of cardiovascular disease, and suggests that CRP may be a reliable early indicator of the presence of dangerous inflammation in the heart.

Now you can see why researchers carried out the large (and very expensive) worldwide clinical trial mentioned at the beginning of this article. Because a simple blood test can measure the level of CRP, it is feasible for a clinical trial to test if statins reduce levels of CRP in the blood of people with high levels of C-reactive protein, and, if so, if this prevents heart attacks.  The graph shows the results, which are so striking that an independent safety monitoring board shut down what was supposed to be a five-year trial last March after less than two years — you could not ethically continue to treat thousands of people with a placebo after learning that many of their lives could be saved with the statin (Some participants had started the study earlier, and so were tracked for as long as five years, which is why the base of the graph extends for five years rather than stopping after two years.).

Until this study, a CPR test has not been routinely requested for most Americans.  If CRP levels are found to be high, there wasn’t any clear way to treat the condition.  While statins are used to treat high cholesterol, there was no clear evidence until this study that statins are also effective in lowering CRP levels or reducing inflammation. Now that we know, CPR testing will surely become more common, one more weapon in the battle against heart disease.  Fewer people — possibly a whole lot fewer people — will die as a result of our having this new way to defend ourselves.

But there are still no guarentees. CRP levels were not high for Tim Russert.  For him, and for a lot of us, there still isn’t going to be any warning.  Cholesterol and C-reactive protein are still only part of the picture. This sad fact keeps heart researchers on the prowl for other indicators of heart disease risk, whittling down the unknown.  That is how science works, a bit at a time.  This week we took out a big chunk.