Because they can develop into any tissue, embryonic stem cells offer the exciting possibility of restoring damaged tissues.  You can see a colony of human embryonic stem cells in the photo. Each is totipotentable to form any body tissue, and even an entire adult animal. What is an embryonic stem cell, and why is it totipotent? To answer this question, we need to consider for a moment where an embryo comes from. At the dawn of a human life, a sperm fertilizes an egg to create a single cell destined to become a child. As development commences, that cell begins to divide, producing after five or six days a small ball of a few hundred cells called a blastocyst, enclosing an inner cell mass of up to 200 embryonic stem cells. Each embryonic stem cell has all of the genes needed to produce a normal individual. In cattle breeding, for example, these cells are frequently separated by the breeder and used to produce multiple clones of valuable offspring.

As development proceeds, some of these embryonic stem cells become committed to forming specific types of tissues, such as nerve tissues, and, after this step is taken, cannot produce any other kind of cell. The genes needed to produce those other types of cells are inactivated and cannot be expressed. In the case of nerve tissue, they are then called nerve stem cells. Others become specialized to produce blood cells, others to produce muscle tissue, and still others to form the other tissues of the body. Each major tissue is formed from its own kind of tissue-specific adult stem cell. Because an adult stem cell forms only that one kind of tissue, it is not, and cannot be, totipotent. Or so we thought. More about that later.

Such stem cell transfer experiments have already been tried successfully in laboratory mice without immune defenses. Heart muscle cells grown from mouse embryonic stem cells have been successfully integrated with the heart tissue of a living mouse. In other experiments, damaged spinal neurons have been partially repaired, suggesting a path to treating spinal injuries. DOPA-producing neurons of mouse brains, whose progressive loss is responsible for Parkinson’s disease, have been successfully replaced with embryonic stem cells, as have the islet cells of the pancreas whose loss leads to juvenile diabetes, also called type I diabetes.

Because the course of development is broadly similar in all mammals, these experiments in mice suggest an exciting possibility, that embryonic stem cell therapy may allow the successful treatment of damaged or lost tissues in humans. Individuals with a severed spinal cord might have the injury repaired with embryonic stem cells that replace the damaged neurons. The damaged heart muscle cells of heart attack victims might be replaced with embryonic stem cells that form new heart muscle at the site of damage. Juvenile diabetes might be cured with new insulin-producing islet cells,. Individuals with Parkinson’s disease like Michael J. Fox might be partially or fully cured with new DOPA-producing neurons.

This was all a pipe dream, however, until one key problem was solved.  How do you stop the patient’s immune system from rejecting the stem cells?

Early in 2001, a research team at the Rockefeller University reported a way around this therapeutic dead end. Their solution? They first isolated skin cells from a mouse, then using the same procedure that created Dolly, they created a 120-cell embryo from them. The embryo was then destroyed, its embryonic stem cells harvested for transfer to injured tissue. This procedure, called therapeutic cloning, and the procedure that was used to create Dolly, called reproductive cloning, are contrasted in the diagram. You can see that steps 1 through 5 are essentially the same for both procedures, but the two methods proceed differently after that.

In reproductive cloning, universally judged to be ethically unacceptable for humans, the blastocyst from step 5 is implanted in a surrogate mother in step 6a, developing into a baby that is genetically identical to the nucleus donor, step 7a .

In therapeutic cloning, by contrast, stem cells from the blastocyst of step 5 are removed and grown in culture, step 6. These stem cells develop into pancreatic islet cells in step 7 and are injected or transplanted into the diabetic patient in step 8, where they begin producing insulin.

Therapeutic cloning, or, more technically, somatic cell nuclear transfer, successfully addresses the key problem that must be solved before embryonic stem cells can be used to repair damaged human tissues, which is immune acceptance. Because stem cells are cloned from the body’s own tissues in therapeutic cloning, they pass the immune system’s “self” identity check, and the body readily accepts them. 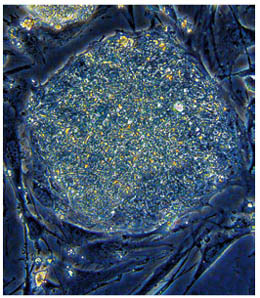 Few advances in science have proven as controversial as embryonic stem cell therapy and the possibility of using therapeutic cloning to achieve it.  It was never going to be easy.  Human embryonic stem cells are very difficult to isolate and establish in culture, but a few dozen lines have been successfully obtained from the inner cell mass of six-day blastocysts. It is important to isolate the cells at this early stage, before development begins the process of restricting what sorts of tissues the stem cells can become. The blastocysts are obtained from reproductive clinics, where some 400,000 excess embryos are stored, left over from helping infertile couples have children by in vitro fertilization.

However, obtaining embryonic stem cells destroys the early embryo in the process; for this reason, stem cell research raises profound ethical issues. The timeless question of when human life begins cannot be avoided when human embryos are being deliberately destroyed. What is the moral standing of a six-day human embryo? In resolving the tension between scientific knowledge and moral sensibilities, religious, philosophical, and cultural issues all come into play. Table 16.1 illustrates the range of issues being discussed.

New experimental results hint at ways around the ethical maze presented by the use of stem cells derived from embryos. In 2007 researchers in two independent laboratories reported that they had engineered embryonic stem-like cells from normal adult human skin cells. Like embryonic stem cells, the cells they created were pluripotentthey could differentiate into all normal adult cell types.

The essential clue came six years earlier, when fusing adult cells with embryonic stem cells transformed the adult cells into pluripotent cells, as if factors had been transmitted to the adult cells that conferred pluripotency. Following up on this,

The 2007 researchers took a guess at what the factors might be, and tried adding them to adult cells. After trying several combinations of factors, they hit pay dirt: in an experiment that electrified researchers worldwide, they introduced genes for just four transcription factors (protein signals that switch ON or OFF the reading of other genes) into adult human skin cells, sending them in  piggy-back on viruses. Once inside, these four factors induced a series of events that led to pluripotency!

Apparently our adult cells retain all of their developmental possibilities after all  its just that the process of “choosing what to be”  has been turned off.. In just this way, a single switch turns the power ON or OFF to your house’s fuse box., at one stroke shutting ON or OFF dozens of other switches, and all the lights in the house. These four transcription factors turned OFF the switch that shut-down the choosing of developmental alternatives, and in so doing turned the developmental lights back on.  Just four factors.  I bet not a scientist on earth thought it was going to be that simple.  But looking to see if it was, is how Nobel Prizes are won.  I have no doubt this work will be rewarded with a Nobel, and soon.

Of course, we haven’t cured anybody yet. From proof-of-principle in a laboratory culture dish to actual medical application is still a leap, but the possibility is exciting.

In another approach, advanced in 2006, a single cell is removed from the eight-cell stage of an early human embryo and is used in an attempt to derive an embryonic stem cell line. The remaining seven cells go on to form a healthy embryo, normal in every respect. The technique of removing one of the eight cells is used in preimplantation genetic diagnosis, performed at fertility clinics around the world to screen for genetic disease. This approach would seem to also avoid most ethical objections and is also being investigated seriously. 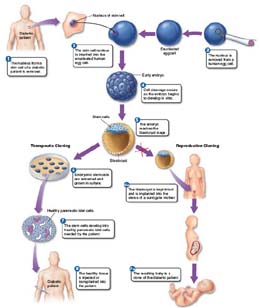