Plants can grow at surprising rates, and for a very long time.  Bamboo plants can grow as fast as three feet per day (or 1.5 inches per hour). At that rate, you could almost watch it grow. The oldest living plant is a Bristlecone Pine located in the White Mountains on the California-Nevada border called Methuselah, which has lived to a ripe old age of 4,767 years.

If plants can grow fast and for a long time, it should come as no surprise that some plants become very tall.  Three types of trees vie for the title of the world’s tallest tree: the Coastal Redwood (Sequoia sempervirens), the Douglas Fir (Pseudotsuga menziesii), and the Australia Mountain Ash (Eucalyptus regnans). Up until the summer of 2006, the title of the “tallest tree” went to a coastal redwood called the Stratosphere Giant that stood a breathtaking 370 feet (112.8 meters) tall.  This towering giant lost its title to not one, but three other coastal redwoods in Redwood National Park.  The tallest of these, and now owner of the title “The World’s Tallest Tree” goes to a redwood called Hyperion that stands at a height of 379.1 feet (115.5 meters).  Laid on its side, this tree would span just over the full length of a football field including the endzones. The stand of trees that contains Hyperion is in a remote location of the forest but its exact position is not being released for fear that an over-flooding of visitors would damage the delicate forest ecosystem that contains this tree.  It is also a very challenging hike to get to the site and could prove very dangerous for the curiosity-seeking public.

As tall as Hyperion is, it is not the tallest tree ever found. The tallest tree was an Australia Mountain Ash, called the RobinsonTree, that was felled in Mt. Baw Baw, Victoria, Australia in 1889. The tree measured 470 feet.  Another Australia Mountain Ash found in 1872 would probably hold the title of the tallest tree every found if not for an unfortunate brush fire that downed the tree and caused the top of the tree (the crown) to break off.  The tree, called the Ferguson Tree, measured 436 feet without its crown, but probably was about 500 feet when standing.

Other trees have impressive statistics, for example the tree with the largest canopy (that is the leafy part of the tree) is a great banyan in Calcutta’s Indian Botanical Garden that covers three acres. But, the granddaddy of all trees, the largest tree in the world and considered to be the largest organism on earth, is a Giant Sequoia named General Sherman, shown on the facing photograph.  While it is not the tallest tree, it is the largest in overall size. Named after the American Civil War leader, General Sherman stands at 274.9 feet (83.8 m), has a maximum base diameter of 36.5 feet (11.1 m) and a 102.6 feet (31.1 m) circumference. It would take over 60 men standing shoulder-to-shoulder to encircle its base. In January of 2006, the largest branch on the tree broke off.  The branch alone was the size of a tree, with a diameter of over 6 feet and 140 feet (30 m) in length.

General Sherman is located in the Giant Forest of Sequoia National Park in California.  The tree was once estimated to be nearly 6,000 years old (conventional wisdom said a tree that big had to be that old) but more accurate datings of the tree suggest that it is perhaps only 2,200 years old.  It is large not because it has been growing for so long, but because it grows so fast, adding more wood each year.  Some have disputed that other sequooia trees, such as the General Grant sequoia in King’s Canyon National Park is larger based on the measuring system used by the American Forests Association, which uses a point system to evaluate trees (a certain number of points assigned to several dimensions).  The AFA continues to score General Sherman higher than other trees because of its massive trunk. The trunk of General Sherman is very unified in size from the base up to the first branch (the trunks of other trees tend to narrow more quickly), giving it a total trunk volume of 52,508 cubic feet, about 4,000 cubic feet more than its nearest competitor.  Like all champions, General Sherman will constantly be challenged for his title, and like the Stratosphere Giant, may one day be knocked off. But, for now it still stands as the largest living organism. 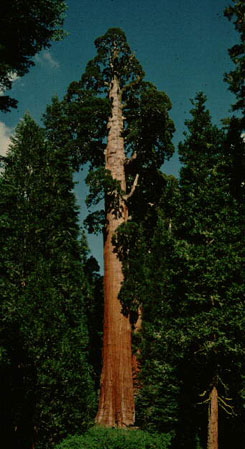 As a point of clarification, General Sherman is a sequoia, which is different from the coastal redwood type of tree that Stratosphere Giant and Hyperion are.  People often confuse the two types of trees because they are both very large trees, they both grow in forests in California, they both have red colored wood, and they at one time were placed in the same genus, Sequoia, but they are different.  The redwood trees continue to have the genus name Sequoia, while General Sherman and other sequoia trees have been assigned the name Sequoiadendron giganteum (although it seems odd to me that the genus name for the giant sequoia was the one changed).

It is important to remember that the primary reason why General Sherman, General Grant, Hyperion, Stratosphere Giant, and other sequoia and redwood trees remain standing is because they are growing in national forests, protected from logging.  More than likely, if these trees were located outside of the national forests, they would have met with the same fate as the Robinson Tree in Australia, cut down at an earlier time for its lumber.

When we consider the massive size of General Sherman and Hyperion, it is impossible to avoid asking “How tall can these trees grow?” Can we expect them to grow another 50, 100, 200 feetor more?  A tree grows tall in a different way than you or I do,  by adding new plant material to its top tip.  If you were to grow this way, it would be like stacking additional hats on the top of your head.  However, a tree can grow broader without becoming taller, adding material around its trunk just like I  have done in middle age.

So, for a tree, is the sky the limit?”  We know that General Sherman will not grow any taller than its 274.9 feet because the top of the tree is dead. This means that there is no more primary growth adding to the height of the tree.

Hyperion however is still growing taller.  How tall can it realistically be expected to grow? Researchers climbed to the tops of towering trees in Humboldt Redwoods State Park and discovered that although water is readily available to their roots, the water has a difficult time reaching the tops of these trees. The pull of gravity and friction that builds up between the water molecules and the walls of the xylem vessels limits how high a column of water can be supported. The high-end for redwoods appears to be about 427 feet (130 meters), some fifty feet shorter than Australian mountain ash trees, which seem to have more efficient xylem piping.

So, how tall will Hyperion get?  According to this research, maybe only another 50 feet, but that is still taller than a 30-story building. That is a long way up indeed!