Almost all cells in the human body undergo cell division, replacing themselves as they wear out. Some adult cells do this quite frequently, others rarely if ever. The cells of the inner lining of the small intestine will replace themselves in a week or less. Red blood cells live for about four months and then are replaced. It will take a year or more before pancreatic cells that make up the pancreas divide. Liver cells don’t usually undergo cell division at all, but if a portion of the liver is removed from a liver transplant donor,the remaining liver tissue will divide to replace the cells that were removed, restoring the liver to its original size.

Skin cells, the subject here, divide quite frequently. Exposed to a lot of wear-and-tear, they divide about every 27 days to replace dead or damaged cells. The skin sloughs off dead cells from the surface and replaces these will new cells from beneath. The average person will lose about 105 pounds of skin by the time he or she turns 70.

While skin can be damaged in many ways, the damage that seems to have the most longterm affect is caused by the sun. The skin contains cells called melanocytes that produce a pigment called melanin when exposed to UV light. Melanin produces a yellow to brown color in the skin. The type of melanin and the amount produced is genetically determined. Fair skinned people have fewer melanocytes and produce melanin that is more yellow in color. Unprotectd by melanin, these people sunburn easily and rarely tan. People with darker skin types have more melanocytes and produce a melanin that is dark brown in color. Protected by UV-absorbing melanin, they almost never burn. This is why tanning was thought to be healthy.

Up until the early 20th century, a tan was a condition that people went to great lengths to avoid. Before the industrial revolution, a tanned body was a sign of the working class, people who had to work in the sun. The wealthy elite avoided the sun with pale skin being in fashion. The Greeks and Roman would use chalks and lead paints to whiten their skin. The women in Elizabethan England would even paint blue lines on their skin to make their skin appear translucent.

All of this changed in the 1920s, when tans became a status symbol, with the wealthy able to travel to warm, sunny destinations, even in the middle of winter. That tan, bronzed glow that people would sit in the sun for hours to achieve was thought to be both healthy and attractive.

During the 1970s, doctors started to see an uptick in the number of cases of melanoma, a deadly form of skin cancer. New cases were increasing about 6% each year. Researchers proposed that UV rays from the sun were the underlying cause of this epidemic of skin cancer and warned people to avoid the sun when possible and protect themselves with sunscreen.
People with fair skin don’t produce very much melanin and so have little natural protection from UV radiation. Cells on the body’s surface that are badly damaged by the sunwhat we call a sunburnslough off. Recall the peeling that you experience after a bad sunburn. 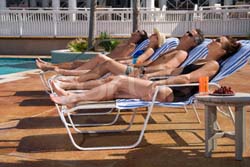 Malignant melanoma is the most deadly of skin cancers, although treatable if caught early. Melanoma is cancer of malanocyte cells. Melanoma lesions usually appear as shades of tan, brown, and black and can begin in or near a mole, and so changes in a mole is a symptom of melanoma. Melanoma is most prevalent in fair-skinned people, but unlike the other forms of skin cancer, it can also affect people with darker complexions.

But the public has been slow to respond to this warning, perhaps because the cosmetic benefits of tanning are immediate while the health hazards are much delayed. The desire to achieve that tanned, bronzed body is as strong as ever.

A good tan requires regular exposure to the sun to maintain it, so indoor tanning salons have become popular. Tanning booths emit concentrated UV rays from two sides, allowing a person to tan in less time and in all weather conditions (sun, rain, snow). The indoor tanning business has grown in the U.S. to a $2 billion-a-year industry with an estimated 28 million Americans tanning annually.

People thought that building up a tan through the use of tanning booths would protect a person’s skin from burning and would reduce the time exposed to the UV radiation; both leading to a reduced risk of skin cancer. However, recent research does not support these assumptions. A 2003 study of 106,000 Scandinavian women showed that exposure to UV rays in a tanning booth as little as once a month can increase your risk of melanoma by 55%, especially when the exposure is during early adulthood. Those women who were in their 20s and used sun lamps to tan were at the highest risk, about 150% higher than those who didn’t use a tanning bed. As with other studies, fair-skinned women were at the greatest risk. In fact, tanning booths, even for those people who tan more easily, heighten the risk for skin cancer because people use the tanning booths year-round, increasing their cummulative exposure.

But, how does sunlight, whether natural or artificial through tanning booths, cause cancer? The effects, as you will see in this chapter, have to do with cell division.