The world leader in applying biotechnology to agriculture, St. Louis’ Monsanto, is in the process of acquiring a little-known cotton seed company, Delta & Pine Land, and with it U.S. patent 5,723,765. This patent covers an ingenious “technology protection system” that can be used to ensure that genetically modified plants produce sterile seeds. The commercial importance of this development to Monsanto cannot be overstated. It will keep farmers who grow soy beans, wheat, rice, and cotton coming back for fresh seeds year after year. Once these farmers grow accustomed to the benefits of genes that fend off assaults from insect pests, herbicides, and bad weather, they will become regular and dependable customers, safeguarding Monsanto’s considerable investment in developing the GM crops.

A storm of protest has arisen over the possibility that Monsanto might utilize this technology protection system, called the “terminator technology” by its critics. Monsanto is quick to point out that they don’t even own the patent yet, and say they are gathering information from an array of sources. They pledge not to commercialize the technology until a thorough review is complete and the company has responded to any concerns raised. However, Monsanto rather pointedly has not renounced its potential use of terminator technology.

Last week Gordon Conway, president of the Rockefeller Foundation, which has a long history of being friendly to biotechnology, publicly asked that Monsanto do just that, arguing that the possible consequences to Third World farmers outweigh any social benefits in protecting innovation. Subsistence farmers are too poor to buy new seed, and thus depend on saving and trading with neighbors. “What the terminator gene does is basically kill the process that lets farmers sow their own seeds,” Conway says.

Wether or not Monsanto heeds Conway’s advice and renounces terminator seed protection technology is a decision that I suspect will have more far-reaching implications for the future of biotechnology in agriculture than any other decision the beleaguered biotechnology company faces.

Just how does terminator technology work? It involves a very clever interaction between three genes that are added to commercial GM seeds.

The toxin gene. The first of these transplanted genes encodes a toxin that kills seeds in their final stage of development. To shut this sterilizing gene off, gene engineers have inserted a DNA security wall between it and the controlling region that activates the gene’s use. The gene cannot generate its toxin as long as the wall is in place.

The scissors gene. The second transplanted gene is a scissors gene that makes an enzyme called recombinase which can cut out the DNA security wall, thus turning on the toxin gene. 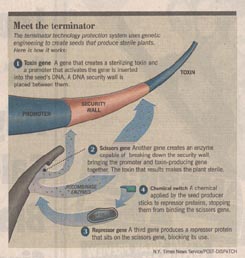 A clever chemical modification of the repressor is the key to the new technology: the repressor protein has been designed by the gene engineers so that it sticks tightly to a specific chemical, in this instance the antibiotic tetracycline. When tetracycline is sprayed by the seed company on “terminator” seeds, the tetracycline ties up the repressor proteins within the seeds, so no repressors are available to sit on scissors genes and shut them down. When these sprayed seeds are planted, the scissors within them are free to do their job, and, when they do, the sterilizing toxin gene is primed to kick in months later when the mature plant makes its own seeds. Any seeds made by the new plant will be sterile.

The terminator technology is one example of a powerful new wave of biotechnology research that uses chemicals as switches to turn specific genes in plants on or off at specific times. Potential uses for such switches abound. For example, instead of planting GM crops that produce insect-killing toxins all the time (as GM corn and cotton do now), the new technology would allow farmers to prevent plants from making the toxin unless a crop is actually threatened with serious insect damage. This is important, because lower everyday levels of toxin in a crop should make it much harder for insects to adapt and become resistant.

Chemical switch technology will undoubtedly have a major impact on biotechnology, as it provides the gene engineer with a very powerful tool, one with many potential uses. It would be unfortunate if the first use was to switch on sterility and, with it, widespread public censure. Monsanto should heed Conway’s advice, and get on with developing other more beneficial applications of this exciting technology.